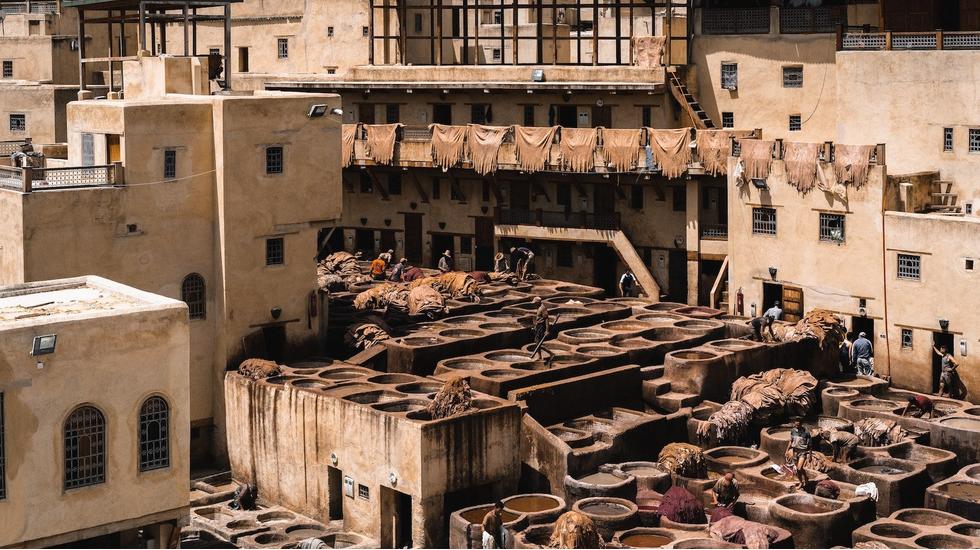 Nevertheless, located between these major cities, Fez offers a colourful blend of Morocco's vibrant culture - so much so that the city has been nicknamed the "Mecca of the West" and the "Athens of Africa". It's the oldest of Morocco's four imperial cities (the others being Marrakech, Meknes and Rabat), making its ancient medina ideal for exploring. This Unesco World Heritage Site is one of the world's largest car-free urban zones; wander through twisting lanes and dodge donkey-drawn carts to find colourful spice markets, sizzling food stalls and hidden doorways leading to rooftops overlooking the city's colourful minarets.

… the Chaouwara Tanneries, where you can watch the process of leather making. Head deep into the clusters of leather shops to get to the heart of the action, and time your visit for the morning when the pits are filled with coloured dye. While the smell might be off-putting (methods from medieval times are still used, employing ingredients such as cow urine and quicklime), this is Fez's most iconic sight.

Once a popular destination for scholars and philosophers, the city is comprised of many buildings that once served as mosques and madrasas (religious schools). Take a keen academic with you, and stop by the University of Al Quaraouiyine - founded in 859, it's the world's oldest continuously functioning university - and the Al Quaraouiyine Mosque, one of Africa's largest centres of worship. While neither are open to tourists, both are worth admiring from the outside. Afterwards, head inside the Al Quaraouiyine Library, it's one of the oldest in the world and home to tomes dating back centuries, such as a ninth-century edition of the Qur'an.

Keen artists or ceramicists make great companions in Fez, too. Ornate pottery and intricate mosaics decorate every street and shop - be sure to drop by Art Naji, where artisans throw pots using clay from the hills surrounding the city, hand-paint crockery and lay out vibrant zellige (mosaic tiles).

Visit in May before temperatures peak, but when the weather is warm enough to wander around souks and gardens.

Stay at Palais Amani for riad-style rooms, views over gardens or the medina and a traditional hammam.

Bargain hunters. Fez was once a popular pit stop for wealthy merchants en route to the Silk Roads and sub-Saharan trade routes, and today many still travel to purchase goods from the medina and artisans' markets.

These lightweight Gucci silk-twill pants will keep you cool in Fez' summer heat, while also blending in to the bright colours of markets and spice stalls.

Direct flights from London to Fez take around 3 hours and 20 mins.