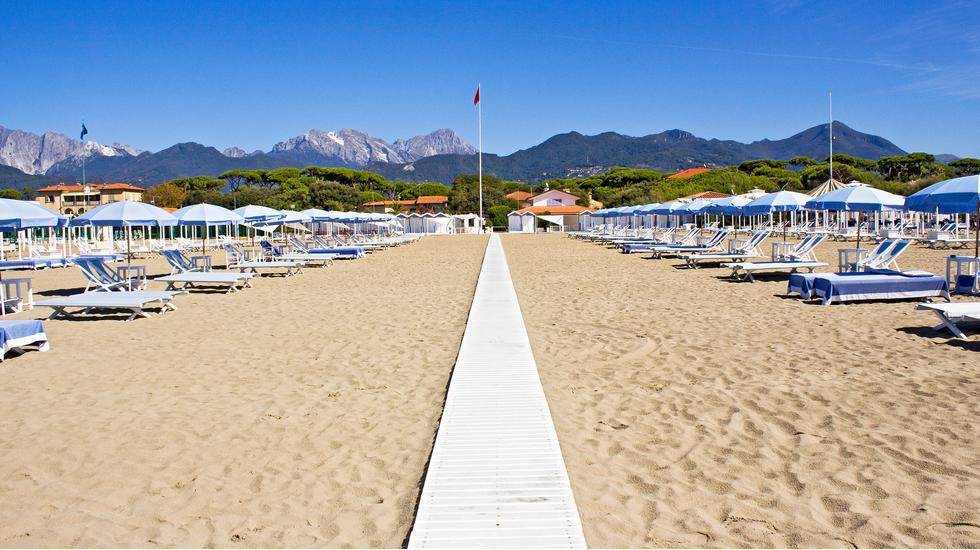 Known Known for its pristine beaches, elegant villas and glamorous people, this little Tuscan town has earned the moniker "fabulous Forte". Wander through the streets lined with countless designer outlets for a spot of window shopping before heading to The Pontile, a long pier built in 1876 that stretches out into the Tyrrhenian Sea.

People-watch from beachfront bars as chic sunbathers amble down to the sand, clad in dresses that billow in the sea breeze, or go to the harbour to admire (read: celeb-spot) any of the larger-than-life yachts gently bobbing in the bay.

Framed by a backdrop of the Apuan Alps, escape the glitz and glamour of Forte's centre and make your way into the town's backcountry for winding paths and long walks amid the mountain woodlands. Come evening, treat yourself with a trip to any of Forte's famed "bagni" (baths) for some serious self-care in the form of spa pools, saunas and steam rooms.

Despite what the exclusive showrooms and Bugatti-filled streets might lead you to believe, Forte dei Marmi is equally as famous for its markets. If you're looking for a bargain, Piazza Marconi hosts a weekly flea market, while Vittoria Apuana in Piazza Dante showcases delicate antiques.

Ideally a friend with deep pockets and an eye for designer deals.

The summer months are when Forte dei Marmi is at its best, but come in July for the annual International Fireworks Festival of Forte dei Marmi. Fireworks light up the sky as top pyrotechnic companies compete in a series of kaleidoscopic performances.

While Forte isn't short of luxury resorts, stay at Albergo Pietrasanta for a hotel differing from its flashy neighbours. Set in a 17th-century palazzo, the hotel is filled with intricate designs and frescoes. Spend days admiring the owner's collection of contemporary art that decorates the walls, before collapsing into a decadent four-poster bed.

Fashion designers such as Giorgio Armani, Paul Smith and Miuccia Prada own expansive properties here, so keep your eyes peeled for celebs working on their tan or browsing the shops.

Confidently strut past designer stores in this floral-print Reformation midi-dress.

Fly to Pisa airport and transfer from there. Or charter your own private yacht, as is often de rigueur here.