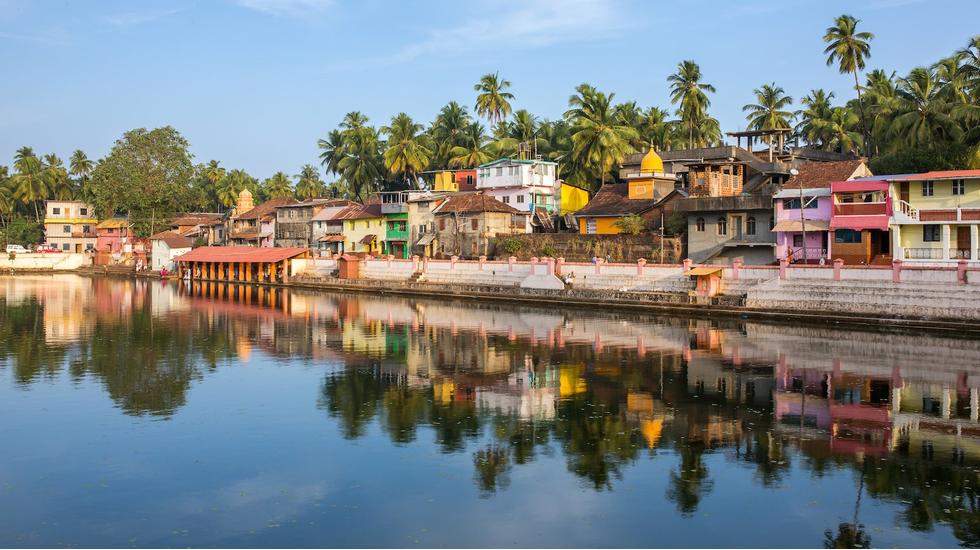 Sandwiched between the glistening Arabian Sea and the dramatic peaks of the Western Ghats, Gokarna is a revered holy corner in western India. For years it has been a place of pilgrimage; worshippers travel across the country to offer prayers and honour the gods in the town's temples. Today, many still make the voyage - but mainly for Gokarna's sun-drenched, golden beaches.

Wander through the narrow, banana tree-lined streets to discover sacred temples dedicated to different deities dotted throughout the town. Enter to marvel at ornate interiors and delicately carved idols before stopping off at family-run cafés and restaurants scattered between these historic places of worship.

Once your culture-cravings have been satisfied, head straight for one of Gokarna's famed beaches. While Om Beach is the most popular, we recommend opting for Half Moon or Paradise beach to have a tranquil spot all to yourself.

Mahabaleshwar is Gokarna's most-visited temple, dedicated to the god Shiva. Dating back to the fourth century, the Hindu temple is built in the classical Dravidian architectural style and is said to bestow good fortune upon those who worship within. Keep an eye out for the statue of Nandi, Shiva's bull, sat just outside the inner chamber.

Someone interested in learning more about new cultures and religions (but one who can also enjoy a lazy afternoon on the beach).

Go in February for the Maha Shivaratri festival. Thousands of pilgrims descend to Gokarna to see giant chariots carrying statues of Lord Shiva and other effigies pulled along the town's main streets. The festival is celebrated for as long as 10 days during which time all of the temples conduct remarkable religious ceremonies.

On the peaceful shores of Om Beach, stay at SwaSwara for a transcendent retreat. Priding itself on tranquil simplicity, this hotel offers an impressive list of yoga, meditation and Ayurvedic spa treatments.

It's a toss up between reverent worshippers and wave-seeking hipsters, but both are more than happy to chat and point out the town's best spots.

This Yvonne S Hippy tiered printed maxi dress will keep you looking respectful as you wander round temples, while its airy, billowing cotton-voile means you'll stay cool in high temperatures.

Flights into Goa International Airport normally involve a brief stopover, and once you're there it's just under four-hour transfer by car to arrive at the sun-drenched paradise of Gokarna.