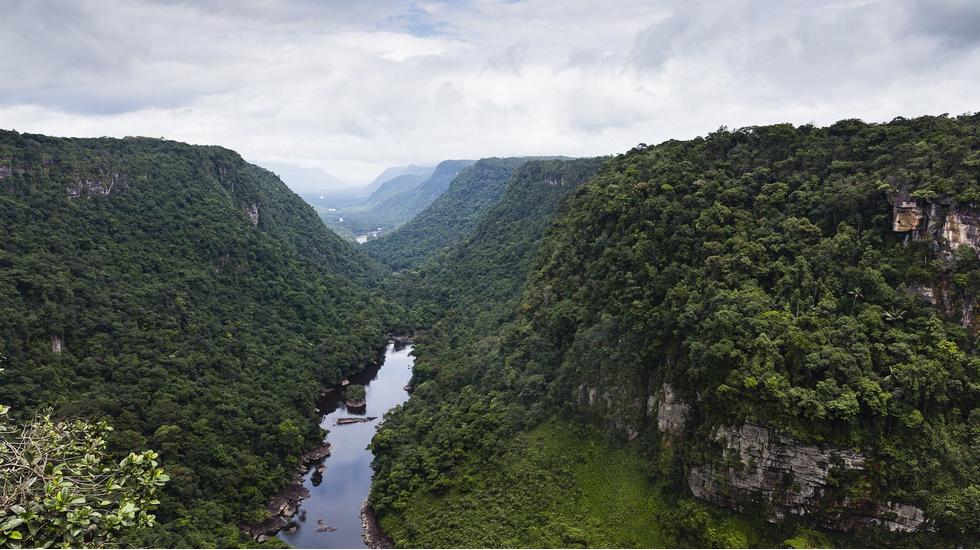 One One of South America's smallest countries, Guyana remains South America's best-kept secret. But as the continent's only English-speaking country complete with diverse coastal plains, towering mountains, arid savannahs and expansive rainforests, it deserves recognition among those seeking a culture-filled retreat.

Despite being sandwiched between Venezuela, Brazil and Suriname, the former British colony has more similarities to nearby Caribbean islands (minus the beaches) than to its South American counterparts. A toe-tapping music scene, colourful architecture and vibrant culinary hotspots can be found around every corner in the capital Georgetown. Further inland, the country's moniker "The Land of Many Waters" can be seen in cascading waterfalls and vast rivers streaming through verdant landscapes - take a day trip to Kaieteur Falls, the largest single-drop waterfall in the world.

… nature. More than 80 per cent of the country is covered in rainforest, some of which is still unexplored. Guyana prides itself on ecotourism and sustainability, so book onto an tour to travel into the depths of the rainforest to find sloths clinging onto tree trunks, swinging spider monkeys and soaring birds of paradise. If you're lucky, you might spot a wild cat - the country is home to jaguars, ocelots, pumas, margays, jaguarundi and oncillas.

Someone who believes in ancient legends. Guyana is said to be home to El Dorado, a mythical golden city in the depths of the rainforest. Despite countless failed expeditions taken to uncover the city (including one led by Sir Walter Raleigh), intrepid adventurers still travel to the country attempting to find the legendary riches.

Come in February for Mashramani festival, Guyana's anniversary of becoming a republic, when parades float down streets, dancers strut through the neighbourhood and steel drum bands play tunes 'til the sun goes down.

Stay at Rewa Eco-Lodge, located in the midst of a small Amerindian community by the Rewa and Rupununi rivers, for the perfect base to explore the surrounding nature and rainforests.

… a Pixar enthusiast. Guyana's highest mountain, Mount Roraima, was the inspiration and setting for part of the film UP. While the mountain makes for a dangerous climb, you can fly a helicopter or small plane around for views of the country and of Venezuela.

Alternatively, if you find yourself deep in the rainforest you might stumble upon Guyana's tribal communities. There are nine indigenous tribes in the country, the Wai Wai, Macushi, Patamona, Lokono, Kalina, Wapishana, Pemon, Akawaio and Warao.

This floaty Mansur Gavriel linen jumpsuit will keep you cool wandering around as you wander Georgetown.