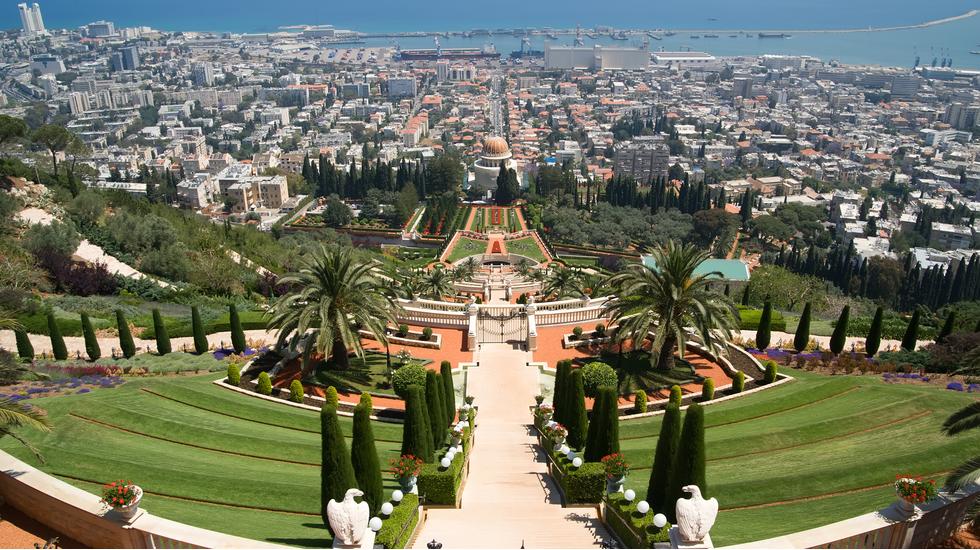 Despite being home to a busy commercial port and Israel's third-largest city, Haifa has the kind of joie de vivre more often associated with a compact holiday resort. Its landscape is made up of a beautiful blend of craggy cliffs, palm-fringed streets and tropical gardens, whose towering blooms look too flawless to be real against the cloudless sky.

To get your bearings in this bustling metropolis, we'd suggest starting by rounding up your gang for a cable-car ride, hopping on and off to take in some spectacular panoramic views of the city. Begin your tour at the Bat Galim Promenade, indulging in some people-watching through the floor-to-ceiling windows en route to the Stella Maris viewpoint, perched high atop Mount Carmel. Fancy a ramble? Buy a one-way ticket and make the return descent on foot - a pleasant 20-minute stroll.

After exploring Haifa's buzzy, colourful streets, head to Unesco World Heritage site Bahá'í Gardens, where 19 perfectly symmetrical (and gloriously green) terraces flank the Shrine of the Báb - burial place of the founders of the Bahá'í religion.

The Dead Sea is just a two-hour train journey away. Here, at the lowest point on Earth, the water's salt concentration is so dense - 35 per cent, to be precise - that life simply cannot survive, hence the name. However, the water's unusual conditions provide some perks, one being that humans can effortlessly float in it. Better yet, doing so brings with it bucketloads of health benefits, from calming skin complaints to helping to cure respiratory conditions.

Stay at The Schumacher. Nicknamed "the Urban Oasis", this boutique hotel flaunts a classic yet contemporary style. We're checking into the room that comes with its own private patio. If you'd prefer views across the expansive hotel gardens, you'll want one of the suites. Whichever you opt for, be sure to explore the surrounding German Colony neighbourhood, which is packed with restaurants and independent shops.

Book a table at Shrtoudl - the sort of place where one dish just won't cut it. Order a handful of sharing plates, in order to get through as many of the expertly prepared seasonal Mediterranean specialities as is humanly possible.

Accessed through a cave-like archway, Archie's Pub is the hottest joint in town. Come between 6.30-9.30pm to savour the fresh, fruity cocktails at happy-hour prices.

Planning your first getaway with your other half? Romantic Haifa is for you.

Visit from April to July or September through November for plenty of blissful sunshine - minus the high-summer humidity.

This Hunza G seersucker swimsuit will keep you both looking and feeling cool when lounging poolside.

Fly to Tel Aviv's Ben Gurion International Airport, from where it's a 90-minute direct train journey to Haifa.