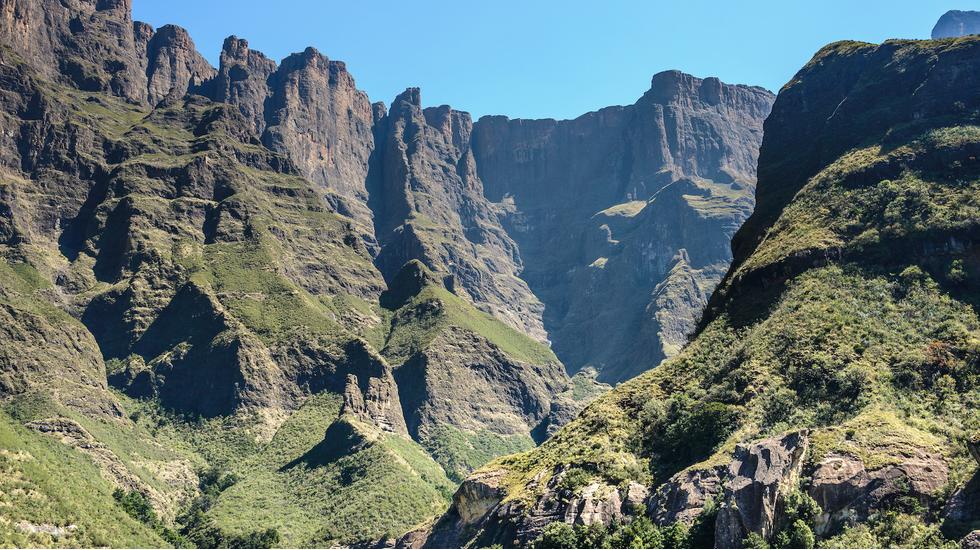 This This diverse South African province offers days that differ drastically from one to the next. Located on the country's east coast, the region is centred around Durban, the capital of KZN. With its distinct Asian atmosphere (the city has the largest Indian concentration of people outside of India) and cosmopolitan feel, Durban is a prime spot to settle in to KZN life. Amble along the promenade drinking and dining at any of the waterfront venues, and hop your way along beaches lining the Golden Mile.

Yet it's the wildlife that is among KZN's biggest selling points. Head out to one of the region's safari parks to immerse yourself in the African landscape. Hluhluwe-iMfolozi Park and Tembe Elephant Park offer some of the best safari experiences, but those interested in seeing more than the big five should opt for uMkhuze Game Reserve, where more than 400 species of birds perch on treetops and flock through the skies.

Have a taste for adventure? Trek out to The Drakensberg (meaning Mountains of Dragons). As well as providing a staggering backdrop to the province, the area is home to dramatic peaks, cascading waterfalls and views across KZN's reserves. Hike up cliff faces to stumble upon national parks tucked between mountains - the Royal Natal National Park and Giant's Castle are our favourites.

… KZN's "big seven". While most visit safaris to catch a glimpse of elephants, rhinos, lions, leopards and buffalos, this South African hotspot also offers the opportunity to spot the southern right whale and the great white shark. Those who can't get enough of nature should head to the Unesco World Heritage Site of iSimangaliso Wetland Park. Here, choose between Kosi Bay for coastal lakes and estuaries filled with colourful fish (as well as hippos, Zambezi sharks, flamingos and even a few crocodiles), and Sodwana Bay for coastal treks keeping a look out for dolphins and turtles en route.

Someone keen to work up a sweat, but also happy to kick back with a cocktail on the beach. Stroll along Durban's Golden Mile for 5km of sandy beaches with plenty of surfing, paddling, water sports and sunbathing opportunities.

The homeland of the Zulu, KwaZulu-Natal is best visited in September when the Reed Dance and King Shaka Day, two of the main Zulu festivals, take place. Spend time learning about the Zulu's ancient culture and history - visit traditional villages and find out about the challenges facing the tribe today.

Teremok Marine is a boutique lodge sitting pretty among the palm and giant milkwood trees of KwaZulu-Natal. Come for suites with balconies overlooking the rugged landscape and a tranquil spa.

Archaeologists and explorers getting lost in the Drakensberg. It was home to the San people for centuries, and evidence of their lives can be seen through ancient rock art dotted throughout the cliffs. Stop by Game Pass Shelter and Battle Cave to ogle at depictions of humans, animals and mythical scenes.

These stretch shorts and Topanga stretch sports bra from Girlfriend Collective are perfect for hiking up mountains and trekking through national parks.

You can fly direct from London into Durban's King Shaka International Airport, only a half-hour drive from the city centre.