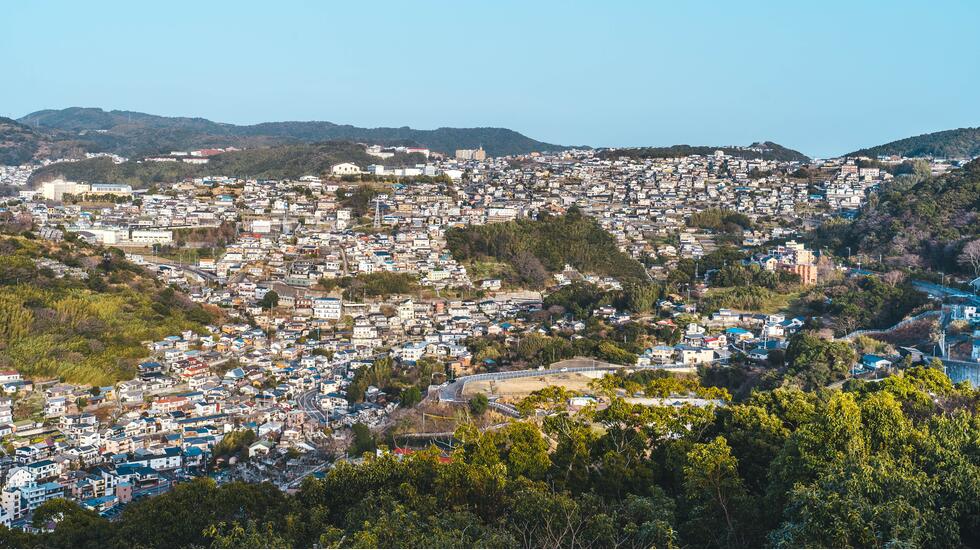 Bordered by Isahaya and Saikai, the port city of Nagaski is located on the tranquil island of Kyushu. Japan's largest trading hub during the 15th and 16th centuries, its streets are home to a unique cultural blend. It was in 1570 that the Portuguese sailed into what was then a sleepy fishing village with a dinky population of just 1,500, bringing with them fabrics, textiles and precious delicacies from Europe. Before long, Nagasaki was home to Catholic churches, western-influenced architecture and a dynamic food scene. Fast forward to 2022, and the city is yet to be taken over by big-name chains or hip hotel groups - this remains a destination that honours its heritage. As Japan reopens its borders, we take a tour to bring you the inside scoop on where to eat, stay, drink and play when in town.

There are 552 named mountains in Nagasaki prefecture, the highest and most recognisable of which is Heisei Shin'yama. Keen hikers should take the challenging 8.4km Mount Fugen-dake trail, which takes an average of four hours to complete. The unparalleled views from Nagasaki's highest trekkable peak make every step worth it.

Saving your visit for 2023? The legendary Nagasaki Lantern Festival takes place in the second half of February. The two-week celebration of Chinese New Year sees more than 15,000 ornate lanterns light up the city. Our favourite places to watch the spectacle from are Kanko-dori Arcade and Central Park.

The devastation of Nagasaki at the end of the Second World War has not defined the modern-day city, but is remembered at the Nagasaki Atomic Bomb Museum.

Tsuki to Umi. Located in the port town of Motegi, this sea-facing ryokan exudes Japanese creativity. All 14 individually designed rooms carry the same minimalist palette: clean-lined expanses of light woods, brushed-concrete walls, matt-black accents and neutral linens. Finer details such as potted dried plants, bed frames with fixed pendant reading lights and coffee tables stacked with hand-picked reading materials make for a calming oasis. Our favourite feature? The enormous windows, which showcase uninterrupted views of the ocean. Leave your curtains open and wake gently to coral-hued sunbeams tickling your face. Slip downstairs to the dock-shaped lounge to enjoy an early-morning brew, or take a pre-breakfast wander through the nature-filled courtyard.

Dining in a former brothel might not sound like the most appetising of scenarios, but hear us out. Housed within the Hiketaya brothel, Kagetsu opened in 1642, when courtesans were the only Japanese citizens allowed to enter the Dutch settlement in Nagasaki Bay. These women were responsible for shippoku, a new kind of banquet dining that fused elements of Chinese, Dutch and Portuguese cuisine - a culinary heritage that Kagetsu's menu pays tribute to in its sublime tempura and braised pork dishes. The location is worthy of a visit in its own right, with nine unique rooms dating back to the Genroku period and a serene Japanese garden that changes with the seasons - think cherry blossoms, azaleas and vividly coloured leaves.

There isn't exactly an abundance of drinking dens in Nagasaki: plenty of local watering holes are all gritty interiors, spirits-only menus and old-school locals propping up the bar. Not so at basement club Panic Paradise, which is loved by local musicians thanks to its superb soundtrack, or the slick Bar Nagare, which serves snacks, cocktails and more than 80 kinds of craft beer.

Other than someone who's been surfing flight websites hourly since Japan's borders reopened? That mate who has an entire Notes page dedicated to the best ramen spots in London. They'll be delighted to participate in noodle-hopping across the city.

Coat season is well and truly underway, and we can't think of any better staple to take us from ryokan to shokudo than this Frankie Shop cotton-canvas trench coat. Nagasaki's subtropical climate makes for seriously humid conditions, so we recommend packing lighter linens and breathable fabrics - and checking the forecast first, obvs.

There are no direct flights from the UK to Nagasaki. We suggest flying from London Heathrow to Tokyo's Haneda Airport with British Airways, then jumping on a two-hour connecting flight to Nagasaki. It's a 40-minute drive from the airport to the city centre.