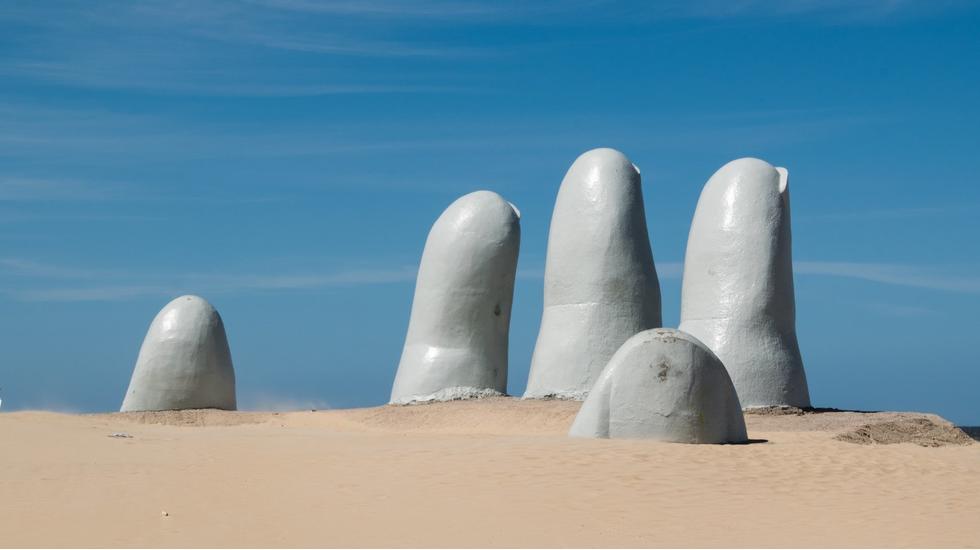 The St Tropez of South America, the Hamptons of the South, the Pearl of the Atlantic… endless fond nicknames have been given to the ritzy resort city of Punta del Este. Pairing its iconic cityscape and vibrant nightlife scene with vast countryside on one side and coastal charm on the other, it is much more than just a quick beach stop-off.

There are more than 20 miles of white-sand beaches here, so rise early to nab a good spot or spend days hopping between them to find your favourite. Playa Mansa - meaning calm beach - is perfect catching some rays and celebrity-spotting, while Playa Brava is best known for its waves, and is popular among surfers and thrill seekers. Come evening, head to Punta Ballena to watch the sun go down across the city.

Punta del Este's famed shopping scene. Head to the chic neighbourhood of La Barra to discover quaint boutiques, or Gorlero Avenue for an artisanal clothing, curios and a local food market. After a successful morning shopping, catch a boat from the harbour to spend the afternoon on Punta del Este's neighbouring islands. Isla Gorriti has pristine beaches rimmed by rugged greenery and crumbling forts, while Isla de Lobos is home to South America's tallest lighthouse, as well as the world's second largest southern sea-lion colony.

Someone who enjoys an evening discovering nightlife. Head to the yacht harbour, where locals and tourists unite over cocktails and good music. If you're looking for something less glitzy, Manantiales has some local drinking dens where hours disappear as quickly as the drinks.

High season is between December and January, but the city is often overrun with holidaying South Americans at this time. Visit in March for warm weather and quiet streets.

José Ignacio is perfectly placed outside of the bustling centre, but not too far away from the action. Stay at Estancia Vik José Ignacio for a sparkling-white dream-like resort. There are only 12 suites, each designed by local artists and adorned with modern art. Laze by the black-granite swimming pool in the courtyard and dine on local barbecued dishes cooked on the fire pit in the hotel's brick-vaulted dining room.

The resort is loved by many sun-seeking celebs - Shakira often wanders along the city's sandy shores.

The sun gets very hot around lunchtime, so bring a big hat to protect your head from the heat. This Bettie grosgrain-trimmed hat by Eugenia Kim is perfect for getting some respite from the Uruguayan rays.

Discover More
Move Over Rio: Why Uruguay Carnival is the New Place to Party
Read now