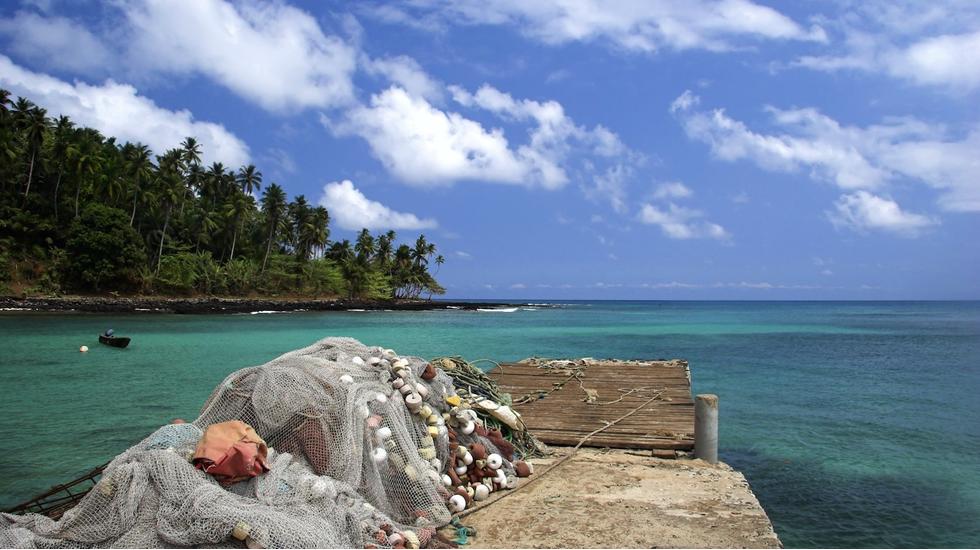 São Tomé and Príncipe, two tiny islands in the Atlantic Ocean that over the past 500 years have been: one of the main centres for the organised slave trade; the largest producers of cocoa in the world under Portuguese colonisers; and world leaders in sugar cane production. They are now among Africa's most stable and democratic countries, as well as one of the continent's best-kept secrets.

With TAP's frequent flights from London, via Lisbon and Accra, São Tomé is an easy trip in the same time zone as the UK, and it's worth getting there before everyone else does. The islands are tiny and luscious, with both black-sand volcanic and white-sand beaches; rainforests full of animals, birds and plants, many of which are endemic and make you think of a land that time forgot - think spiky palm trees and dinosaur-like lizards. There is so much more to see and do than the size of the islands would suggest, including snorkelling, fishing, scuba diving and whale or dolphin watching; trekking through the jungles or up the famously phallic Pico São Tomé mountain or getting involved in local culture through the Portuguese- and African-influenced music, food and art.

The short dry season is from December to February, and the long dry season is from June to September. You can visit all year round, although the mosquitoes come out in force in the wet seasons, so remember your malaria pills. If you're a carnival fan, then the dry seasons are for you. Diving season is December to March, and the whales cruise around between July and September, with turtles nesting on the beaches from September to March. Game fishing is best between May and December, with marlin, tuna, wahoo, dorado and sailfish in abundance at different times during the fishing months.

Explorers. The islands are Africa's second smallest country and their limited infrastructure means that if you want an adventure, you won't have to look far. There are three flights a week from São Tomé to Príncipe, which has even fewer tourists, so if you're the kind of person who wants to kayak the perimeter or find a new trek into the forest, you can guarantee you'll be one of the first to do it.

The chocolate. The islands were once the largest producer of cocoa in the world, and although cocoa growing is now done by smaller farmers (with much of it exported) some is made into chocolate on the island. You can visit a chocolate factory in São Tomé town - try the bars made with fresh cocoa nibs, or their chocolate and coffee blends. Just make sure you let it warm up before you eat it - not hard in a climate like São Tomé's - for the full flavour of pure chocolate. If food is your thing, take a trip to Roça São João, a rural ecotourism plantation venture, even if it's only for their tasting menu that blends modern cooking with local ingredients and a Portuguese influence, and includes a course made from chocolate, black pepper, and red wine.

The hundreds of crabs, which scuttle from the beaches in the evenings to spend the night in the rainforest. They carpet the roads by dusk, and it takes a skilled driver not to squash one or two in a journey.

A map and your sign language skills. There are no detailed tourist maps of either island, and most visitors hire a little Suzuki Jimny to go exploring. It's hard to get lost on the one road that rings São Tomé, but print yourself a Google map before you go so that you know you're heading in the right direction to the empty beach you've chosen for the day. Santomeans speak local languages and Portuguese, with some French, so unless you're pretty confident you can get by with one of those, a Point It book will come in handy. Buy yourself a local SIM card when you arrive so that you can make calls, although don't hold out much hope for internet access unless you're in one of the bigger hotels.