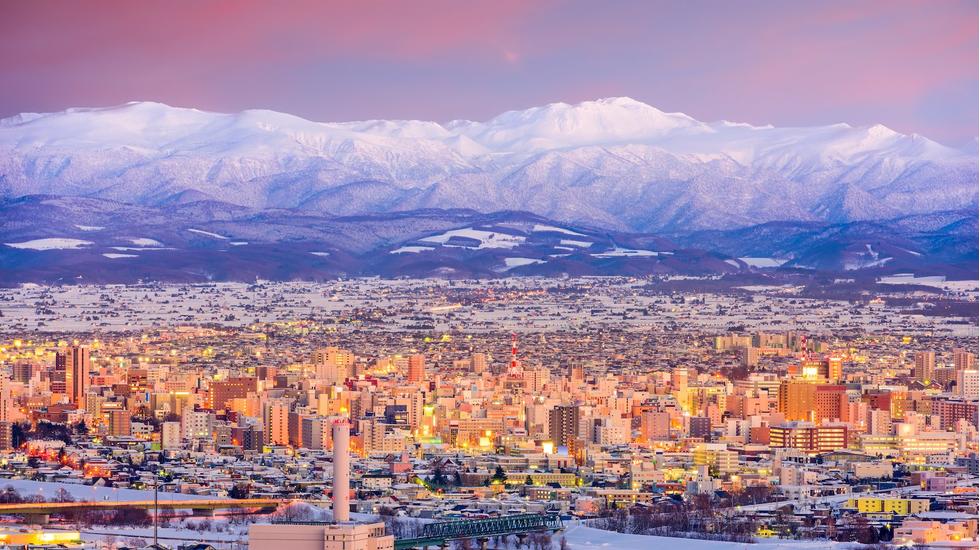 There are also the ski resorts (our top picks are Teine and Niseko) whose fat, powdery slopes put those of its Alpine brethren to shame. There's Mount Moiwa, a craggy edifice speckled with traditional restaurants and panoramic views.

Down in the city centre, try your hand at the age-old art of ice-fishing before washing down your catch with lashings of Sapporo's renowned beer. Then there are the island's famous hot springs. Where better to ride out a hangover than at one of these natural enclaves?

The Sapporo Snow Festival, of course. There are three main venues to hit up. The two-kilometre stretch in Ōdōri Park is the main draw; here, expect to find multi-storey architectural feats made entirely from ice. They're magnificent islands in a glacial stream of shuffling tourists so allow plenty of time for this one. Then there's Tsudome, where children (and big kids) can grab inflatable sledges and whizz down snow slides, which appear as rippling ribbons hewed into hulking great blocks of ice.

Our favourite site, however, is Susukino. The area's known as Sapporo's red-light district but there's a warren of bars, gay clubs and characterful watering holes to explore - consider it the Soho of Sapporo - either before or after you've toured its ice displays which are luminescent come nightfall.

Craft-ale connoisseurs. Sapporo is famed for its breweries and even has a museum dedicated to this age-old tradition. The neighbouring Sapporo Beer Garden serves a mean jingisukan, a grilled mutton dish native to Hokkaido and named after Genghis Khan.

Sapporo's known for coming alive in winter, between late December and mid-March. In summer, the low humidity and high temperatures (average 30°C) mean that it's popular among domestic city-breakers.

Rooms at Hotel Potmum are nice but perfunctory; instead, we suggest worming your way into one of its dormitory-style sleeper capsules. The hotel has an industrial but cosy feel - think glossy concrete floors softened by wood burners - and is a convenient five-minute stroll from Kikusui subway station.

Winter-sports enthusiasts - the types who throw "gnarly" and "dude" into a conversation without even the slightest hint of irony and have, or once had, an eyebrow piercing. Epic.

Temperatures can drop to as low as minus 15°C, so winter visitors will need a puffy coat par excellence. We're saving up for one of Pangaia's which are stuffed with dried flowers - an animal-friendly alternative to down and free from the toxic petrochemicals found in most vegan substitutes.

A bullet train from Tokyo will take you to Shin-Hakodate-Hokuto, on the edge of Hokkaido. From here, hop on the Super Hokuto Limited Express train into Sapporo. Otherwise, it's a one-and-a-half-hour direct flight from Tokyo or two hours from Osaka.