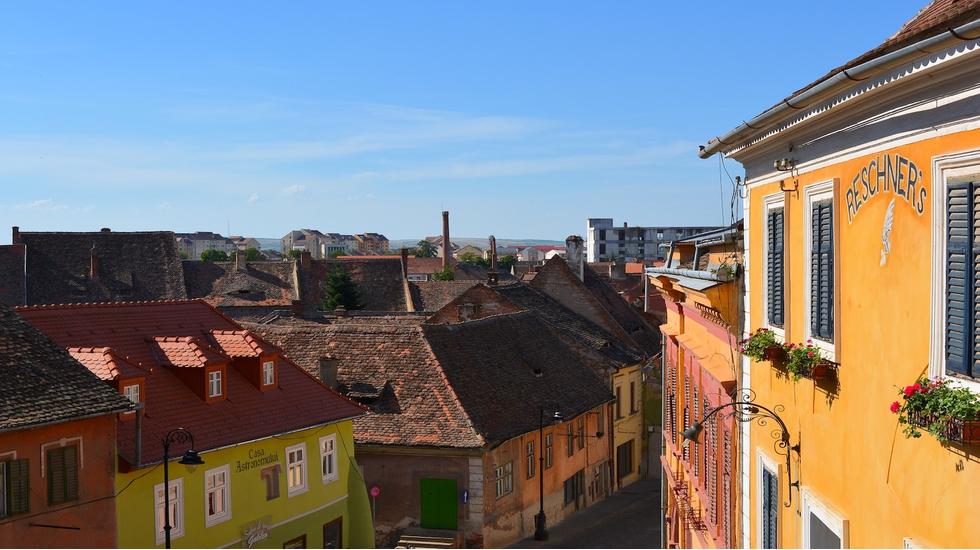 Look Look beyond the church spires and cobbled streets to find an Eastern European city bursting with creative and entrepreneurial energy.

From afar, Sibiu's rust-coloured roofs and shooting church spires look like many other storybook Eastern European cities - it could be Prague, Budapest or Krakow. But then you realise this medieval city cocooned at the foothills of the Cindrel Mountains in southern Transylvania exudes a pioneering and creative energy that pushes it to the forefront of Romania's cultural scene.

A city best explored on foot, stroll through the art-nouveau Upper Town that once housed aristocrats and the religious elite and then the more ramshackle Lower Town, once the home of merchants and craftsmen. Nip between the Stairs Passage - a winding slope built for oxcarts in the 13th century - for the best views of the city, then cross the Lying Bridge, the city's emblem. Pass by the houses decorated with watchful eyes, which locals once believed were used by Communists to spy on them. Then tick off Romania's lists of firsts: the first hospital, school, library and pharmacy were all built within Sibiu's medieval walls.

Creatives will feel at home here. It's once-prolific history as a trade centre lives on through the many glass, wood and ceramic workshops that line the labyrinth of alleyways. As does its fierce bohemian spirit; artists and buskers dance through the streets, artisan coffee shops are concealed within the citadel walls and some of the city's top wine bars are buried beneath elaborately decorated homes that once belonged to Sibiu's elite. Come summertime, the cobbled paths pave the way to al-fresco theatre productions and jazz bands pitching up in secret courtyards.

Bed down at Artisans Boutique Villa. Located in the former goldsmiths district, the 17th-century neoclassical building pays homage to the city's artistic past with its sculpture-filled rooms.

Where to go for dinner…

Reserve a table at 8PM at Hermania Restaurant. Dig into classic Romania dishes such as steak with forest sauce (a fruity, boozy upgrade on the humble peppercorn), mustard-crusted trout fillet and tripe soup (much more pleasant than it sounds). All produce comes from the restaurant's neighbouring farms and is available to purchase should you want to show off your culinary skills back home. Although you should probably pass on packing the tripe...

The surrounding countryside is awash with family-run vineyards. Sample some of Romania's grapes - accompanied by a cheese platter stacked with locally sourced sheep and buffalo cheeses - at Weinkeller. Steal a spot in the vine-covered courtyard when the weather allows.

What about on a Sunday morning?

Sibiu has a thing for doughnuts - the avant-garde kind. Pick them up from Donutartie and head to the lake at the centre of Dumbrava Sibiului Natural Park to hire a rowing boat. Afterwards, pass by the mills, villages and farms of the Museum of Traditional Folk Civilisations, which hosts the largest open-air ethnographic exhibition in Europe.

Your friend who lets you borrow their gallery membership at the weekend. They'll appreciate the city's art-nouveau architecture and won't mind nipping in and out of the artisan workshops-cum-galleries with you.

The city is resplendent in summer. Depending on your likes, coincide trips around the Sibiu International Theatre Festival (12-21 June) or the ARTmania Festival (24-25 July).

A good pair of blister-busting kicks. These Nike React Element 55's should keep you on your feet all day.

Fly to Bucharest, then get a four-hour bus to Sibiu. Don't worry, the buses are of high standard and the drive is a scenic one.