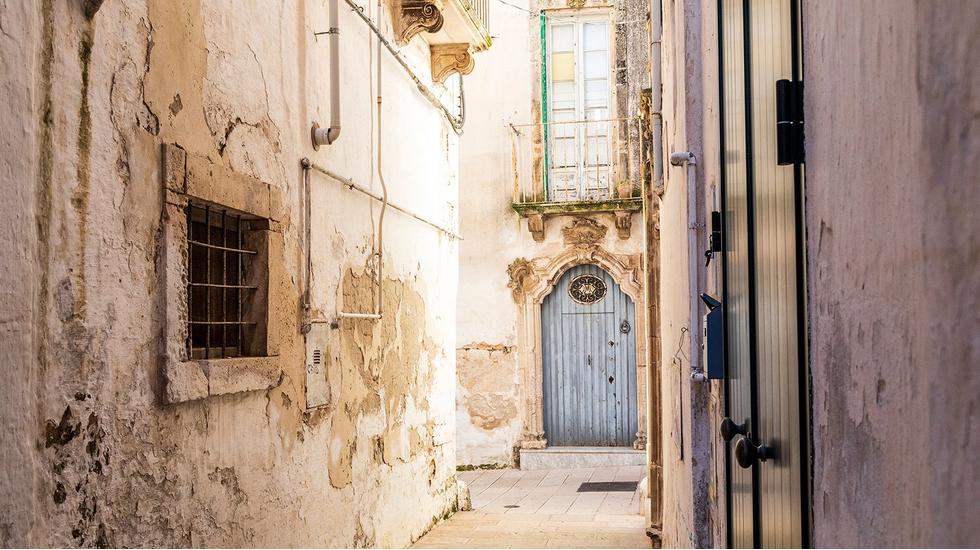 Framed by the glistening Ioanian, this ancient city dates back to the eighth century BCE. Taranto pairs its historic old town with an impressive modern centre and a bustling industrial hub. Spend mornings here sipping espressos in the Borgo Nuovo and strolling around the sprawling fish market, and afternoons lazing on Taranto's sandy beaches.

The city's major drawing point, however, is the old quarter. Cross the Ponte di Porta Napoli to reach the old town, where crumbling ruins and centuries-old buildings provide a sharp contrast to the grid-like layout of the modern districts.

At its gateway stands the Castello Aragonese, a fortress designed to defend the bridge and house prisoners. While the castle itself dates from the 15th century, fortifications have been on the site since the fourth century BCE when Greeks occupied the area.

Nearby in the Piazza Castello lie the crumbling remains of the sixth-century BCE Temple of Poseidon, while the romanesque Taranto Cathedral houses delicate marble statues and intricate frescoes.

A trip to the Museo Nazionale Archeologico di Taranto is a must see. Located down a side street in the bustling city centre, the museum contains some of Italy's most important objects and artefacts such as the world's largest collection of Greek terracotta figures in the world, collections of ancient glassware and Magna Graecia-era jewellery.

Someone happy to spend hours getting lost in the old town's cobbled alleys - but also keen to explore the Borgo Nuovo's lively bar scene come evening.

Italy's Apuglian region can reach unbearable temperatures during summer months, so come in September when the heat starts to ease up.

Arched stone ceilings, original 19th-century frescoes and views of the sea make boutique hotel L'Arcangelo the perfect base for a stay in the historic city.

Archaeologists brushing up on ancient Roman and Greek history.

Throw on this Rixo Denise floral-print silk midi dress for a get-up-and-go outfit that'll keep you cool as you amble through Taranto's warm streets.

Fly into Brindisi airport, where you can drive to Taranto in under one hour.