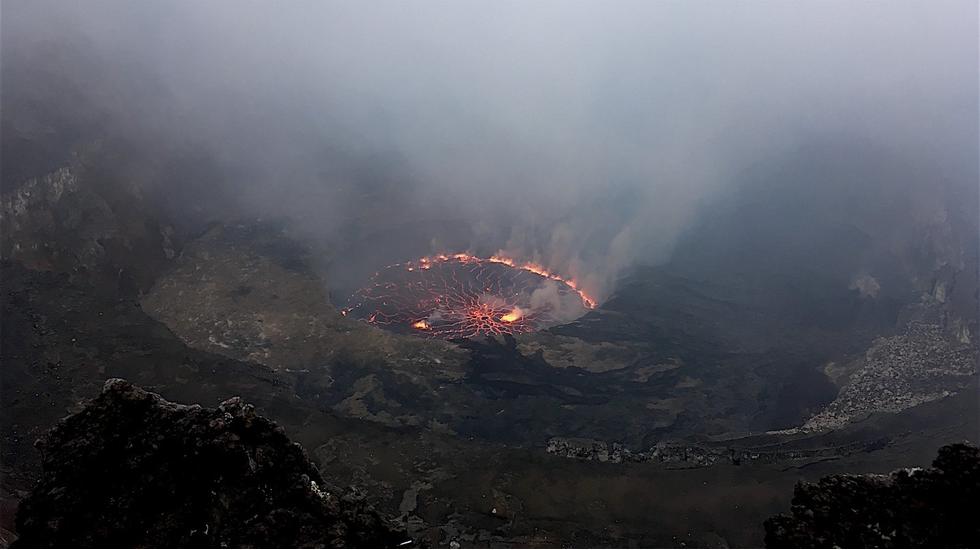 Virunga National Park, a 3,000-square-mile park on the eastern border of the Democratic Republic of the Congo, formerly known as Albert National Park.

According to NASA the DRC is the lightning capital of the world, and this is a pretty good metaphor for the magical unpredictability of the country. While there's no denying DRC's violent and chequered past - refugees, poaching and oil extraction have all had significant human and environmental impact, with unrest continuing due to President Joseph Kabila's refusal to step down - Virunga has restructured and is now open to tourists. At least 30% of park revenue is reinvested into community projects such as schools, as well as into gorilla and elephant protection. This means there is no better time to visit; the park is still largely unexplored and unspoilt, with park fees going towards preserving the wild beauty of one of the most vulnerable UNESCO World Heritage sites on the planet.

During the cooler, drier seasons, which run from June to October and December to January.

If you only do one thing (not recommended), climb Mount Nyiragongo, an active volcano that last erupted in 2002. The walk to the 3,470 metre summit starts from the Kibati patrol post and takes between four and six hours, with frequent stops to eat, rest and take in views over Goma and the surrounding volcanic landscape. Spend the night in a summit shelter overlooking the world's largest crater lake. If Mount Nyiragongo isn't high enough for you, the park is also home to the Rwenzori Mountains or the "Mountains of the Moon" which are up to 5,109 metres tall, with the largest glaciers in Africa. These are a little more difficult to access (usually requiring a flight from Goma to Beni), and you'll need to be well prepared, bringing your own gear and food.

The park is enormous and has exceptional biodiversity, with more mammal, bird and reptile species than any other protected area in Africa, including savanna and forest elephants, okapi, giraffe, buffalo and eastern lowland gorillas. Virunga has done some very successful conservation work in order to secure the remaining populations of chimpanzees and mountain gorillas, and it's these animals that most people come to see. Treks to see the mountain gorillas start from Bukima Tented Camp and take a couple of hours in each direction - there are several families of varying sizes, and you'll spend an hour with them in their natural habitat. Chimpanzee walks start from Mikeno Lodge, joining a team trained by the Frankfurt Zoological Society.

After all this activity you'll want to relax, and Tchegera Island - once a volcano but now a lake surrounded by a crescent of the volcano's remaining rim - is a perfect place to do so, as well as being a popular lunch destination for UN workers based in Goma. The island has a tented camp for those who want to stay, and you can explore the wildlife on foot, by kayak or paddle board. Boats are organised by the park and leave from Goma by prior arrangement.

A deity from an age gone by. At night you can see the red glow from the top of Mount Nyiragongo, bringing to mind the fiery wrath of the ancient gods.

An entomologist. The beetles in the park haven't been properly examined or classified since the 1960s, so there are plenty of species waiting to be discovered.

The easiest way to book your trip is through the park itself as they run the camps and activities, and will organise your transport. There are currently flights into Goma, but it's quite easy to cross via a land border - the most hassle-free is between Gisenyi in Rwanda and Goma in the DRC, where you can arrange to be picked up by park staff. Buses from Kigali to Gisenyi are cheap and easy, and will give you time to spend an evening on the Rwandan side of Lake Kivu, which we highly recommend. Visa requirements are prone to change, but at the time of writing it is possible to get a 14-day tourist visa to allow entry to the park (you'll need to apply and pay for this in advance, which can also be done through the park). Be aware that anyone leaving from Goma airport is subject to a $50 leaving tax.

Keep up to date with the latest news coming from the DRC. The eastern region of the country, where Virunga is located, is still home to armed rebel groups so it's worth being up to date with the political situation. It's better to book your trip with a tour company who know how to keep you safe and will arrange armed escorts where necessary, and don't forget to take out comprehensive travel insurance with a company that covers high-risk destinations. To get you in the mood before your trip, watch the BAFTA-nominated film "Virunga" by Orlando von Einsiedel, which documents the lives of the park rangers and the park director, Emmanuel de Merode, as they work to conserve the area and its animals in the face of the 2012 M23 Rebellion and the activities of the Soco International oil company. As with most countries in Africa, you'll need to show your yellow fever certificate at the border, so make sure it's in date.