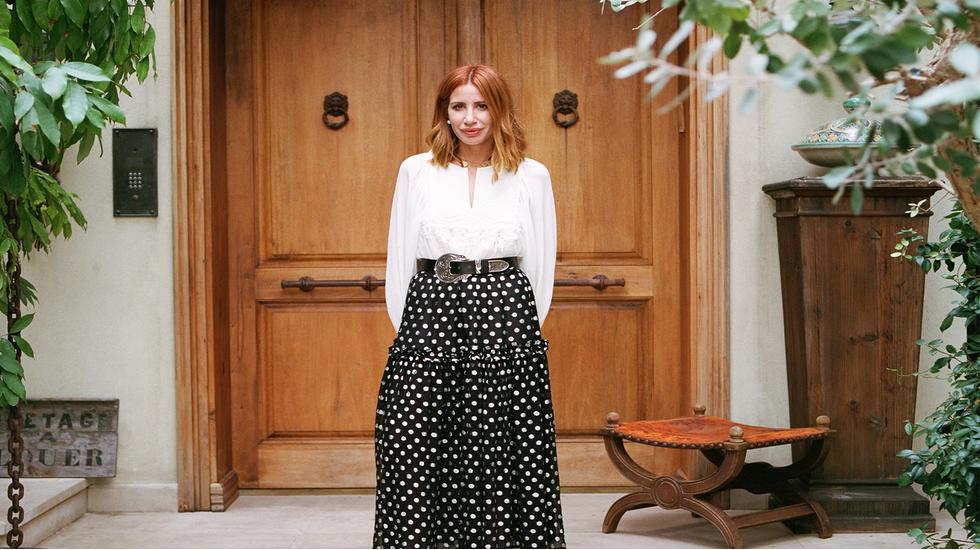 Israeli designers to look out for include…

Where should we go to relax?

The beach is my first choice - I usually go there in the afternoon with my daughters. We go to a quiet spot in the north of Tel Aviv and stay until the evening for dinner at the Kahol. When I have a lot on my mind, I usually go there to think and relax.

Where is your favourite hotel to wake up in in Tel Aviv?

The Norman, Dan Hotel and again, The Jaffa Hotel.

What should we take home as a souvenir?

Happiness - and a jar of tahini.

One misconception about Tel Aviv is…

That it is dangerous or scary here.

Underrated spots worth a visit…

Port Said, where locals eat and drink on the street, is a special spot. For food, head to Beit Romano, which serves up dishes in carton boxes - just don't come in heels, it's not that kind of vibe.

Are there any day trips away that you would recommend?

And finally, what's in your SUITCASE for a trip to Tel Aviv?

Simple and easy outfits; you don't want to have any restrictions.

Israeli Israeli actress-turned-designer Dorit Bar Or (nickname "Dodo") has been busy proving that kaftans are not just for the beach since her eponymous line launched in 2009.

Dodo's luxurious holiday wear, which comes ordained in tassels and pom poms, proves that a) the designer is no stranger to a haberdashery and b) tradition and trendsetting can exist in tandem. Her cult pieces include classic keffiyeh-print kaftans and maxi dresses that are perfect for beach cities like Tel Aviv, her hometown and a huge source of inspiration for the designer. While the Middle East is her most immediate point of reference, Dodo takes a wide-cast and practical approach to her designs, experimenting with fabrics and embroidery to suit a variety of occasions.

We met Dodo to discuss the changing face of Tel Aviv, the latest openings and where to head beyond the city. According to Dodo, the city has become something of a mini Ibiza- say no more, our swimsuits are packed (plus a Dodo Bar Or kaftan, naturally).

How should we spend 24 hours in Tel Aviv?

Meet for breakfast at the Montefiore Hotel and spend the rest of the day at LaLa Land beach. Catch the sun going down at Manta Ray beach overlooking Jaffa before grabbing dinner at Cantina restaurant.

Where can we find the best food in town?

Dallal- which in Arabic translates as prosperity, indulgence and a meeting place revolving around good food - is a perfect combination of these three things. Great for dinner with friends, it's chic but relaxed and their slow-cooked lamb is particularly delicious. The Salon is great for a taste of contemporary Israeli cuisine but is only open on Wednesdays, so you'll need to book in advance. Some other great options are Taizu (an Asian restaurant) and The Jaffa Hotel, which has just opened its new restaurant, Don Camillo, which has ties to Carbon in New York.

Where should we go for an aperitif?

After-dinner drinks are much more popular in Tel Aviv. Head to the Shalvata at Tel Aviv port or H'aoman. If you do head for a pre-dinner drink, then the beach at Manta Ray, Port Said and The Chapel Jaffa are your best ports of call.

Where can we get a feel for local culture?

The Jaffa flea market is a real mishmash of cultures. Here you'll find a variety of cuisines and bars where you can sit on the side of the road, as well as a number of up-and-coming designer boutiques and some amazing homewares shops.

Where does the inspiration for your designs come from?

I always try to stay loyal to myself, my art and where I come from. Combining the cultures I have absorbed over the years - my Middle Eastern culture and Mediterranean roots - and making something contemporary for the modern world. The Middle East has so much to offer: years of architecture, food, colours, sumptuous fabrics and handmade embroideries are all an integral part of Mediterranean culture. Using fabrics that suit the European climate and beyond, I'm always trying to investigate how I can create something personal with a unique language - and also spread it to more and more people.