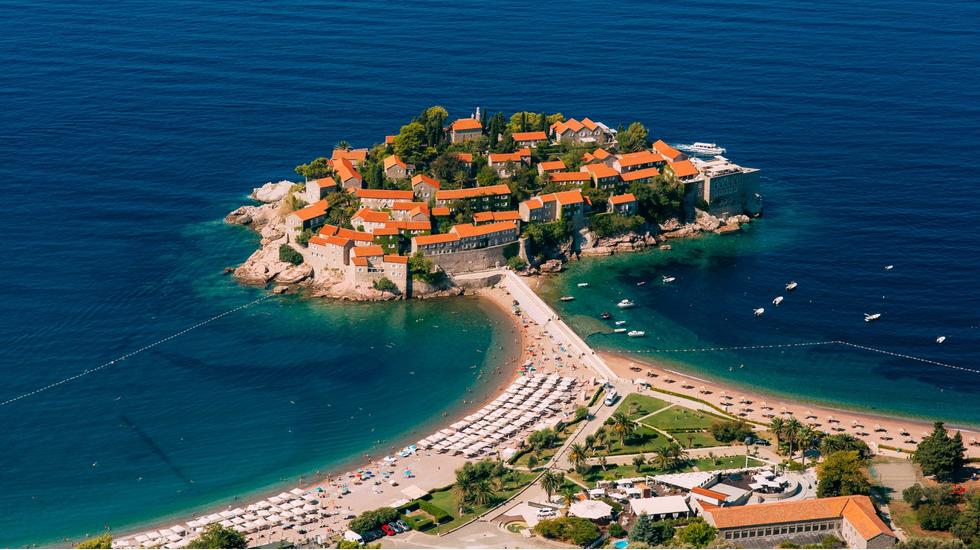 Lord Lord Byron described Montenegro as "the most beautiful meeting of land and sea on this planet" - and we can see where he's coming from. This tiny European country harbours gin-clear waters and white-blonde sand, yet surprisingly fewer sun-seekers than its Adriatic neighbours like Croatia. Gastronomy benefits from Italian, Greek and Balkan influences meaning food is creative and varied, while the coast is dotted with lively beach bars if you're looking for a good time. Active travellers will also be kept occupied by hiking trails, kayaking routes and water sports. In a nutshell, Montenegro ticks a lot of boxes - here's a snapshot of what to expect.

Despite its compact size, the topography of Montenegro is impressively diverse. In the northwest, you'll find the blinding turquoise waters of Lake Piva. Best explored by boat, cruise between the razor-sharp ravines, peer into Oteša Cave and cool off in Europe's largest reservoir. Quieter but just as attractive as its Croatian counterpart, the Blue Grotto is a refreshing day trip from the Herceg Novi marina. Not to be mistaken as just a summer fling, visit Montenegro in winter when the Durmitor National Park's peaks become a powder-white playground.

Balkan, Turkish, Austrian and Italian influences make for interesting gastronomy with a focus on locality and seasonality. Expect garlicky seafood and squid-ink risotto on the coast, while further inland the village of Njeguši makes prosciutto with a cult following - locals make the daily pilgrimage up the hair-raising Serpentine Road to purchase pounds of Njeguši prosciutto that have been dried and smoked for five months. If your palate sways to the sweet side, be sure to stop by Byblos in Porto Montenegro for fistfuls of their cashew baklava, rumoured to be the best in the country.

For now, sunburnt tourists are yet to sully Montenegro's pebbly shores. The glitterati will soon be washing up on the beaches of Budva - dubbed the "Montenegrin Miami" - due to its lively bars and dance-until-dawn beach clubs. Separated by a sweeping peninsula, we suggest moving along Budva's shoreline to Bečić. It's far enough from the main tourist drag to remain relatively low-key, but not so isolated that you'll pine for afternoon ice cream. Bordering Montenegro and Albania, freshwater Lake Skadar is als blissfully pretty with sandy shores and a handful of timeless villages.

An hour's walk from the modern city of Bar lies the thousand-year-old Byzantine city of Stari Bar. Following an earthquake in 1979, roofs are missing from many of the buildings, grand Ottoman bathhouses remain abandoned and the city's fortified walls lie in ruins, offering a fascinating snapshot of the past. Perched atop one of the highest peaks in Lovćen National Park and slightly off from the tourist trail are the remains of famed Montenegrin poet, philosopher and literary icon Petar II Petrović-Njegoš, preserved in a stone mausoleum. If that's not of interest, 360-degree views of Montenegro, Croatia and Albania will be. Our Lady of the Rocks, a church dating back to the 12th century and overlooking the Bay of Kotor is another notable monument.

Numerous art galleries, archaeological sites and museums are a reflection of the country's diversity. Visit the capital, capital harbours the Centre for Contemporary Art and is one of the most important cultural institutions in the country, housing collections from Africa, Asia, South America and Europe. You'll be hard pressed to find a more diverse collection this side of the Adriatic. In addition to flashy clubs and hedonistic open-air festivals, each summer Budva earns the nickname "Theatre City" for its impressive display of open-air theatre productions. Taking place throughout the Old Town, al fresco stages pop up in the Citadel, the Kosmač Fortress and a scattering of churches showing everything from Shakespeare to Montenegrin slapstick comedy. Be sure to set aside a day to explore the UNESCO-protected Old Town of Kotor.

With an average of 250 days of sun, Montenegro has idyllic sailing conditions. Sail from West from East passing by Herceg Novi, the Perast twin islands, Porto Montenegro and Kotor. Potter from craggy coves to the luxurious state-of-the-art marina in Porto Montenegro, via the pirate hideout of Ulcinj, where you'll find the hidden coves of Zanjic and Mirista.

Despite the crop of luxury hotels taking root in Kotor, Montenegro hasn't quite caught up with the likes of Italy, Spain and Portugal. We can't promise that this won't change with the country's surge in popularity and bid to become part of the EU, but for now it remains a purse-friendly summer alternative.

8. It's not on everyone's radar…yet

Former Ibiza-goers began visiting Montenegro when the White Isle started to become that bit too obvious for them. You'd be wise to go before the package holiday brigade gets wind.

Discover More
Once Upon a Sail in Montenegro
Read now