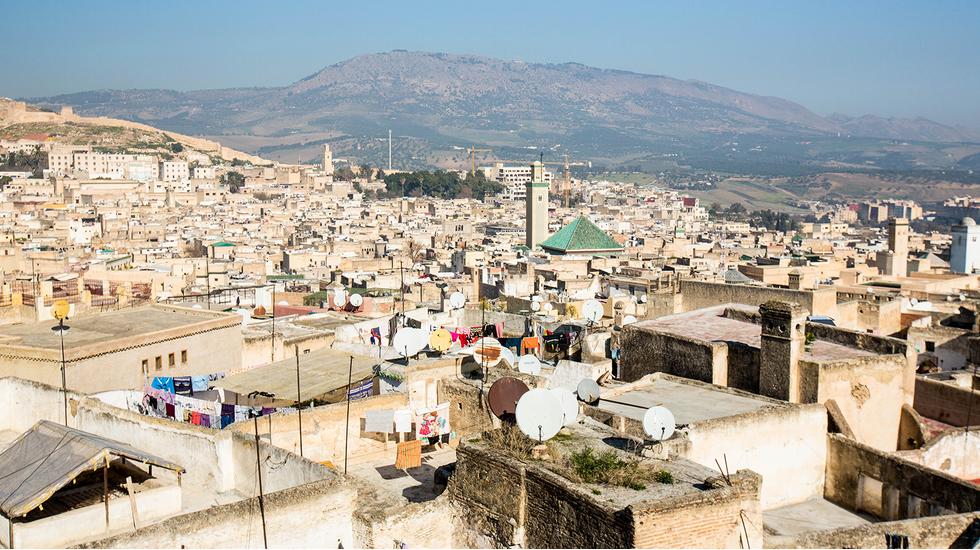 For For those acquainted with the intensity, richness and visceral nature of cities such as Marrakech, Kathmandu, Mumbai and Istanbul, Fez reveals itself to be both reassuringly familiar and refreshingly different. The ancient imperial city, once Morocco's capital, basks in the heritage of the great scholars, philosophers, astronomers, kings and merchants who had opulent palaces, mosques and madrasas - Islamic schools - built here in the 13th and 14th centuries.

The thronging medina, home to some 160,000 people, might be the world's largest car-free urban area, yet the cacophony of donkey hooves on cobbles, touting souk traders, strains of music and outbursts of laughter create their own special chaos. Don't be prepared to get lost in the maze of alleys, monumental gates, fragrant food stands and ornately carved doorways; intend to get lost. You'll be rewarded by stumbling upon intricately tiled fountains burbling in shaded courtyards, industrious backstreet coppersmiths, precariously stacked mountains of peaches, clementines and rose buds, and fly-dotted animal carcasses dangling outside butcher shops.

Press a sheaf of fresh mint close to your nose while touring the tanneries of Chouara - a mosaic of giant jewel-coloured inkwells into which animal pelts are dunked by bare-chested men seemingly immune to the overpowering stench. Recover your sense of smell by sipping tea in a leafy rooftop garden, with a sea of minarets below you. Climb to the ruins of the 14th-century Merenid Tombs at sunset as the medina's lights come alive and allow the haunting sound of the muezzins' call to prayer wash over you.

As with its sister city of Marrakech, Fez offers plush riads to which you can retreat after busy mornings haggling in the souks. There's also leafy gardens, awe-inspiring mosques and smart restaurants that deliver fine Moroccan dining.

If you've ever admired Marrakech's beautifully painted tiles - zellige - you'll be keen to know that Fez does them better. In fact, this is where the art form was born. What Fez doesn't do is the frenetic; it offers an altogether more relaxed pace of life, which suits us right down to the ground.