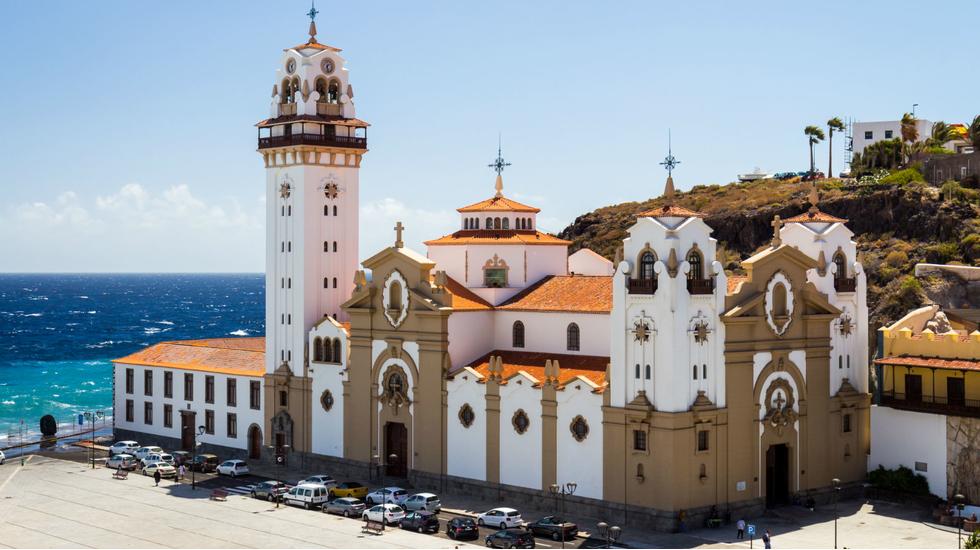 Tenerife Tenerife is a paradisiac island, tempting at any time of the year but especially during the cold winter months when the mild weather feels particularly luxurious. The temperature generally sits above 20 degrees and the varied tropical landscape yields rewarding secrets beneath the eternal sunshine. Relax in a chic beach resort, explore the diverse terrain, surf at black-sand beaches, descend vertigo-inducing gorges, eat fresh fish - there are 785 square miles in which to create your adventure. Here's everything you need to know before you go.

Tenerife's two main cities are the capital of Santa Cruz and the former capital La Laguna. While they're less than an hour drive apart, the landscape is dramatically different; the south is desert-like and dry, while the north is very tropical and green. 80% of visitors flock to the south, where endless golden sandy beaches await and sun is guaranteed, but the north offers a wilder experience, with black volcanic-sand beaches, many of which are only accessible on foot. Take your pick.

Mount Teide, a volcano that last erupted in 1909, is the highest peak in Spain and the third largest volcanic structure in the world. At 3718m, you need to apply in advance for a free permit to hike to the summit, but the lower side of the volcano is accessible or there's a cable car to take you to the Rambleta station, less than 660 feet from the summit. On a clear day, you can see up to four other islands from there; Gran Canaria, La Palma, El Hierro and La Gomera. Declared a National Park in 1954, the volcano and the surrounding area were also made a UNESCO World Heritage site in 2007. Hike the dozens of trails through the arid, desert-like landscape where unforgiving environmental conditions mean 12 endemic species unique to the island, such as gorgeous alhelí flowers, flourish here. The fairy forest of Anaga Mountains is another area worth carrying hiking boots for, as well as for descending the Masca gorge for a unique view of the cliffs of Los Gigantes.

Visit the guachinches for cheap eats

Traditionally located in the north of the island, guachinches are makeshift restaurants born out of the necessity of wine producers to sell their produce. Pitch up to give the house wine a try and enjoy some homemade food, made by the woman and offered in small portions as tapas to complement the booze. Plates may include the likes of chickpeas (garbanzos), rabbit (conejo en salmorejo), goat's meat (carne cabra) or spiced pork (carne de fiesta) to name but a few. Guachinches are usually small and simple, often in converted garages, making them great places to discover the local soul of Tenerife. Download Guachapp to track down the best ones - or if you trust your instinct, look out for signs like "guachinche" or "se vende vino" (wine is sold here).

Soak up the local culture in La Laguna

La Laguna is a colonial town founded in the late 15th century and one of the island's main cultural hubs. Included in the UNESCO list of World Heritage sites since 1999, La Laguna is an elegant, colourful and predominantly low-rise town where the university is located. The main streets are pedestrianised which makes it easier to explore historic buildings such as the San Miguel chapel, the cathedral, the convent of Santa Catalina de la Siena and the Nava Palace. Interestingly, the city planning of La Laguna laid the foundations for many Latin America colonial cities which were modelled on it.

Tenerife is fast becoming a wine destination and rightly so - the island prides itself on having five PDO-recognised wine production areas thanks to fertile volcanic soil. The first area to have achieved protected status was Tacoronte Acentejo and today it boasts the largest numbers of vineyards in the whole archipelago. We recommend a trip to La Casa del Vino in the pretty village of El Sauzal, where you can learn about winemaking traditions in Tenerife while enjoying one of the best views of Mount Teide. Another good option is Bodega Monje, a family-run winery in business since 1750 which offers guided tours.

The Canary Islands are also known as the "Fortunate Islands". One of the reasons might be the 3,500 hours of sunshine per year or the average temperature of 23 degrees. This, together with the unique diversity means that anything is possible - you don't need to check the forecast to make plans and there are a wealth of activities on offer. Hike Spain's highest peak in the morning, then cool off with a swim and lunch at a seafront restaurant before working it off with an adrenaline-filled afternoon of kitesurfing.

Get stuck into local food

The past few years have seen a resurgence in Tenerife's cuisine with more and more restaurants in turning their back on tourist-catered food offerings in favour of traditional regional cuisine. When browsing menus look out for local vieja or cherne fish, spicy 'mojo picón' or 'mojo verde' sauce and 'papas negras arrugadas' (wrinkled black potatoes). For desserts, opt for sweetly spiced rice pudding-like frangollo or gofio mousse made with local flour.

In terms of local produce, bananas are the quintessential fruit of the island - indeed, we've never tried better, while fresh avocados and papaya are equally gorgeous. Head to the farmers' market in Tegueste to pick up some supplies for a picnic on the beach.

In Tenerife you will see that there is at least one car parked in front of each house. Everyone has a car and it is for a good reason: public transport outside the main cities isn't very convenient, so unless you are planning to not move from your hotel, renting a car is highly advisable.

Sunsets are an event

The burning sky with the defiant Mount Teide below and the Atlantic Ocean stretching as far as the eye can see is postcard perfection. Some of the best spots for chasing sunsets are around the volcano, as well as at beaches such as Benijo in the Anaga area. Las Terrazas del Sauzal is a great spot to get stuck into some sundowner cocktails.

Know your barraquito from your leche y leche

When ordering coffee in Tenerife you're likely to come across some unknown brews. Be sure to sample the two local specialities: barraquito and leche y leche. The barraquito is a gloriously layered concoction of milk, coffee, condensed milk, ground cinnamon, lemon peel and Licor 43 or Tía María (so damn delicious), while the leche y leche is coffee with milk and condensed milk. Unsurprisingly, both are on the sweet side, so think twice before reaching for the sugar.

Gaze up at the sky

Tenerife has been home to the Canarian Institute of Astrophysics for over 40 years and, together with places like Hawaii, it's known as one of the world's best locations for stargazing. The pitch-black Canarian sky has been protected by law since 1992 and guided tours of the Teide Observatory are available for astral aficionados.

Europe's largest lava cave is located in the district of Icod de los Vinos, a town famous for the "Drago Milenario", an ancient dragon tree rumoured to be between 1,000 and 3,000 years old. La Cueva del Viento meaning "cave of the wind" is an underground labyrinth of over 10 miles of passages with many yet to be discovered. Guided visits are available and tickets can be bought online.