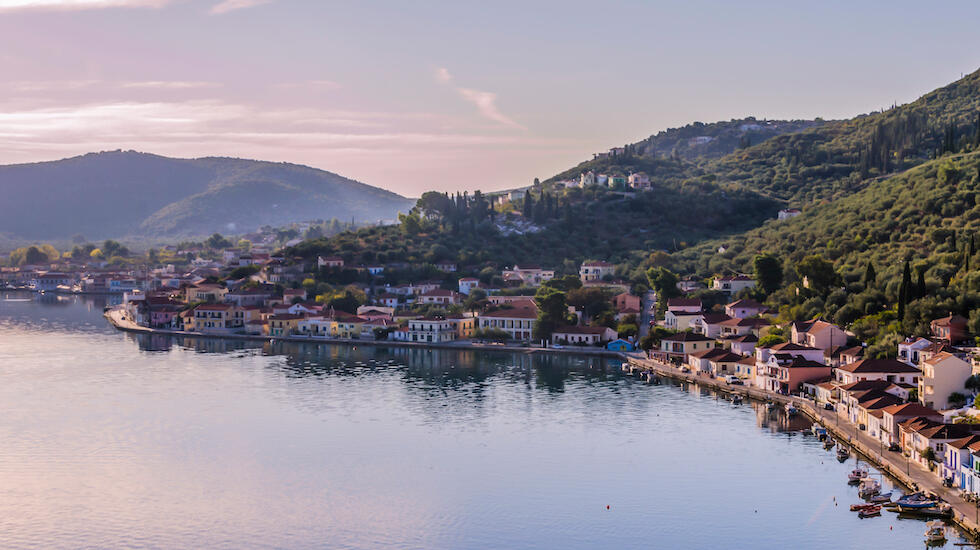 We've We've danced 'til dawn on hedonistic Mykonos, explored Crete's crumbling ruins and swooned at Santorini's whitewashed beauty. Now, it's time to venture further afield and explore the lesser-known Greek isles. With over 6,000 in the Hellenic archipelago, picking a base camp for your holiday can feel a little mind-boggling. No fear: whether you're in search of white-sand beach retreats, romantic honeymoon holidays or hiker-friendly hillsides (with a vineyard at the end of the trail), we've pulled together eight of our favourite lesser-known islands to explore.

Eight lesser-known Greek islands that are worth the boat trip

Spend your days wandering small, sherbet-coloured alleys, investigating the cool interiors of myriad local churches and sipping the excellent local wine on a trip to Symi. Once known for its ship-building industry, the warm-hued harbour capital holds the same moniker as the island, and tumbles down a natural amphitheatre of hills towards a picturesque waterfront that's perfect for dusk dining. You'll notice the muddle of pastel-hued homes are distinctively un-Hellenic in looks; Symi's golden era arrived in the 19th century, when neoclassical, Venetian-inspired architecture was all the range. Bring walking shoes - there are barely any cars, but hiking routes aplenty.

Where to stay: The Old Markets

With over 70 beaches, each enclosed by rugged cliffs and the Aegean's Gatorade-hued waves, Milos is a sun-seeker's paradise - but that's not all the island has to offer. Just a short walk beyond the beaches lie ancient catacombs, castles, amphitheatre ruins and the iconic Papafragas' aquamarine swimming hole (look it up, you'll want to go). Meander through the island's labyrinthine capital, Plaka, or head north-east to Pollonia, for harbour-side restaurants and wineries.

Where to stay: Skinopi Lodge

While many have heard of Ithaca, few have made the trip. Known as the homeland of Homer's Odysseus, this myth-swirled island does not disappoint. You're unlikely to find any cyclops, lotus eaters or witches turning men into swines, but a trip around its coastal curves will lead to encounters with seductive emerald coves, ancient castle ruins, and 16th-century church frescoes. We know which we'd rather meet.

Where to stay: Levendís Estate

Only a couple of hours flight from Athens (or an hour on the ferry from Piraeus, the capital's main port) Hydra has long been a haven for the art crowd. Home to the School of Fine Arts, this car-free island offers rugged cliffs, stone-grey mansions, wandering donkeys and steep steps that lead up into isolated, quaint towns clinging to steep hillsides. There are no large-scale hotels; only small, bohemian stays and cute cafés inviting you in for a glass of perfectly chilled rosé.

Where to stay: Cotommatae Hotel

This pine-scented isle in the Attica region of Greece was the first Hellenic outpost to raise a revolution flag in 1821, declaring independence from the Ottoman Empire. Today, despite a sleepy countenance, the tranquil isle retains a strong identity. Residents are reluctant to be grouped with their neighbouring Saronic islands, preferring to embrace a solitary life adrift in the Aegean. They're also proud of their fiery history: cannons ring the Old Harbour of the largest town, Dapia, and the legacy of a revolutionary widow, Laskarina Bouboulina, who left her whitewashed mansion to lead a naval fleet to victory, is a source of immense island pride. Catch up on the history at the Bouboulina Museum, then circumnavigate the island in search of its myriad pebbled coves - visitors are banned from bring cars, so you'll need to hire a bike.

Where to stay: Poseidonion Grand Hotel

This sleepy island has no flashy hotels, barely any shops and minimal nightlife. Away from the hedonistic crowds of its neighbour, Mykonos, Serifos' dramatic landscapes and sweeping solitude are an estoric sun-trap, providing escapism and seclusion (no White Isle antics, please). The best beaches are accessible only by dirt roads and boats, but their calibre is worth the added effort. Hungry? Head to the quiet, taverna-lined harbour in Livadi for piled-high platters of seafood and carafes of crisp local wine.

Where to stay: Faros Guest House

Tiny Tinos boasts more than 50 villages dotted between thyme-scented hillsides and sprawling vineyards. Most are a model of Cycladic minimalism, complete with whitewashed cuboid homes, tavernas outfitted with blue-legged tables and the island's much-loved windmills. You'll notice lots of white marble around; famed Greek sculptures including Gyzis, Lytras, Chalepas and Sochos have all called Tinos home. Take up a chisel yourself at the Dellatolas Marble Sculpture School.

Where to stay: Villa Ghita

Andros' ancient name, Hydroussa, is a perfect encapsulation of its geography. The word means 'watery', a nod to the four rivers that burble up between the island's lush hills as springs, streams and waterfalls. Differing from the rocky crags and dry winds of its Cycladic neighbours, Andros is a verdant isle. The best way to explore? On foot. Cross ancient stone bridges, and meandering along old goat-trod paths, passing the cool cloisters of the island's many monasteries, as you find your way to the low-key villages fridging the island shores.

Where to stay: Onar