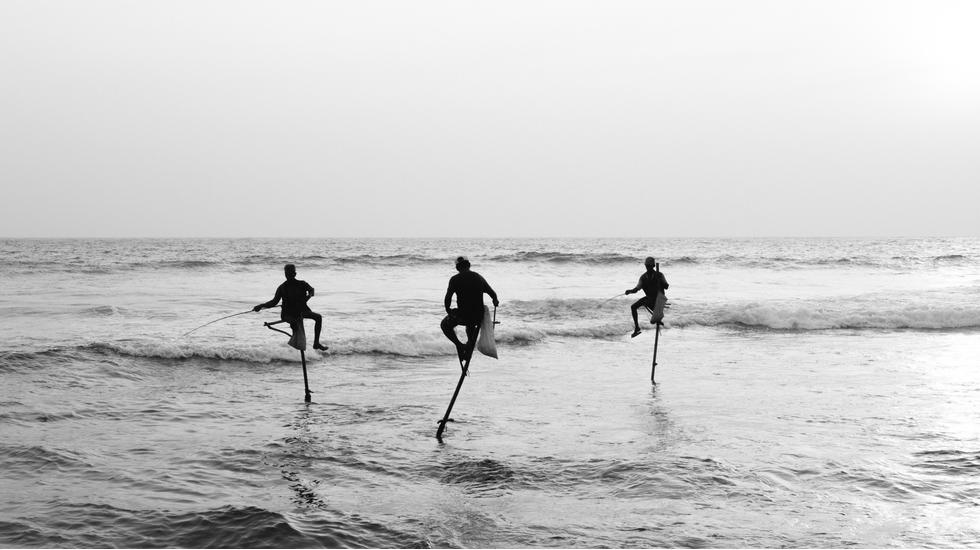 While While attempting to photograph early morning rush hour in Galle bus station, a chance encounter led me to an extraordinary group of people living a disappearing way of life in Sri Lanka. Curiosity about my camera from a man en route to his remote fishing village began a conversation that took me on a very different journey than expected.

At this village on the east side of Galle Fort, I saw traditional oruwa boats returning from a night at sea with fishermen unloading catches of tilapia, tuna and mackerel ready for delivery to a local market. At Hambegamuwa Wewa Lake, I met men herding fish into their nets by banging the side of their boat, and up the coast from Dalawella Beach I found stilt fishermen perched on their poles in the surf. This practice, often considered ancient, probably started after World War II due to intense competition for limited fish stocks which forced the men onto poles in search of small reef fish.

The tsunami in 2004 swept away many of the poles and decimated fishing communities along the coast. Nearly everyone I met had lost someone close to them and all had struggled to re-establish their livelihoods and survive. Today, a rapidly growing tourism industry has provided new income opportunities; lake fishermen subsidise their catches with tourist boat tours, while the stilt fishermen pose for photographs for paying tourists.

You have to travel away from popular tourist destinations to find the genuine fishermen using poles that have been passed down from father to son. I could have spent months photographing these extraordinary people with their weathered faces and slight bodies, whether at work or relaxing, often completely at odds with the noise and chaos of their process. They welcomed me, embraced the photographic process and spent time explaining - using a combination of sign language and fractured English - their lives in these vibrant and beautiful communities.