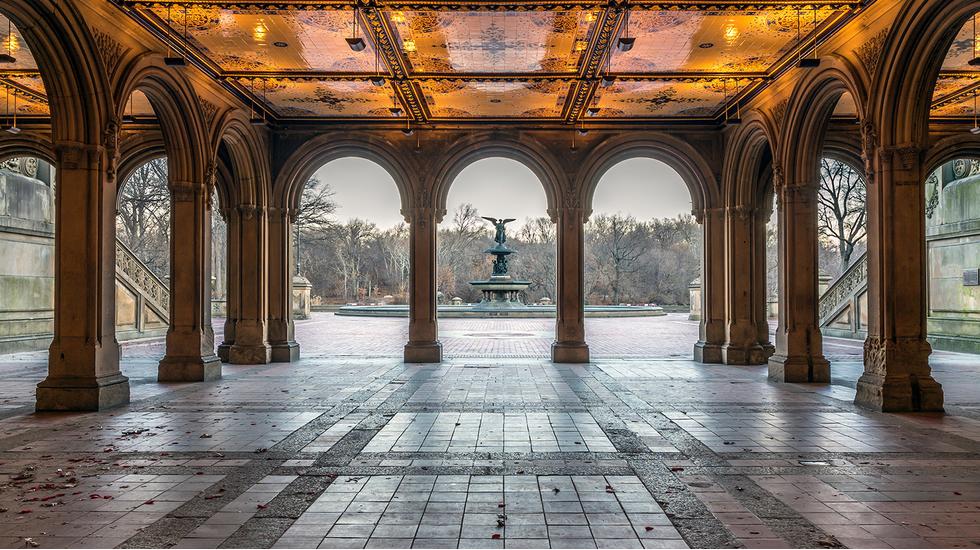 With With an impressive back catalogue, New York knows how to set a romantic scene. Take the plunge and go fully-fledged love tourist for a tongue-in-cheek Valentine's Day because, quite honestly, the whole thing is pretty ghastly anyway.

"Nothing has happened to me yet. That's why I'm going to New York!" Sally utters to Harry as they commence their road trip. New York plays a blinder in this Nora Ephron classic, so if Washington Square Park (where it all begins) is too obvious a destination, perhaps the film's restaurant offering will pique your interest. Head to Café Luxembourg on the Upper West Side, where Harry and Sally try to set each other up with their best friends. Sally ordered grilled radicchio but we'd recommend the swordfish at this relaxed neighbourhood spot. Alternatively, head to Katz's Deli for "whatever she's having". At Katz's, Harry and Sally debate whether women fake orgasms - and Sally promptly proves that they do by faking one in the middle of a crowded bistro. At this 125-year-old deli the line in (to order) and out (to pay) are both snaking, especially at the weekends, so it's best to expedite your lunch by sitting at a served table.

Bloomingdale's, the home of the meet-cute, where Jonathan Trager (John Cusack) and Sara Thomas (Kate Beckinsale) meet while shopping for glove. Despite being there to buy last-minute gifts for their respective lovers, the scene swiftly turns to romance. Cut to the eponymous Serendipity III, a popular restaurant in the Upper East Side known for its trademark frozen hot chocolate - Sara's favourite place in the city for a sweet treat. While most Manhattanites above the age of 11 would probably rather go without than grab dessert here, the novelty factor is undeniable - it may be predictable but it's also delicious. Douse yourself in the overt cliche that is a walk in Central Park and follow the walkway leading to the gilded Bethesda Terrace for a sneaky canoodle.

If there's one thing you take away from You've Got Mail (aside from the promising power of adult pen pals) it's their throve of top-notch food spots. Among other businesses patronised by both Kathleen (Meg Ryan) and Joe (Tom Hanks) is legendary West Side deli Zabar's. When Kathleen finds herself in the cash-only line Joe swoops into the rescue (chivalry is alive and kicking). Later across town, Kathleen waits for NY152 (Joe's mailbox name) at Cafe Lalo. And waits and waits. Joe Fox shows up and orders a "mochaccino decaf, non-fat" (you can order the same) and waits a while with an unknowing Kathleen. Cafe Lalo main draw is the display cases bulging with an assortment of cakes, cookies and pies, but despite its distinctly American desserts it's the coffee shop's attempt at European suave - think art-nouveau posters and French windows - that give it its romantic flair. Not a coffee fan (and so presumably not a New Yorker) grab a hot dog at NYC mainstay Gray's Papaya a la Kathleen and Joe. If you're a cheap date, perhaps you'll even be impressed by a $1.25 meal - regardless, these dogs are some of the tastiest in the city.

"He adored New York City, he idolised it out of all proportion… New York was his town, and it always would be." The opening line in Manhattan reminisces on the New York of Woody Allen's childhood. Follow suit and start things off with a trip to Sutton Place Park to look out at Queensboro Bridge just like Isaac and Mary. After a suitable amount of gawping, head to the Boating Lake at Central Park. Go to Bethesda Fountain (yes, again) and head north to retraces Woody's cinematic steps. After a morning of ambling through parkland, head back to Zabar's for smoked fish, bagels and knishes.

Debonair types will relish the swanky surroundings of the 21 Club members' bar. Pass its distinctive jockey-topped railings and stop off for olive-garnished drinks in an ode to Michelle Pfeiffer. Her character, Melanie Parker, has cocktails in the lounge here before skipping out to take her child to a soccer game (George Clooney in tow). For something a little more budget-friendly (if touristy as anything) make tracks for Pier 83 and hop aboard the Circle Line Ferry. Camera-weilding crowds aside, there's something comfortingly retro about this date suggestion. Once you've docked, head for the Highline (only completed in 2014 and therefore not in the film) and amble down to the Meat Packing District to re-ground yourself in 2019.