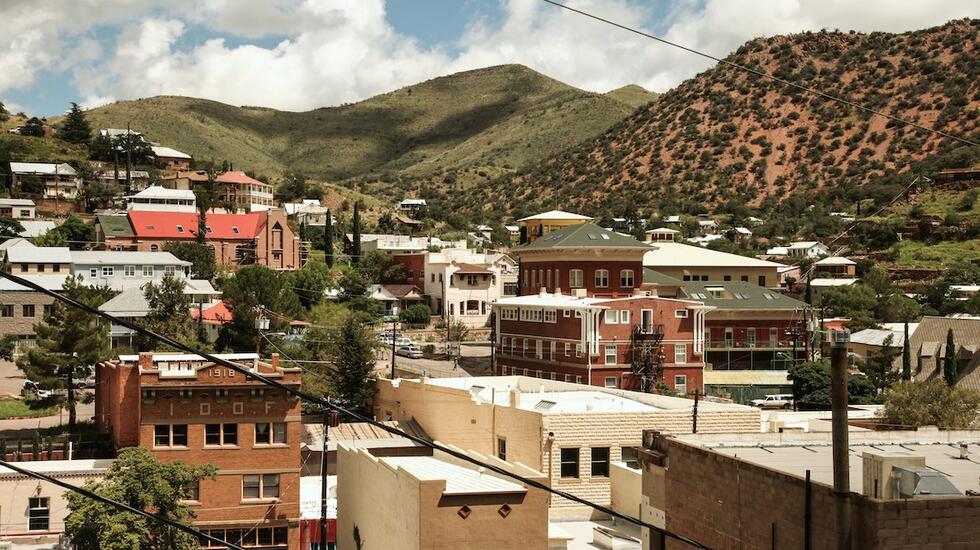 Thought Thought that Arizona was all about trekking through the Grand Canyon and rubbing shoulders with cowboys in Phoenix? Think again. We've ventured beyond Flagstaff, Monument Valley, Tucson and co to find the underrated places of jaw-dropping, red-rocked natural beauty, indigenous culture and, erm, utopian urban experimentation.

Why we can't wait to visit again: Jutting from Arizona's red rocks and bruised valleys, this geometrical patchwork of sci-fi-esque concrete structures is the brainchild of Italian architect Paolo Soleri. A former student of Frank Lloyd Wright, he founded this experimental micro-city in the 70s in a bid to reimagine urban sprawl, excessive consumption and ecological disconnect.

Life here revolves around access to nature, frugality and the local production of food and energy - oh, and a bronze foundry, where bare-chested men mould molten metal into the famed Soleri bells. From here, follow State Route 69 to Watson Lake, where mirror-still waters are broken by exposed bedrock.

Where we're staying: Arcosanti offers rooms, dorms and campsites to guests who want free exploration of the settlement, a chance to connect with its 80 permanent residents and nightly views of the Milky Way. The two-bedroom Sky Suite is the stuff of interior-design dreams.

Before you go: There are several documentaries on Paolo Soleri and his utopian city. Ten years in the making, The Vision of Paolo Soleri: Prophet in the Desert explores his legacy as an architect, environmentalist and philosopher while posing questions about mankind's future.

Why we can't wait to visit again: The tourist trail in northern Arizona usually stops short, in Flagstaff, with adventures further north often limited to the silver-screen-famous Monument Valley. To stick to this path is to miss Canyon de Chelly, one of the longest-inhabited landscapes in North America.

This flora-flecked slice of the red-stone Navajo Reservation is home to Spider Rock and the White House Ruin Trail. Note that access to the canyon floor is restricted; you'll need to be accompanied by a park ranger or authorised Navajo guide. Like this? Take the Indian Route 59 to the Betatakin ruins, a housing complex built into the alcove of a cliff by the Anasazi at a time when only mud bricks and hand tools were available.

Where we're staying: Off the beaten path, in this traditional Navajo hogan.

Why we can't wait to visit again: Around 145km south-east of Tucson, nestled among the Mule Mountains, near the Mexican border, Bisbee is a place where past and present collide. Though the former mining enclave is ranked among America's best historical small towns, it's filled with a free-spirited community and a thriving arts and culture scene.

Peruse galleries, vintage stores or the Saturday farmers' market, climb the town's many staircases or catch a gig as you sip a barrel-aged brew at the Old Bisbee Brewing Company. From here, take a half-hour drive north to Tombstone to relive old Western movies. It's best known as the site of the gunfight at the O.K. Corral.

Where we're staying: The Shady Dell, which began life as a camping ground in the 1920s, and today houses a collection of vintage trailers that double up as guest rooms, with diner-style breakfast booths and vintage radios.

Before you go: Read David Ryan's The Bisbee Stairs to get acquainted with the town's trails, stairways and hidden corners, or watch Bisbee '17, a 2018 docu-film that reflects on the illegal kidnapping of striking miners.

Why we can't wait to visit again: Arizona is the astrotourism capital of the US. Flagstaff (where Pluto was discovered) was the world's first designated Dark Sky destination, but we like to venture south into the less-crowded Verde Valley, which is also known for stargazing ops, as well as wineries, canyons and the rustic towns of Camp Verde, Cottonwood, Jerome and Sedona.

Almost 80 per cent of the valley is designated national forest, making it ideal if you want a change of pace from Arizona's signature red-rock landscape. We recommend visiting the culture-rich reservation of the Yavapai-Apache Nation, which is dotted with prehistoric sites and scored with early irrigation systems that fed the tribes' farmlands. Carved into a sheer limestone cliff, the 12th-century Montezuma Castle is awe-inspiring.

Before you go: Visit here and you'll be gazing at stars - lots of them. Pick up The Art of Urban Astronomy by Abigail Beall for an accessible guide to the night sky that you can also use back home. You'll want to pack a decent pair of binoculars, too.

Why we can't wait to visit again: Letting the wind tousle your hair as you kick up dust on Mother Road is a great antidote to months spent cooped up. Sure, Route 66 - which originally ran from Chicago to Los Angeles - is hardly a "lesser-known" destination, but hear us out.

Along Arizona's 250km neon-lit stretch - the longest unbroken section still in existence - most travellers make a beeline for popular stops such as the Petrified Forest National Park, Flagstaff, Kingman and the Grand Canyon. Instead, try Holbrook, Winslow and the restored gas station Cool Springs, after which the road bends 122 times in 15km. Just before the Californian border is Lake Havasu City, where you'll see London Bridge and white-sand beaches.

Where we're staying: Winslow's vast La Posada is the fantastical vision of architect Mary Colter, who, in 1929, set about recreating a 19th-century-style Spanish rancho, complete with a faux archaeological site and hotel. Former guests include Franklin D. Roosevelt, Einstein and Amelia Earhart.

Before you go: Immortalised in popular culture, Route 66 crops up in Get Your Kicks on Route 66, popularised by Nat King Cole, and served as a symbol of escape and loss in John Steinbeck's The Grapes of Wrath.