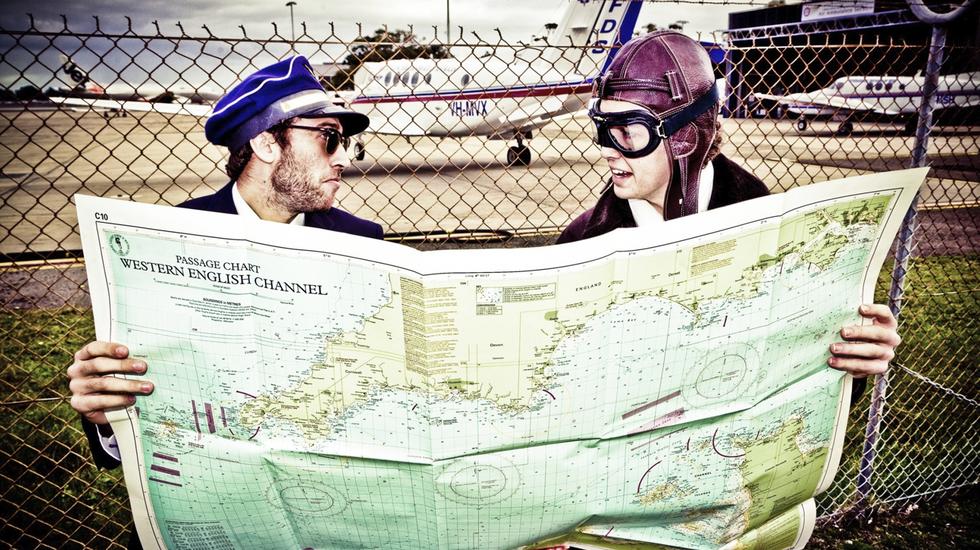 Hilarious Hilarious Aussie duo Flight Facilities are most famous for the seductively chic and undeniably catchy house track 'Crave You' from 2010 and have finally released their new debut album, 'Down to Earth'. The long awaited album is a perfect balance of Balearic house vibes infused with funkier tracks. With features from Australian queen of pop Kylie Minogue as well as Bishop Nehru, Reggie Watts and Emma Louise, it's an absolute must-have. It was only natural therefore that SUITCASE Magazine should check in with the co-pilots.

SUITCASE Magazine: Has the choice to make your new album, 'Down to Earth' been a natural progression from previous material or can listeners expect something a bit different?

Hugo: I think it's along the same band as the stuff we've always done, we try to attack the same pockets of music we've always been interested in but it's allowed us to do things that aren't necessarily designated pop songs which is what we've done in the past. Now we've done instrumentals that show a broader range of our taste.

SM: Is there a strong community within the electronic music industry or does it get quite competitive?

H: There is, but it depends on where you live. We're Australians so it's much more shut out. But there's a strong community in Australia definitely.

Jimmy: We've made a lot of friends here in Europe and in America as well, so there's a strong sense of community but everyone has to lose their egos, leave them at the door and then you can collaborate and do great things together.

H: So it's not competition, sometimes I think it's envy for the success of a more commercial side of it.

SM: Which genre do you hate?

H: And EDM's a bit boring, it's the same formula.

J: But if you were in the middle of EDM and you were the dude that was commanding 40,000 people...

H: Ah yeah, it'd be a high but all the people that are sitting there watching it in the crowd, I don't know how they go, "this is so different to that last song" (laughs).

H: And then you've gotta pick a word with three syllables...

J: I think four syllables is my thing.

H: I heard one the other day, well about six months ago now, and the phrase was 'Big Foot', it was like "ch ch ch ch ch... Big Foot" I was like, how lazy is this getting.

H: We don't hate it we just think it's really unimaginative.

SM: Who have you taken inspiration from that would surprise us?

J: Katy Perry. (laughs) OK, so I haunted Hugo's dreams. The first tour we ever did here I would sing Teenage Dream...the main great bit, I still really love that song it's a great pop song. I sung it to him and he was haunted by it. Then we got home and I downloaded that song, renamed it and sent it to him on iChat and I was like, "Dude have you heard this new remix", and he opened it and was like "Fuck you, but I've got this new thing for you to hear" and sent me back the trash can noise. So basically yeah, Katy Perry is a big one.

H: I think classical music, maybe that wouldn't surprise you as Clair De Lune was based on it. We've referenced people like Calvin Harris for bits here and there but before - God I'm going to sound like such a wanker - before he got so 'commercial'(in a wanker voice). He was already commercial then, he's got really great song structure.

SM: If you could record in one country using all local musicians where would you go?

H: Can you traipse through the past, even dead people? Then you've got the Beatles at hand, and you can be like "Oi, Paul. Write us a song real quick".

H: And then America's got like Elvis or Roy Orbison.

SM: What other Australian artists are killing it at the moment?

H: You know Chet's doing well when you have breakfast in Germany and you hear his song four times.

J: Sia! All credit to her, she's amazing

SM: What myths about Australians would you like to dispel?

H: I can just give you ones that are true.

J: We're retarded and we're loud... Our alcoholism is completely true, it's more than you think.

H: We say prawn, not shrimp and we don't put them on the barbecue.

SM: If you could choose one person from history to sit next to on a long haul flight who would it be?

H: I'd say Steven Fry. I really like language and he would teach me unnecessary words, I'd be a pompous dick about it for the next week.

SM: What do pack in your SUITCASE?

J: I've got this thing from a Japanese shop in Berlin, these incredible tiny little space saver things. One side has all your shirts, one side has your pants, and there's other smaller ones with undies and socks, they have revolutionised my packing experience. It's really, really good.

H: Sectional organisers (creepy voice). One thing I do have in my toiletries kit is a thing for my ears to flush them out because sometimes the plane dries out and blocks them and in music you can't really afford to have that.