​This article was originally published in Volume 9 of SUITCASE Magazine. 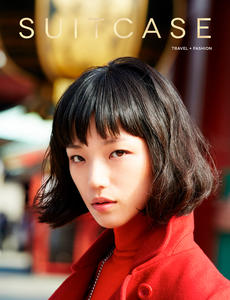 For For years, top London restaurants have been dominated by men. But Florence Knight is swelling the ranks of a new generation of women, who have turned up the heat in the kitchen - and proved that they're worth their salt. Florence first showed up on the culinary radar in 2010, after being asked by restaurateurs Russell Norman and her now-husband Richard Beatty to run their latest venture, Polpetto. The 25-year-old rising star had been working as a pastry chef at Raymond Blanc's The Diamond Club under the instruction of French master baker Richard Bertinet - but was still relatively unknown. Rather than crumbling under the pressure, she ignored her brief, which was to create a miniature version of Norman's Polpo serving meatballs, pizza and fried courgette. Instead, she steered her own path, and in doing so has revolutionised the London dining scene.

Meeting Florence at her new Soho-based restaurant, you have to admit that she's not what you'd expect. The image of a typically haggard and weary-eyed head chef has been replaced by a glamorous young woman, who - despite having just completed a hectic lunch order - is immaculate in her white chef's coat, with her hair tied neatly back. She instantly comes across as someone with plenty of dedication, determination and drive. 'Food-wise, it was slightly daunting to reopen Polpetto, but it was also nice to wipe the slate clean and start afresh with totally new dishes. I knew I wanted to take it a step further and I think it's a lot more grown up,' she says confidently.

After joining Polpetto, Florence spent time travelling back and forth between Venice and London for research purposes. She fell in love with the city's fish markets, fresh produce and local bacari (wine bars) that serve simple, small dishes in unpretentious and welcoming settings. In spite of her French classical training, it was here that she mastered the art of baccalà mantecato (a Venetian staple of creamed salt cod) and began channeling her own inspiration for Polpetto. Looking around the restaurant, it is clear that her vision has become a reality. Larger than its former home above the French House on Dean Street - seating 60 as opposed to 24 - the long and narrow room retains an intimate and understated feel, with rustic and unfussy details making it seem as though it has been around for much longer than it actually has. Although Venetian inspired, Florence insists that her food is, first and foremost, about seasonality. 'It can be a bit confusing because my food isn't 100 per cent Venetian. I go no further than Europe so it's basically Italian with some French and British produce thrown in,' she says. To ensure its freshness and quality, she will often source produce closer to home and has a close working relationship with her many suppliers.

I always loved the lunchtimes when the table was filled with different cheese, ham, charcuterie and a soup mum had made; rather like rustic Italian food

Florence describes her food as traditional but always with 'an element of surprise'. For instance, the chef has previously experimented with burning oranges, served candied fennel and created a unique rhubarb dessert using a shortbread base rather than classic stewed rhubarb. 'It's about having a bit of humour with food rather than taking it too seriously. I like pushing the boundaries while staying traditional in order for the flavour combinations to work.' Being a seasonal chef, Florence is at the mercy of the elements, which can often prove daunting. But, being naturally instinctive and versatile, she has learnt to roll with the punches. She says: 'It's always a challenge because you're constantly chasing things, but you just have to think of new ways to approach a dish.'

Florence studied art, textiles and home economics at the London College of Fashion, and although passionate about food, it wasn't until the unexpected death of her father that she changed course to pursue cooking at the tender age of 19. 'I started from the bottom washing plates, and it was then that I realised I wanted to cook,' she explains, smiling. 'I don't think it matters who you are; I think if you love it, you'll do it, no matter how gruelling.' To this day, Florence says her artistic skills have helped her enormously: 'I learn very visually so it was quite easy for me to pick up. I still sew and it's a great technique to have because when I make a dish, I'm constantly thinking about all the different components.' Like many creative people, she can often get caught up in her own world and has to force herself to leave her comfort zone. She says: 'When I travel I become much more creative because it gives me headspace. I recently came back from Greece where I saw quinces, which really spurred my imagination.'

The 29-year-old finds the fast-paced and relentless world of Soho fits her and her husband's lifestyle perfectly: 'It's an incredibly exciting place to live and it enables me to squeeze in those little extra moments in the city.' They love going out to eat and Florence has a checklist of new restaurants she likes to cross off. However, she continues to favour local haunts, such as Koya and Vasco & Piero. Despite offering different types of cuisine, these establishments share one thing in common: 'They've all got good food and not much fuss,' says Florence. 'I think there's a time and a place for a Michelin star but it's not something I do daily.' When asked whether another cookbook is on the horizon, Florence jokes that being on a quest for a new sous-chef has forced her to shelve the idea for now. But whatever it is that Florence picks as her next challenge, I'm sure she will meet it riding at full tilt.