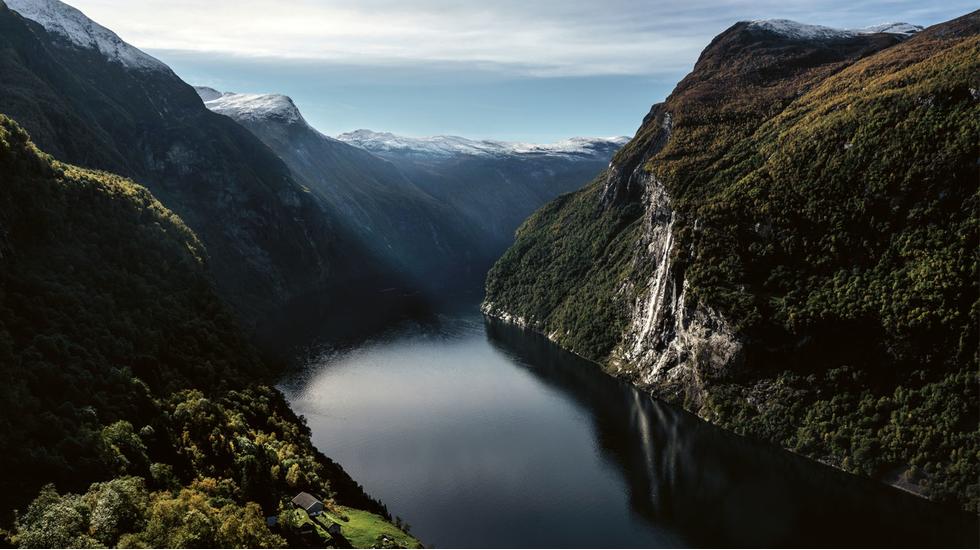 "Fairytales are a way of explaining the world around you," says Jonas, as we trudge up the heathery hillside of Dovrefjell National Park. "So if children ask why the mountains are shaped in such a way, you can blame it on the trolls." It is mid-morning in the first week of October, and the sun is just beginning to stretch its legs following a minus ten-degree start. Scrambling through craggy rocks covered in lime-green lichen, and with the added possibility of bumping into a muskox (the modern-day answer to the prehistoric woolly mammoth), it is certainly a landscape that requires some explanation.

This is the beginning of my journey around western Norway with Jonas Bendiksen, a Norwegian Magnum photographer who has been commissioned by Land Rover to document some of the country's most remarkable vistas. With dense, evergreen forests, towering snow-capped peaks and deep-blue fjords, the landscapes of Norway look as though they've been torn out of the pages of an illustrated children's book.

But Jonas is hoping to capture something other than the country's beauty. Making use of the off-road expertise of a Range Rover Autobiography, he wants to reflect the scale of the panoramas we pass, as well as the integrated relationship that he has with nature. Much of his life's work has engaged with the theme of human isolation, and this feeds his desire to document terrain that is both rugged and remote. Jonas says: "For me, photography isn't just about capturing images; it's an excuse to be interacting with the elements - to have purpose."

Our starting point is Dovrefjell, a mountainous region associated with Nordic folklore and romanticised versions of national identity. The poetry of Henrik Ibsen and the music of composer Edvard Grieg celebrate the mystic qualities of this land, and the founding fathers of the Norwegian constitution agreed in 1814 to remain under oath "until the fall of Dovre".

The land is also home to Europe's last wild reindeer herds, and the Norwegian Wild Reindeer Pavilion has been built to observe them. This lookout point lies at the end of trail I am walking along with Jonas. A rectangular cabin, its rippled timber exterior echoes the curves of the surrounding alpine peaks. Inside there are tiered timber benches opposite a glass-panelled wall through which a panorama of the Dovre Mountains floods in.

The range's tallest peak is named Snøhetta - meaning "snow-capped" in Norwegian - a translation that seems especially relevant today, just after the first snow of winter has fallen. (Snøhetta is also the name of the architectural firm that designed the lookout as well as Oslo's iconic Opera House.) I take a seat and warm up by a floating, wood-burning fireplace, while Jonas rounds the structure on the outside and turns his lens to the glass wall itself, using it as a mirror to project the landscape back towards him.

That afternoon, we carve through alpine valleys, the scenery rushing past the window in watery streaks of blue and green. We pause to take photographs beside a glacial river, and then refuel at a petrol station with a gift shop selling toy trolls. Jonas tells me that there was a revival in patriotism after Norway won independence from Denmark in 1814, and part of that process involved collecting Nordic folktales, in which trolls play a big part. One such story says that when the creatures are hit by sunlight, they instantly turn to stone, becoming part of the rocky terrain around them. With twisted features and scaly skin, the gruesome figures remain an important symbol of national identity today.

And so we arrive at Trollstigen (or "troll's ladder"), a spiralling mountain pass in the Rauma municipality that clings to the rock face as it slides around 11 hairpin bends. Jonas shows me a video of the road being cleared on the first day of spring after winter's snow. I zip up my coat a little further.

Our vehicle nips up the passage and we stop at the top of the valley, where a number of viewing points allow for an outlook over the feat of engineering below. I pick a couple of wild blueberries, and before I can even entertain the thought of accidentally poisoning myself, Jonas has popped a handful in his mouth.

The troll's ladder looks at home in the valley, reflecting the form of the Rauma River that runs alongside it. Like the reindeer lookout and its understated, integrated design, the road seems to resonate with its natural surroundings. I struggle to capture the scale of the site with a photograph on my phone, and Jonas is feeling it too. He says, thoughtfully: "It's really about acting on instinct and trying to capture the scale of things."

As the evening begins to draw in, I leave Jonas at the lookout, where he plans to photograph the Range Rover's headlights as it curves around the bends, leaving luminous trails along the road behind it. On the way to our hotel for the night I think about Jonas's efforts to integrate himself with the landscape; to use photography - like a fairytale of sorts - to make sense of the world around him.

Cocooned in a down-filled duvet, the next morning I wake in the blue light of morning to the sound of water rushing below me. Blinking brings my surrounding into focus: there is a silver birch forest moving with the wind through a glass-fronted wall at the foot of my bed. I am grateful to have slept at all. Juvet Landscape Hotel was the setting for the 2015 sci-fi thriller Ex Machina, and before drifting off I had visions of being kidnapped by a murderous robot. (I think I'd prefer a troll.) Eventually I had settled, even opening up the wooden slats on the side of my cabin to let the mountain air in.

I leave my room and set out to breakfast. The morning is crisp with frost and the kind of air you want to breathe in and crunch between your teeth. Over eggs, pickled herring and slices of sweet brunost cheese, I chat with Juvet's manager Nina. We sit in the main house, which dates back to 1880, and is decked out with Falun-red walls, dark-wood beams and lace-trimmed lamps, channelling a Scandinavian ski-chalet feel. She explains that while the hotel is only in its sixth season, people have been farming the land here for over 500 years, and Juvet remains integrated with the local farming community today. "We could have grown our own vegetables, but there are people here who have been doing it for decades, so it makes more sense to support them," Nina says. And the food makes a lot of sense indeed. Each night guests sit down at a long communal table in the main house to a locally sourced feast, which can include home-smoked trout, Jerusalem artichoke soup and roast lamb with turnips, followed by poached pears with spruce syrup and raw dairy ice cream.

That afternoon, Jonas and I make our way from Juvet to the village of Geiranger, edging between variegated mountain slopes - both autumnal and evergreen - as we go. From the Dalsnibba viewpoint, the Geirangerfjord looks almost Jurassic in its raw, unadulterated beauty. Thunderous waterfalls cast streams of shimmering liquid from near-vertical mountain slopes towards the depths of the fjord, creating gossamer veils of mist that glint with rainbows in the light. A passenger liner slices across the fjord's shadowy surface - here, even this cruise ship looks quite beautiful. On our descent we stop off at Lake Eidsvatnet, a smooth, glassy body of water that reflects a perfect mirror-image of the towering peaks above. It seems as though nature, in the act of flawlessly depicting itself, is poking fun at our human efforts to capture it.

In the evening we move on to our final stop, Ålesund, a port town renowned for its Art Nouveau architecture. It has been named the most beautiful town in the country by The Times. There's no doubt that its colourful harbour cafés are pretty, but it somehow feels flat in comparison to the sweeping majesty of the fjords and mountains that we captured earlier that day.

Jonas suggests that we walk the 418 steps up the Fjellstua viewpoint on Mount Aksla in order to view Ålesund from above. And here the port comes into its own. Arranged over a series of inlets in the Atlantic Ocean, the twinkling town and surrounding mountains emerge from the water like a pod of whales breaching the surface for air.

So embedded in its surroundings, Ålesund is a reflection of the integrated relationship with nature that Jonas has tried to capture throughout the trip. And it is nature - along with the architecture that echoes it, the food that champions it and the people that respect it - that is Norway's true modern-day fairytale