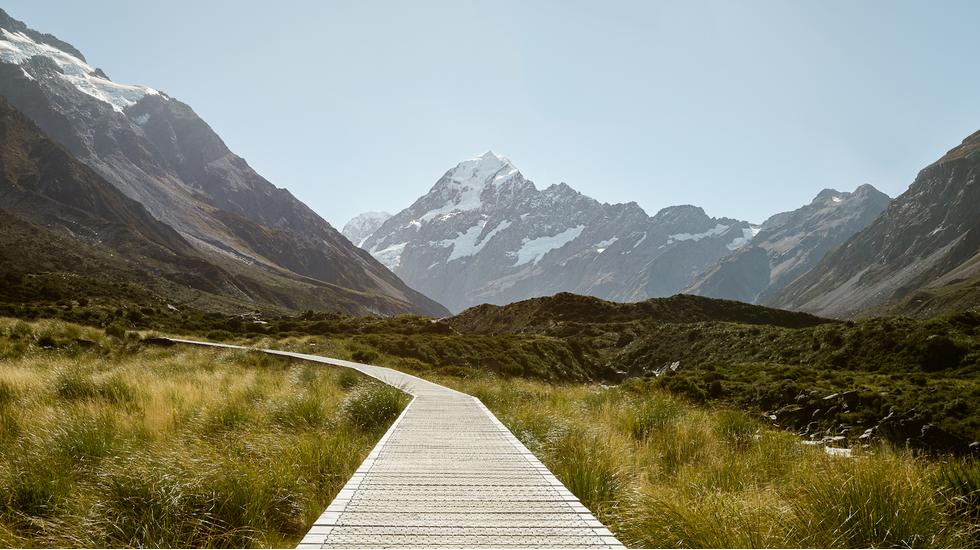 As As my plane landed in South Island, the weather changed from sun to dark purple clouds that melted into rainfall. A two-minute walk from the airport to the rental car was long enough to get completely soaked. Yet I couldn't help but smile as I switched on the engine; my trip was just beginning. The second day turned out to be my lucky day. The sky was clear and the golden morning sun gave me the energy to hike to the Mueller Hut in the Aoraki/Mount Cook National Park.

According to the Māori myth, Aoraki and his three brothers were on a journey around Papatūānuku (the Earth Mother) when their canoe became stranded on a reef and toppled. The four of them climbed onto the top of the canoe but the cold south wind froze them and turned them into stone. Their canoe became Te Waka o Aoraki - New Zealand's South Island - and Aoraki, the tallest of the three, became the highest mountain of the Southern Alps: Mount Cook/Aoraki, which reaches 3,754m into the sky.

By the time I got closer to the fjord of Milford Sound, the rain was pouring. It felt like driving into one of those tiny glass garden bells, where everything is wet and green. It was mystical and beautiful. Around me, waterfalls carved their path, appearing as if from nowhere. In the lowest of places, a thick mist danced above the ground.

The Māori named Milford Sound "Piopiotahi", after an extinct, thrush-like bird. Legend has it that Māui brought a piopio with him from Hawaiki (the original home of the Māori before New Zealand). Proud and ambitious, Māui challenged Hine-Nui-Te-Po, the Goddess of Death, to a duel in order to win eternal life for mankind. He died in the attempt, and as he did so, his piopio flew south in mourning, where the waters of Piopiotahi would come to be.