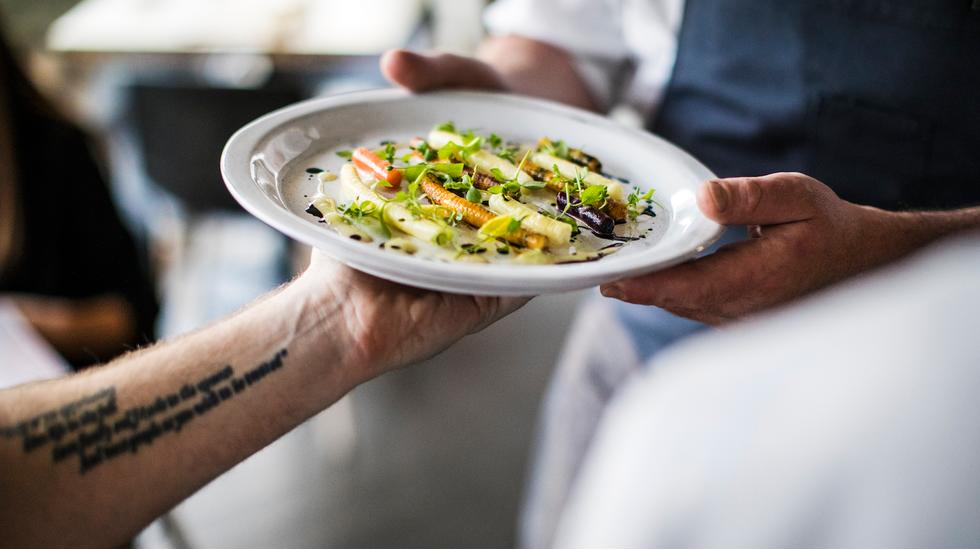 Chef Chef Dan Barber is on a mission to radically change the way we think about food waste with his revolutionary pop-up restaurant, wastED. Together with family members and fellow co-founders, Laureen and David Barber, the trio are tearing up the narrative of how we think about waste across food, dining and design.

First taking place in New York, and most recently on the rooftop of London's iconic Selfridges department store, the transatlantic pop-up offered an ambitious menu built from cuts of ingredients usually discarded and left for the trash.

Boasting a roulette of the some of world's most highly respected chefs, the star-studded line-up has featured culinary heroes Dominique Ansel, April Bloomfield, Daniel Humm and Alain Ducasse in New York, while Raymond Blanc, Fergus Henderson, Isaac McHale, Nuno Mendes and Gordon Ramsay all took to the pass in London.

Entire communities of chefs and mixologists came together to swap and share produce, working together to devise delicious dishes from non-traditional ingredients which are usually ignored. The interiors, curated by Laureen Barber, also came from designers working with otherwise discarded materials, so that everything from the tables to the uniforms were sustainably sourced and upcycled. A huge undertaking, the project had true grassroots beginnings.

It all started on a dairy farm in upstate New York, acquired as part of a life-long dream by Dan and David's grandmother. Soon came New York farm-to-fork restaurants Blue Hill Manhattan and Blue Hill at Stone Barns, where the menus showcase produce from the farm.

But it was Dan's book, The Third Plate, that was the real catalyst of the wastED movement, offering up a whole new way of eating. We caught up with the trio to talk about the inspiration behind the movement, changing minds and winning hearts on both sides of the Atlantic, and their long-term mission to change food and farming forever.

It's such an all-encompassing project. How did the concept of wastED all begin?

David: Blue Hill Farm was a place tied our childhood and so that has a particularly personal meaning. A lot of what we were learned there comes down to personal interest and passion, which gave us the starting point for sure.

Dan: In writing my book, The Third Plate, I looked at cuisines from all around the world and how they came about in culture. A lot of them stem from peasants, eating simply from what the land could provide; they didn't have the luxury of calling something waste because there just wasn't enough available. Instead, they created delicious dishes that ended up becoming iconic. People might consider French cuisine to be the epitome of high-end luxurious food. When the right techniques are applied - braised in a little oxidised wine for example - it becomes not waste chicken, but coq au vin. Bouillabaisse was the damaged fish, which the fishermen's wives used to make into a stew while their husbands sold the regular fish at the market. They didn't call it waste, they called it bouillabaisse.

So this was the inspiration behind the menu. How did you design the dishes?

Dan: We wanted to create a coveted dish with the things we throw away, to show that they can be spectacular. Not just historic examples, but brand new creations to bring stuff into a modern concept. Restaurants are a great place to be creative, having the collective creativity of other chefs brought along even more inspiration.

You've collaborated with some of the biggest names in New York and London. Were there big differences in style?

The most interesting part was the similarities. I saw the same kind of community and interest and introspection and curiosity. Every one of the chefs just got the idea immediately, and some brought dishes directly from their menu which was so fascinating. It means chefs and restaurants are dealing with food waste all the time, we just don't wear it on our sleeves - wastED was an opportunity to wear it on our sleeves. And I think that's where the culture starts to change.

Design also played a huge role. Was this a vision from the very beginning?

Laureen: Our philosophy was that every single part of the project should support the ethos. If our guests were going to come into contact with something, it needed to be a part of the vision. We weren't just looking great design, but stories that were going to resonate and really have some depth to them.

Are there parallels in the food and design industry?

Laureen: In terms of sustainability and being ecologically minded, the world has moved in that direction. This idea of repurposing has gone to a different level, people are looking at the land and finding naturally abundant products like seaweed and figuring out a completely different use for them under the umbrella of design. The parallels are there, because we have such a need to protect our planet and we're more aware than ever before.

How do you go about moving an entire restaurant overseas?

David: We could never have predicted that it was going to go so far. From knowing how crazy the first one was in New York, the idea of doing it across the pond really did make us think "What are we doing?!"

Laureen: That we would be in London, a city I admire so much, was a dream come true! It's the people who made it possible and we leaned heavily on others.

Laureen: Yes, absolutely. It might sound cliché but there's been this sense of community, it's really true that everybody knows somebody. New York and London feel so close to us now.

And finally, can you share your top picks for New York and London?

Dan: I barely left the kitchen in London! But on the last day I got out a bit early and went down to The Dairy which was extraordinary - I highly recommend it. In New York, you've got to come to Stone Barns.