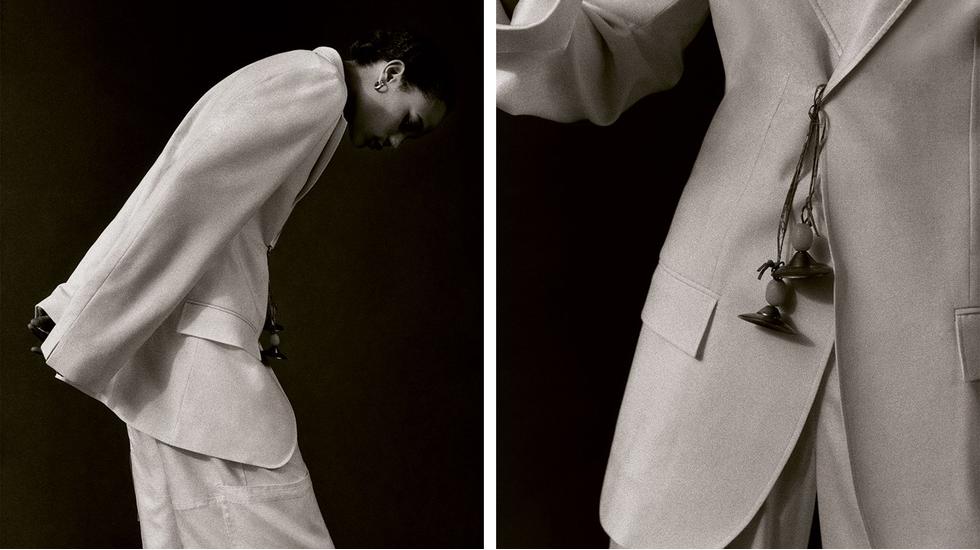 This This article appears in Volume 27: The Books Issue The 28-year-old fashion designer Grace Wales Bonner presents contemplative collections that demonstrate a wisdom beyond her years. A curious traveller with a particular interest in India - having journeyed to Udaipur, Goa, Delhi and beyond - she is also a serial collaborator, having joined forces on projects with photographer Harley Weir, filmmaker Jordan Hemingway, musician Sampha, London's Victoria and Albert Museum and most recently the Serpentine Sackler Gallery.

Her designs recall, rework and reuse references from creatives across diverse disciplines - the Pulitzer Prize-winning critic Hilton Als, painter Jacob Lawrence, musician Alice Coltrane, sculptor Terry Adkins, and poet and novelist Ben Okri, among others. For her Spring/Summer 2018 collection, Als's essay, James Baldwin/Jim Brown and the Children, led Wales Bonner to explore male sexuality, with the show progressing from day to night to the morning after. For her Autumn/Winter 2019 collection, Okri wrote a piece specifically for the presentation and read it live. Season after season, research is at the forefront of her creative process and, unlike many other designers, she explicitly references context to her audience, her show notes reading more like bibliographies.

For her Spring/Summer 2019 collection Ecstatic Recital, Wales Bonner included text from the spiritual teacher Ram Dass's book, Be Here Now. She had been listening to Coltrane and exploring the works of Adkins, both African-American artists who expressed a strong connection to spirituality and followed Eastern practices. Dass was central in bringing Eastern beliefs to the West during the 1960s and 1970s. The Hanuman Foundation, which owns the rights to Dass's work, granted Wales Bonner access to its archives, from which she drew quotes for her collection. A selection of T-shirts, polos, track pants and button-downs have his words written across them.

How has your heritage informed your sense of self?

I grew up in south London to a British mother and British-Jamaican father, although I also spent some of my childhood with family in Jamaica, which was quite memorable. My grandmother is from Clarendon in Jamaica and I remember visiting her at her beautiful and breezy house and walking in the hills. I became much more inquisitive about my heritage and cultural history as I grew up, and spent a lot of time researching black histories and theories.

What led you to become a designer?

I had to decide whether I wanted to be a historian, an artist or a designer. While studying at Central Saint Martins, I began to integrate my interests in research and post-colonial studies with the creation of clothing. I realised that fashion can communicate complex ideas immediately and I was interested in that power.

Although you've since introduced womenswear styles, you originally launched with menswear, which continues to be your priority. Why?

At the core I'm interested in tailoring as the epitome of the European luxury wardrobe, but also in looking at how I can integrate that with another cultural perspective. My clothing is very connected to considering black male representation.

Is your process more inspired by research or relationships?

It's a mixture. When I first started designing, I worked closely with friends like Wilson Oryema and Dennis Okwera, whom I find very inspiring. I am often drawn to a certain character or an instance where a man might have greater opportunity to be more expressive.

When did you first discover Ram Dass's book Be Here Now?

I came across it years ago. Then when I started thinking about the Spring/Summer 2019 Ecstatic Recital collection and the ways that different groups of travellers relate to India, I reconnected with his work. I admire this beautiful book and feel its message about staying present is ever relevant, so I was keen to introduce it to a new audience. I am interested in creating soulful and meaningful clothing, so it felt like a natural connection.

You've previously discussed art as a form of spirituality. Can you explain?

In my Serpentine show A Time for New Dreams, I examined how creating artworks can be close to spiritual expression, as intellectual formations can have a transcendence. For example, the American artist James Hampton felt that he was receiving revelations from God that guided him to create an elaborate shrine - in that instance his artistic expression was guided directly by his own spirituality. I am interested in being able to channel spirituality through creation.

How do you find the time and headspace to work on such a variety of creative projects?

Travelling is important to me in inspiring my work and collections. In the same way, working in different mediums and with different collaborators feels essential to my development. My role changes for each project - sometimes I am commissioning artists to reflect and respond to my universe and at other times I am much more guided by their output.

What have you learned from your collaborators?

I am constantly learning from the people around me. My collaborators give me a new way of viewing or creating a more complicated and poetic picture that broadens my vision. I believe that my work is not about a singular perspective, so these conversations and encounters are essential. I'd love to work with the filmmaker and installation artist Isaac Julien in the future.

What are you reading right now?

Tell My Horse: Voodoo and Life in Haiti and Jamaica by Zora Neale Hurston.

The Shiv Niwas Palace Hotel is an airy former palace that has a sort of faded grandeur. I like the grounds and the scenery overlooking Lake Pichola - they have a particular charm.

A thali at Sheesh Mahal in The Leela Palace hotel while gazing out over the lake is a perfectly balanced meal, as you can taste various dishes in one platter.

Watch the locals' morning routine at Lake Pichola. While in Udaipur shooting our film The Love With Which I Wash in 2016, Harley Weir and I would go there first thing to observe their ritual washings, take in the fragrances and listen to the chanting.

There are a number of beautiful boutiques by the lake where you can acquire antique photographs and embroidered vintage clothing. I collect the former and purchased several photos of maharajas, as well as a stunning shisha embroidery.