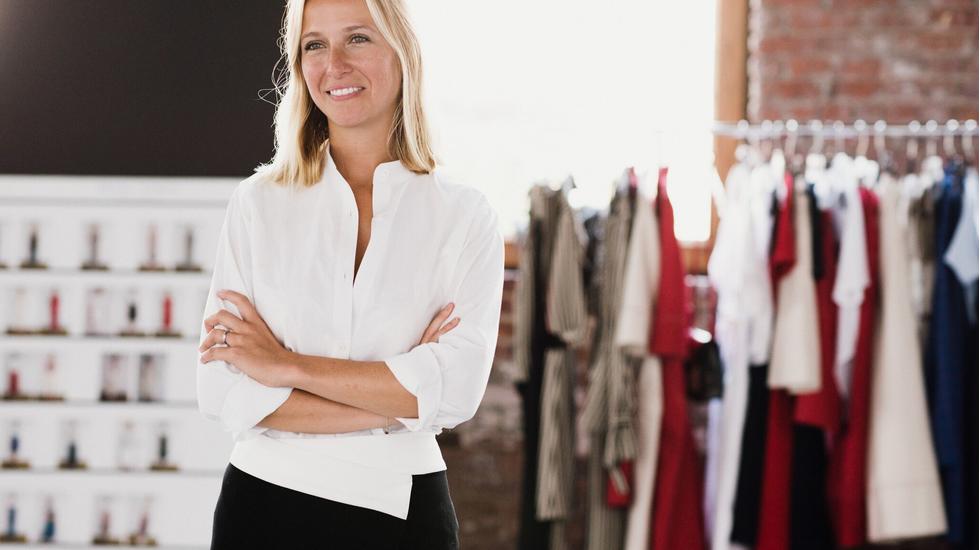 Misha Misha Nonoo is a woman on a mission. Her eponymous sustainable fashion brand doesn't just sell womenswear, it sells a concept: waste less - less time, less money and less material. Everything is made to order, eliminating the risk of overproduction and the collection is centred around "The Easy 8": eight monochromatic separates that can be used to create a minimum of 22 looks.

She believes that if you streamline your wardrobe and invest in her pieces, you'll not only save time and money but also help push the fashion industry towards a sustainable future. She's not alone in her mission. Misha has a number of high-profile friends who've got behind her brand, including Meghan Markle. The Duchess of Sussex wore Misha's now famous Husband Shirt (the shirt that "sealed the deal") during her first public appearance with Prince Harry.

Don't expect Misha to brag about her connections, however. She's as discreet and polished as the looks her brand touts. Her focus is on empowering women, changing the fashion industry and yes, making sure her dog, Thatcher, approves of Mikey, her fiance.

Where can we find you?

Where did you grow up?

I was born in the Middle East, in Bahrain. My father is Iraqi-Jewish, my mother is English. I lived in Bahrain until I was 10, then moved to London. When I was 19, I lived in Paris for two years. I finished university there, studying international business with French and then I moved to New York when I was 23. So I've been in New York for the past 10 years and I love it. It's where my parents met, so I guess it's always been on my radar.

How has your upbringing shaped your brand?

Paris had a big effect on me aesthetically but my time in the Middle East shaped my brand's mission. There are so many women living there who aren't empowered, who don't grow up with options. I'm a designer yes, but my business is really about allowing a woman to move seamlessly throughout her day. It's about giving her autonomy and allowing her to fulfil whichever role she wants to fulfil, whether that's being a stay-at-home mum or a financier.

How did Misha Nonoo start?

Truthfully, it started before I had a business plan. It started before I even had a business name. I was sitting at a restaurant on the Lower East Side one day wearing a sample I'd made. A lady sitting two tables away came over and asked where my jacket was from. I told her I'd made it myself and she asked if I'd made anything else. I met her at her office at Intermix that Wednesday with a suitcase of samples and she wrote me a cheque on the spot.

How has your brand evolved?

We launched in New York eight years ago as wholesale only. We were a traditional fashion brand in that we did four collections a year and sold to major department stores including Bergdorf Goodman, Neiman Marcus, Saks, Shopbop etc. Yet as I saw how the fashion industry was changing, especially how social media was changing retail, I decided to wrap all my wholesale accounts after about five and a half years of business and go fully direct-to-consumer. That meant changing our manufacturing process entirely. We're now a sustainable fashion brand in the sense that we eliminate all waste. We don't produce any inventory. Each piece is made-to-order, then shipped from our female-led factory. Our recent pop-up shop in London was an inventory-less showroom. I genuinely think that's the future of fashion.

What have been the biggest milestones in your career?

Landing our first wholesale account; that was a big one. Another was being part of the CFDA Vogue Fashion Fund. I got a lot of interesting, conflicting advice. Andrew Rosen from Theory, Anna Wintour, Diane von Furstenberg - they all told me different things, and so my takeaway was that you have to stick to your guns.

Another major milestone was the Instagram show we did in 2015. I enlisted 33 friends and friends of friends who had influence on the platform. Everyone from Lena Dunham to Olivia Palermo to Meghan Markle posted a picture of themselves in the collection within a 12-hour window, and for every post we made a donation in their honor to Women for Women, a really worthwhile charity that supports women's education around the world but particularly in refugee communities.

Another milestone was going direct-to-consumer, and another was online manufacturing. There have been so many milestones and each one has helped galvanise me to take risks in the next chapter. I haven't ever really stuck to the plan - that may be a good thing, it might not be a good thing. I guess I don't really know any other way.

Can you talk about the events you put on at your recent pop-up store in Marylebone?

We did one on women's leadership and empowerment that was fascinating. Samantha Cameron, Dame Helena Morrissey, Caroline Rush CEO of the British Fashion Council, Sue Jones creative director of Oka all spoke - their insights were very interesting.

Our fashion sustainability event was great too. Having the pop-up in Marylebone has taught me so much about our customer: where she comes from, what she does, where she goes. I've loved having a store. The next one will be in New York from September through to December. We're doing LA in the first quarter of next year, and then we'll decide where we will be permanent from there.

Who are your biggest role models?

It changes all the time depending on my phase of life. When I'm in businesswoman mode, I look to someone like Dame Helena Morrissey. She's had a prolific career, nine children, an extraordinary partnership with her husband and started the 30% Club which has been very successful in increasing female leadership on boards and in senior management. My role models have changed but they've always been strong women who care about their career, family and philanthropic legacy, women who know what they want and go after it passionately.

Does your fiancé Mikey look to you for style advice and has his wardrobe changed at all since you've been together?

Yes. He's incredibly sweet because he will often just wear what I give him. Things appear in his wardrobe and then become his go-to pieces. My collection is really designed around how a man dresses. How he has those five button downs that he loves, those two blazers, those three pairs of trousers and that one suit he relies on. I wear separates - and the best-selling pieces in the collection are always separates - and I think it's because I always think about that rotation.

What's the best piece of advice you've ever received?

Let me give you the worst piece of advice I've ever received. I've always been very happy that I've ignored it. To hire your weaknesses. Everyone says hire your weaknesses like it's some easy fix. But unless you understand the job you're hiring for, it's really hard to hire for that position successfully. I'm not saying that you have to be an accountant to hire someone who's working in finance but you have to have a good understanding of what the job takes. Related to that, a great piece of advice is to hire slowly, fire quickly. Think thoroughly before you bring someone on board but if it's not working out let them go quickly.

Does Thatcher approve of Mikey? Have they bonded?

When they first got together… I mean when we first got together, she was very territorial. Whenever he'd stay at our apartment she'd sulk. Then I think she realised that this one was going to stay. Now that Mikey and I are very much a permanent thing, she always runs to the door to greet him and asks for a belly rub - I think they're best friends.