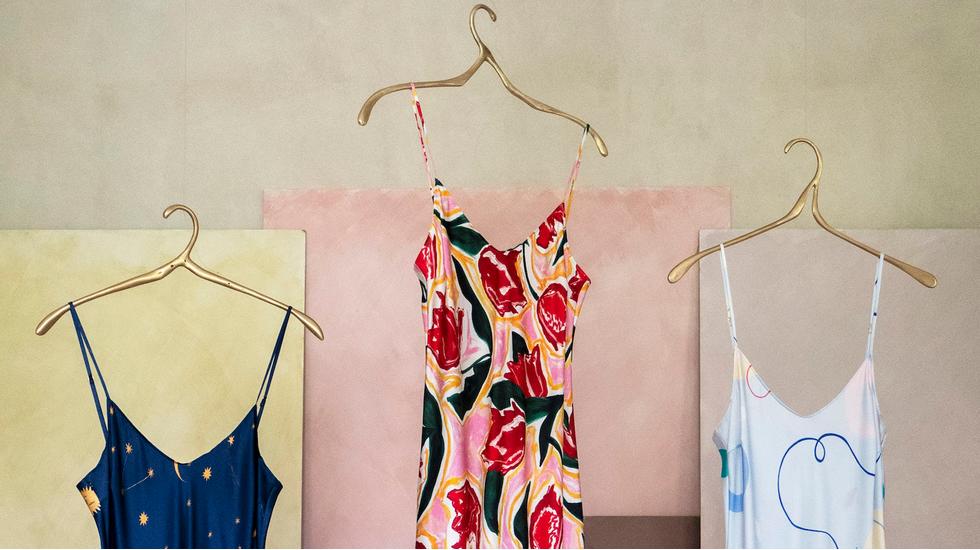 When When someone wears a dress that has been cut on the bias you can spot it a mile off. It hangs a certain way and the wearer's saunter comes with a little added swoosh. Cut on the grain, rather than following the straight line of the weave, the bias cut is all about accentuated bodylines and soft drapes. Kate Moss was a fan, Naomi too - in fact, the slip dress is arguably the fashion moment of 90s. Two decades on the lightweight silhouette remains popular as ever.

Backing that trend is former Alex Eagle buyer and BIAS founder Olivia Pope. Launching in 2019 with just one style of dress, the brand (and its limited production runs) was born from an idea that came to Pope after she found herself in a fashion standoff at a wedding where she, and three other guests, were all caught wearing the same frock. "Restricting the number of dresses in each run takes away this risk for the wearer, and also has a positive environmental impact as we have no surplus stock. The classic retail model of seasonal fashion that ends up on sale is outdated and wasteful."

Having reimagined retail models and undertaken a covetable collaboration with Alighieri, Pope's next move is a collab with Partnership Editions premised on creating three unique, wearable works of art imagined by artists Rose Electra Harris, Julianna Byrne and Venetia Berry. We're convinced that, whether deemed an art buy or fashion purchase, these are investment pieces (that we need in every available print and colourway).

Where did you grow up? How did this place shape or inform you?

I grew up in the English countryside of Wiltshire and have recently moved back, having lived in London. I've realised that since moving away from the city, I am certainly a country mouse and feel at ease with space and green around me.

How does the name BIAS connect with your brand?

The word "bias" refers to the cut of the silk used to create our slip dresses and also a tongue in cheek reference to the cultural term, with which we are all so familiar.

Feminine, classic with a sense of humour.

Tell us about your latest collaboration with Partnership Editions…

We love what Georgia (Spray) has created at Partnership Editions and feel a synergy between the two brands - especially in relation to the concept of editions. We have produced three unique wearable works of art with Rose Electra Harris, Julianna Byrne and Venetia Berry. It's been wonderful to see the artists' work translate so fluently onto the silk.

Where is your studio and what does it look like?

My studio is at my home in Wiltshire; it's an oasis of calm among the chaos that building works and young children bring.

What songs do you have on repeat in your studio?

I am currently listening to the Alex Eagle Studio's playlist series Brightness in the Bleakness on repeat.

Tell us about your creative process…

Our collection isn't designed in seasons, so we don't have the usual pressure to design multiple collections a year. This is quite freeing and means we can produce new editions when inspiration strikes. Our latest editions, which were designed in lockdown, are bright and summery - just the tonic we were after during these strange times!

The concept of releasing the dresses in limited editions came about when I wore the same dress to a wedding as three other girls. Restricting the number of dresses in each run takes away this risk for the wearer and also the environmental impact as we have no surplus stock. The classic retail model of seasonal fashion that ends up on sale is outdated and wasteful. Bias dresses are wardrobe staples that will stand the test of time.

You previously collaborated with Alighieri. How did that come about and what element of the collaboration did you most enjoy?

Rosh is a very dear friend of mine, for whom I have huge admiration. I have been privy to seeing her grow her brand from the early days and will always site her as a major inspiration to me in life and business. Working with her to create a slip adorned with jewellery was really fun and hugely satisfying.

Give us an insight into collaborating with Julianna Byrne, Venetia Berry and Rose Electra Harris as part of your work with Partnership Editions?

We wanted the artwork on the dress to be a true expression of the artists' hand, so the artists had free rein to design their perfect print. The celestial energy of Juliana's print, the feminine lines in Venetia's and colourful florals in Rose's are so different but sit harmoniously together in the capsule collection.

All collaborators are London-based artists, and we're feeling inspired! What are some of the best art classes to sign up for in the city?

Partnership Editions' virtual art classes during lockdown were incredible, and accessible from anywhere, which was helpful for me living in rural Wiltshire. The classes are still available now on the Partnership Editions website.

The Night's Sky slip imagined by Julianna Byrne is inspired by celestial bodies. With that in mind, can you share some of the best places for stargazing?

The clear skies of Wiltshire make for pretty incredible viewing, but the best night's sky I have ever seen was on a tiny island in Fiji - completely magical.

Advice on packing silk when you travel…

Each BIAS slip comes with its own silk bag to protect it when travelling. When you arrive, hang your dress in the bathroom and the steam will magically erase all creases. BIAS dresses are also machine- and hand-washable, which is handy when on the move.

Five hotels in your bookmarked pages, and the five BIAS designs you'd pack for each…

Tell us your steadfast tips for styling slip dresses.

The thing I love about a slip dress is that you can style them up or down to suit your mood. I am quite minimal in my approach to dressing, so love to wear with a white T-shirt or a chunky knit in the day and slip on some gold jewellery and a red lip at night.

BIAS slip dresses (in a handful of colours), a With Nothing Underneath linen shirt, a Blaze Milano blazer and Veja trainers.

EAT: Ducksoup, the perfect place to catch up with my favourite people.

DRINK: Cecconi's Mayfair for a martini with my husband, Nicholas.

SHOP: Jessie Thomas for delicious jewellery and HOWE for antiques.

DO: Visit the Royal Academy of Arts and its incredible exhibitions.