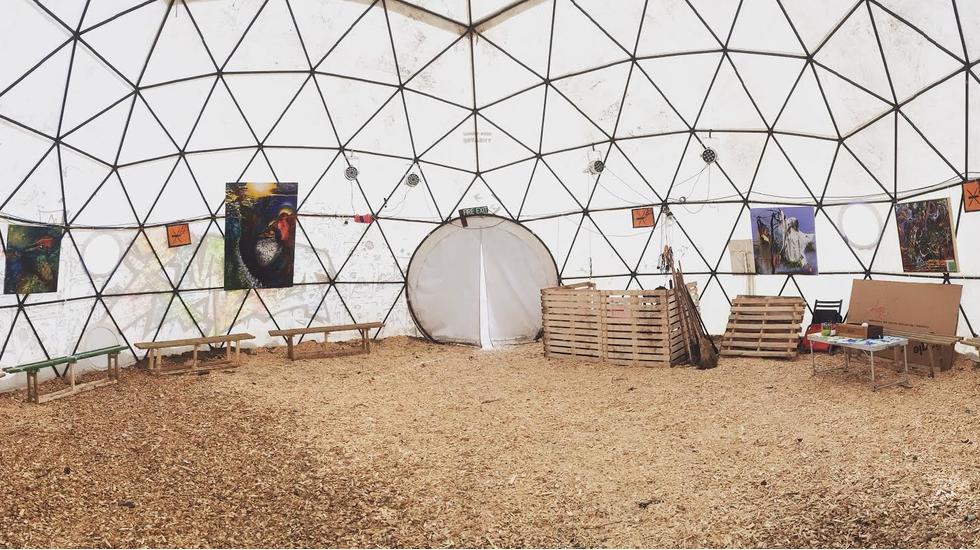 On On a balmy Tuesday evening, sitting around one of the Young Vic's street-side tables, Joe Murphy and Joe Robertson, founders of the Good Chance theatre in Calais, are talking about clichés. At least they're trying to; they keep being interrupted by bow-tied, bowler-hatted folk after a lighter. Graciously, Robertson sparks up the proffered rollie before returning to the conversation at hand. "Do you think that we're talking in clichés?" It's part question, part provocation.

Shortly after graduating, the playwrights (who met at Oxford) erected an enormous, white, honeycomb-shaped dome in the middle of the notorious refugee camp in Calais that is commonly known as The Jungle. Here they ran workshops, performed plays and held riotous parties on Saturday nights. Quickly, the men became closely acquainted with their regular clientele, despite being unable to verbally communicate. They became masters of mime. They had moments of exaltation, sadness and intense boredom too. So how, then, can they compress the intensity of their experience into a conversation with me, more accustomed to the Cut than Calais, without speaking in clichés?

They can't, is their answer. But they are keen to point out that clichés are no bad thing. It might seem like a strange stance for two writers to adopt, but the Joes have forged a reputation on their good-natured ability to challenge assumption.

When the pair first arrived at the camp, they were offered food and rugs, and found themselves stripped of a set of conceptions and cynicisms they didn't even know they had. "We realised then that these conceptions are everywhere. And the cliché is that it was then we started talking in clichés." Robertson offers an example: "Expression is a human right. Eighteen months ago, we would have gone 'what the fuck are we on about? Of course expression is a human right.'" But, in a camp whose inhabitants have been rendered nearly voiceless, expression and human rights are abstract terms. "In this context, it actually needs saying, and people need it in writing."

The couples' decision to go to Calais was not pre-planned. They had just finished working on a play in London and the lull in their schedule coincided with the intensifying of the refugee crisis. They packed their bags, intending to travel to Munich. On arriving at Calais, they stopped. It was like a city, populated by thousands of people, all sectioned into microcosmic echoes of their communities back home. "There were churches and mosques," recalls Murphy. "There was a women's and children's centre. There were all these individual places for particular denominations of people to go, and no place where everyone could go." Their solution: a theatre.

They went home and came back with an enormous white dome. Practical difficulties? No, that was the easiest part, they say. Within minutes of arriving back in Calais they were surrounded by crowds of people, many trained engineers and technicians who, pointing and shouting, deftly built their theatre.

The main challenge they faced was ideological. Their fundamental objective was to act as a positive force in a situation that was being repeatedly distorted by a visceral negativity, the wrath of which was often directed at them, too. Across the UK there was resistance, mutterings about the necessity of a theatre in a situation where the priority should be food and clothes. "It was really provocative," says Robertson. "We got Express articles and Mail articles saying: 'God, there's a theatre in a refugee camp. People found it so bizarre"

For the duo, the notion that art and aid are somehow mutually exclusive not only revealed some of the unsavoury aspects of our approach to refugees, but also exposed a lot about our attitudes towards theatre. "In this country, we have quite a decorative idea of what art is," explains Murphy. "We don't instinctively feel that it is for political purposes."

Despite suffering some criticism, Good Chance was soon championed by some of the more liberal newspapers. Its profile was undoubtedly raised by a string of famous supporters - Jude Law, Benedict Cumberbatch, Tom Stoppard - who retrained the national focus on the two Joes, highlighting their attempts to re-instil a sense of humanity among the audiences and actors in Calais.

But what is left when the media storm dies down? Can short term publicity make a tangible impact? "Part of me feels very weird to be honest about welcoming high-profile people out there," says Murphy. "But then there's another very strong part of me that thinks the ethics of celebrity is a luxury debate in a situation so extreme."

"It was insane. Jude, Tom and other famous faces came out and had a positive effect," continues Robertson."Use what you have got to make the world better. If you have got fame, profile and money, use it."

As for being seen as a flash in the pan? The Joes see it as their responsibility to make sure that doesn't happen. When the surrounding campsite was demolished, the pair dismantled their theatre, despite being assured they could leave it standing. Without its community, it served no purpose. Yet the dome didn't lay dormant for long; last summer, it was rebuilt on the Southbank. Today, Murphy and Robertson are toying with the idea of taking it somewhere else on the migrant trail, perhaps Greece or Jordan. "It remains the same process," concludes Murphy. "You have to go and see something. And only when you have seen something you can say, yes, this is what needs to happen."