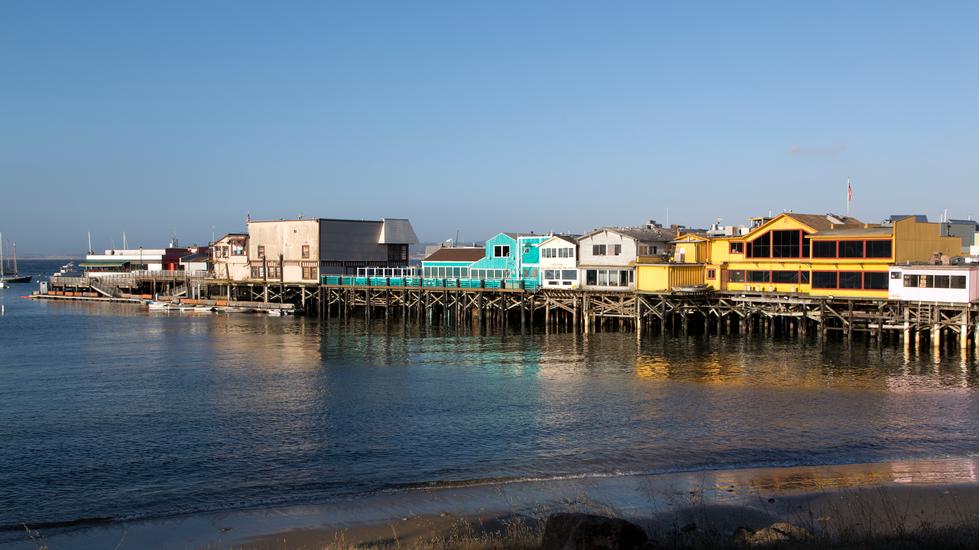 Monterey Monterey County has come a long way since it served as the setting for John Steinbeck's 1945-published novel Cannery Row, which opens with a description of the city's docks. While you'd be hard pressed to recognise Steinbeck's Cannery Row - or its salubrious fictional characters - in the revamped sardine factories lining Monterey's waterfront today, this understated Cali town retains a magical, Janus-like character.

Jump into a car or on a bike and dip in and out of the peninsula's secreted-away settlements: historic Pacific Grove, with its Victorian clapboard cottages, the chocolate-box cobbles and unusual architecture of storybook Carmel-by-the-Sea and the artist enclave of Moss Landing, just a 25-minute drive away.

Like its residents, Monterey County is well-heeled and well-kept - but its discerning side keeps good company with quirkier, under-the-radar spots. San Francisco urbanites are starting to recognise the bubble of calm that surrounds this area, but guarded residents keep their favourite hangouts under wraps. A stroll away from Cannery Row's hubbub, you'll find Italian restaurants and chic French bistros. Venture further afield to the satellite villages dotting the peninsula and local brew houses and sustainable vineyards to rival Napa's begin to appear. Wherever you go, however, you'll encounter glorious landscapes - the shimmering sea mists, stretching shorelines, endless horizons and boulder-strewn coastline punctuated by wind-whipped beaches that led Steinbeck to call Monterey "a dream".

Just two hours' by car from San Francisco (and another five from Los Angeles), Monterey County is the perfect stopover on a road trip down the Pacific coast. Whether you're a literary pilgrim seeking what Steinbeck described as the city's "quality of light" or a BLL fanatic wanting to get lost in the show's setting, it's time to turn up that Michael Kiwanuka track and hit the highway. Let's hit the road.

On the south side of the Monterey Peninsula sits arty, village-like Carmel-by-the-Sea, a quaint, old-English-style town packed with galleries, local boutiques and smartly dressed residents. Clean-cut – and recently revamped – The Hotel Carmel, owned by boutique hotelier Classic Hotels, offers 30 spacious, white-shuttered rooms decked out in soft neutrals, warm wood and woven prints. Step into the courtyard for a glass of aromatic chardonnay, then head to nearby Stationæry for a dozen Morro Bay oysters, Monterey Bay halibut and a large glass of a blousy Redwood Valley sauvignon blanc.

We’d suggest adding on a few extra days to your road-trip itinerary to enjoy some pine-infused R&R at this luxurious ranch stay in Big Sur, about an hour from Monterey. Post Ranch Inn perches precariously above a verdant slope tumbling down into the Pacific, in an area whose coastal roads are known for their statuesque beach houses. The adults-only retreat is sympathetic in design to its surroundings: cabins made with recycled redwood sport floor-to-ceiling windows that frame the vistas beyond, and are warmed by flickering fires. Most come equipped with outdoor soaking tubs and private desk space from which to drink in views across the ocean or gaze at richly scented pine forests. Savour a nightcap Lavender Martini from the restaurant bar and then enjoy your best night’s sleep in a long time, after nodding off to the gentle sound of the waves hitting the shore.

If walls could talk, we’d be taking the clapboard ones of Merritt House Hotel for dinner. Tucked a few streets behind Monterey’s wharf, this beguiling B&B has been in business since 1830. We can't confirm whether or not it's the oldest property in town, but as a registered US Historic Place, it's certainly earned its position in a neighbourhood stuffed with antique architecture (the city's impressive Museum of Art and the Colton Hall Museum are both nearby). A walk under the columned entrance pulls you back to another era, with cute country interiors nodding to the building’s heritage – think original fireplaces, diminutive four-poster beds and vaulted ceilings. When you step outside, you're no more than a 10-minute walk from Monterey's world-famous aquarium and Cannery Row. Plus, the city’s best eateries are just around the corner. Start explorations with breakfast at Alta Bakery and Café, grab a post-lunch scoop from Revival Ice Cream, then swing past Fieldwork Brewing Company for a few local brews, before heading back to your cosy quarters.