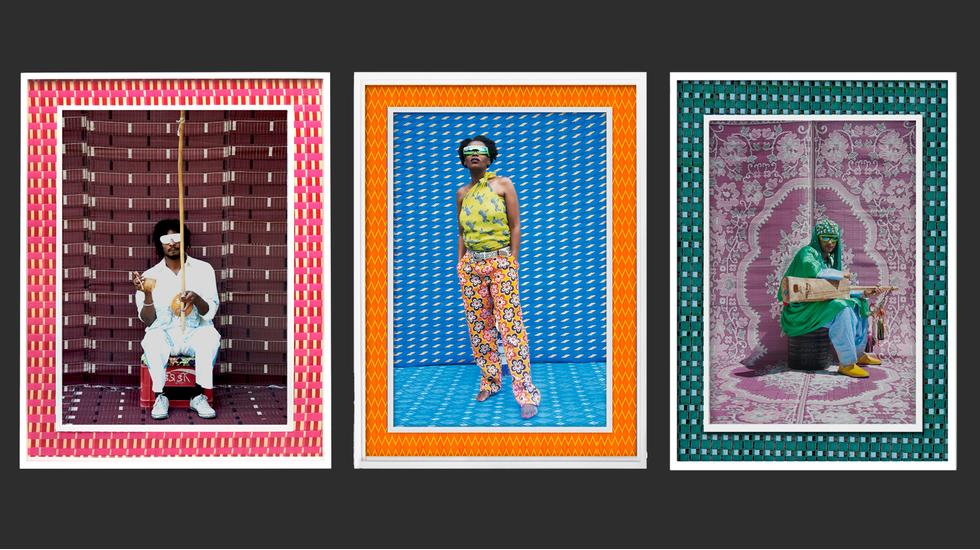 A A jack-of-all-trades is supposedly a master of none, but Hassan Hajjaj's series My Rock Stars Volume 1 proves that the Moroccan photographer is a man of many talents. These lively portraits see Hajjaj juggle roles as an artist, tailor, conductor, weaver, photographer, embroiderer, manager, roadie and designer. He is truly a one-man band, marching to the beat of his own drum.

The artist's journey began in the small Morrocan harbour town Larache, where he spent his early days fishing, gambling with Coca-Cola bottle tops and designing and creating jewellery. With his natural flair for artisanal craftsmanship, inspired by the traditions of sub-Saharan Africa and the Sufi brotherhoods, Hajjaj's diverse skill set came into its own when he moved to London in the 1970s. He soon found himself exploring many different interests - promoting reggae nights as well as styling, designing and running a fashion boutique in Covent Garden.

But for all his success, Hajjaj has remained true to his roots. His past work has examined the stereotypical notions of Morocco and North Africa perpetrated by European Orientalist paintings of the 19th century. Reimagining these images, he uses materials and motifs with which we are all familiar, but rearranges them in unexpected ways.

My Rock Stars Volume 1 is less of a critique than his previous work, which includes the celebrated series Kesh Angels, focusing on questions of female authority in Morocco. These images are instead a deeply felt tribute to a diverse group of people, all of whom are artists in their own ways - from the henna women of Marrakech, via the fashion designers and dancers of Paris and London, to the Gnawa music masters of Morocco. Recognisable images of Pepsi cans evoke Andy Warhol's Pop Art while the images' vivid and textured backgrounds are inspired by the weaving traditions of Hajjaj's native country.

The key word in the title is 'my' because the photographer's subjects are not all global superstars, except in his eyes. Here the artist's friends find themselves supersized, accessorised with a signature addition of sunglasses, socks, hats or suits - and powerfully immortalised through his lens.