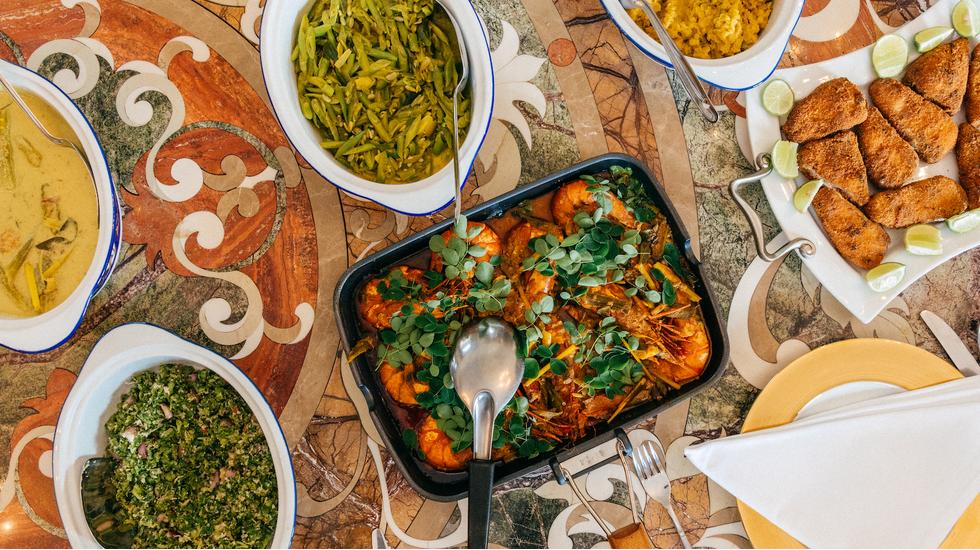 Inspired by the home cooking and roadside stalls of Sri Lanka and southern India, Hoppers is the place to go for Sri Lankan cuisine in London. The group's director, Karan Gokani, is the only guide you'll want for the inside track on where to eat, drink and stay in his home country. Here, he shares his tips with us.

Travelling around Sri Lanka, you can't help but notice the locals' love of food - be it "short eats" from street-food stalls in bustling Colombo, the Dutch Burgher-influenced banana leaf lamprais or a spectacular home-cooked feast (if you're lucky enough to be invited to one). For a relatively small island, the cuisine is extremely diverse: head to the north and you'll find coconut-heavy dishes in Jaffna resembling those found in southern India. There's a particular fondness for odiyal kool, a thick seafood stew generously loaded with prawns, crab, cuttlefish and thickened with odiyal (palmyrah root flour). In the south you'll find a rich haul of seafood and an emphasis on strong flavours likes the ambul thiyal, a fish dish typically made with tuna and cured with goraka for tartness.

During my most recent trip, I was researching both the cooking and architecture of the south-west, along the much-travelled route that stretches from Colombo down to the old colonial town of Galle, for our new restaurant in King's Cross. Our first stop was Colombo. I love spending time in the capital - most travellers pass through quickly on their way to other parts of the island, but scratch the surface and you'll find that the city has much to offer. I head to Galle Face Green when I'm in need of some fresh air. It looks out over the sea and is the perfect spot for some local street food, especially acharu (spicy fruit pickles) and isso vade (prawn and lentil fritters) followed by a chilled Lion beer at the nearby Galle Face Hotel while watching the sun set.

At night I head over to Upali's for dinner followed by cocktails at Baillie Street Merchants and a nightcap with friends at Ward7, Jetwing Colombo Seven hotel's rooftop bar. It's a great place to witness the city winding down.

Our next stop was Bentota, home to some of Sri Lanka's best beaches but also some of its most beautiful architecture. At Hoppers, we've long been inspired by the work of visionary architect Geoffrey Bawa, who created a new modernist language for architecture in Sri Lanka. He designed many buildings in Bentota, including the railway station which resembles a little village veranda. The windows, which are decidedly modern, were made to capture the shape and form of the windows of 1960s railway carriages. The station and veranda have heavily influenced the design of our island bar at the new restaurant.

Our final stop was the old town of Galle, taking in the sights of the colonial Galle Fort before heading to the market for some fresh fish. Sri Lankan seafood is second to none: we've developed a crab kari and some barbecue black-pepper curry-leaf prawns for our new menu inspired by what we ate by the beach down south.

Finally, we spent a night doing a Hoppers takeover of the Coat of Arms Bar at Jetwing Lighthouse hotel. It's one of my favourite properties on the island and is a big inspiration behind the wall and ceiling finishes of our dining room at King's Cross.

Slightly outside the bustle of Colombo, but the only hotel with a private beach and it has a colonial feel like none other. Stop by The Seafood Cove for the best hot-butter cuttlefish washed down with a chilled Lion beer. I proposed to my now wife here five years ago.

Upali's is probably the most authentic Sri Lankan restaurant you can find in Colombo. Most locals prefer cooking at home to eating out, so when a place is this packed with locals you know it's good. The spicy mutton varuval is my favourite dish, followed closely by the black-prawn curry.

I never miss a chance to eat lamprais or the black-pork curry for lunch at The Dutch Burgher Union. Be sure to book ahead as they run out very quickly.

The Galle Face is a heritage hotel on the charming Galle Face Green. Sit on the veranda with a cocktail for a stunning view of the sunset.

Ward 7: For one of the best bird's-eye views of Colombo, head over to Ward7 at the Jetwing Colombo Seven hotel.

Bentota Beach Hotel: A great, architectural pit stop designed by Bawa in the Sixties, en-route to dipping your toes in arguably one of the best beaches on the island.

The Paradise Road Villa Café: Another beautiful Bawa-designed property. I always stop off for the incredibly fresh lemongrass salmon or black-pork curry with rice.

Lunuganga Estate: Once Bawa's own country estate, make like the master architect himself and sip on gin-and-tonic sundowners on the terrace overlooking the lake.

Jetwing Lighthouse: One of the most iconic hotels on the island, this is my top choice unless I'm travelling with a large group and decide to rent a private villa by the sea further down south. The Coat of Arms bar is decorated with amazing 18th-century batiks, and inspired the features and design of our new restaurant's dining room.

Tamarind Hill: Time seems to stand still at this stunning boutique hotel in Galle and the rice and curry served at lunchtime is arguably the best you will eat down south.

Closenberg Hotel: One of the oldest properties in Galle, this family-run hotel is located on a hilltop overlooking the ocean. Head to the Luna Terrace and watch the sun set with an arrack sour while taking in the best view of the south coast.