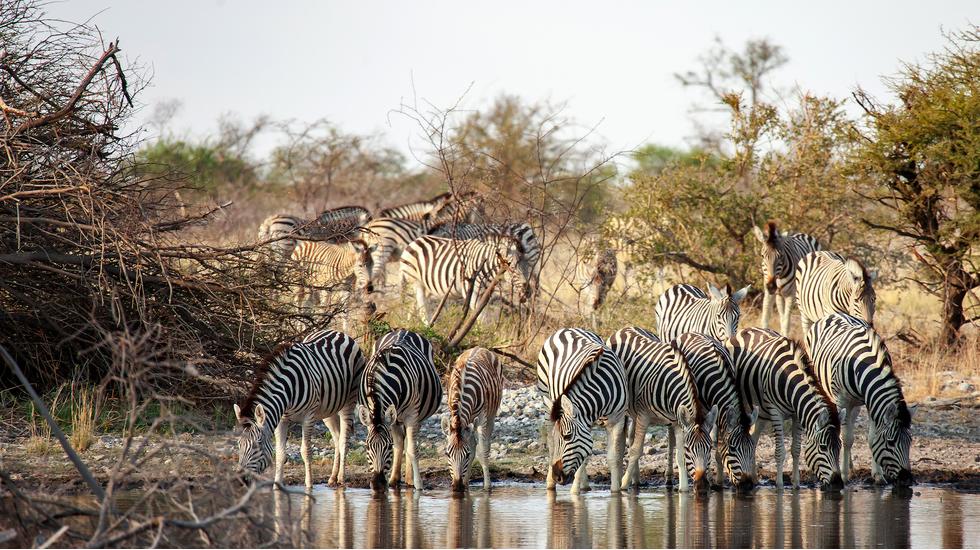 If you want to see the Big Five within the first two hours of your safari without spending thousands a night, Shamwari is your go-to. Often overlooked for larger South African parks, such as Kruger, this Eastern Cape locale offers multiple accommodation levels to suit various budgets. The ground team organises several daily game drives as well as afternoon tea, sundowners and outdoor meals around the bonfire. In terms of affordability, the Explorer Camp will give you the best bang for your buck. It is also the closest accommodation option to nature and counts a plunge pool among its amenities.

Bordered by the Victoria Falls and the Zambezi River, the Zambezi National Park is one of Africa's most spectacular safari zones. When you're not drooling over the falls, the Zambezi River Game Drive's network of paths branch off of the river and make for great wildlife viewing (provided you know which path to venture down). The animal population surrounding this river is huge: every Big Five member is here, along with zebras, giraffes, impalas and various other bush dwellers. The Victoria Falls Safari Lodge (or the Club, for those willing to pay slightly more) is in the same price range as some of the most budget-friendly options on our list, with rooms starting at less than £140 a night. Booking at The Club, which has all of the amenities of the highest-end luxury hotel such as a personalised butler service and afternoon facials, start from around £215.

While African safaris, for the most part, have become outrageously expensive, India's parks are more feasible. Offering incredible diversity - from scouting out tigers in Corbett National Park to seeing snow leopards in the Ladakh region bordering the Himalayas - a safari in India is no second-rate experience. Head to Kanha - the area that inspired The Jungle Book - an expansive reserve best known for its tigers and landscapes. Stay at Banjaar Tola, a safari lodge built onto the banks of the Banjaar River (where Baloo drifted along with Mowgli resting on his belly). The hotel offers candlelit dinners by the river, spacious tents and five-star service for less than your average New York boutique hotel per night. After a dip in the pool, set out in a safari car to see the region's famed tigers, as well as elephants, monkeys and jackals, and stop for some riverside naan on your return.

While Kenya, Tanzania and South Africa are probably the first places that spring to mind when envisioning an African safari, the Mole region in northern Ghana is a lesser-known spot not to be overlooked. Zaina Lodge offers the nicest accommodation in the area - touted as West Africa's first luxury safari lodge. With a thatched-roof main lodge, treetops adjacent infinity pool and exploration options ranging from walking tours to eco-learning safaris included, the lodge certainly packs a punch. See elephants gathering by watering holes and antelope galloping across plains for as little as £150 per night - relatively affordable when compared to its East African counterparts.

The Okavango Delta, formed by the meeting of the Okavango River and the Kalahari Desert, is a totally unique area from an ecological standpoint, making it one of the most interesting places to go on safari. The region has its share of upmarket accommodations, but there are also several lodges that have an luxe feel but won't leave you in the red. Tuskers Bush Camp is one of the most affordable but feels high-end, thanks to candlelit dinners hosted beneath acacia trees and exclusive, boutique quarters (they only accommodate eight guests at a time). Set out onto the river at sunrise or golden hour to scout out crocodiles and hippos from your private riverboat. Alternatively, opt for a classic driving safari to see the vibrant wildlife population of the delta, including giraffes, lions, cheetahs, rhinos, zebras, baboons and leopards.