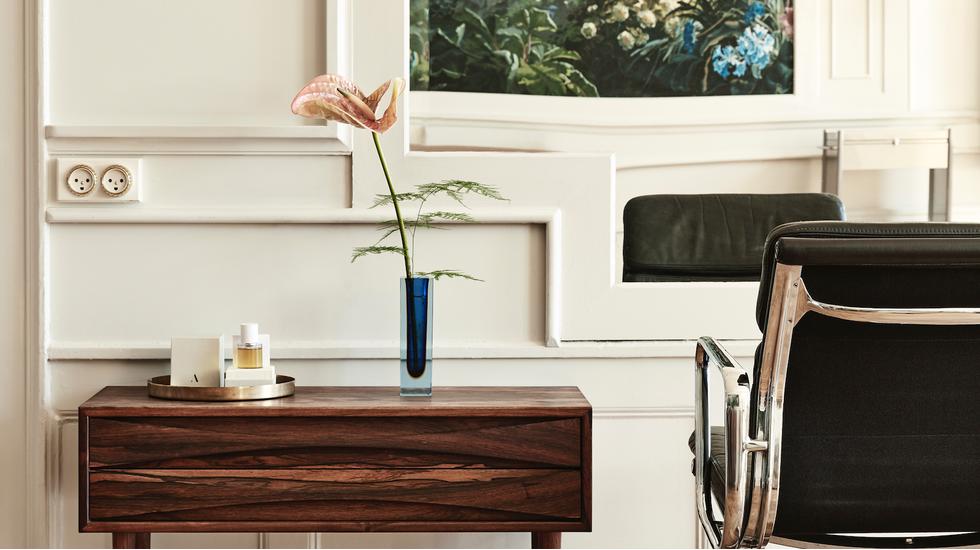 Have Have you ever felt more adorable than when you leave the hairdressers? From the throne of Danish hairstylist-to-the-stars Cim Mahony - the man responsible for Jennifer Lawrence's hit fringe, numerous Vogue covers and fashion campaigns for Yves Saint Laurent - I let you in on what I've learned about Scandinavian grooming.

Stay true to what you love (and brush your hair)

The story of how Studio Cim Mahony came to be is something of a fairy tale. At the tender age of 15, he and long-term studio- and life-partner Lotte Barnholdt met in a seaside town outside Copenhagen, where they reside today. Inspired by his stylist mother, Cim had already begun his formal apprenticeship and wooed Lotte, promising to one day be the best hairdresser in the world.

"I grew up in Faaborg, in a big old house called Den Voigtske Gaard that, back in 1830, was owned by a family whose son was a student friend of Hans Christian Andersen. When visiting, Andersen fell desperately in love with Riborg Voigt, his friend's sister. He dedicated letters, poems and stories to her, but she was betrothed to a wealthy local man," Mahony tells me.

When I visit Studio Cim Mahony one blustery autumn morning, I'm rather tousled in the hair department thanks to a morning dip in the sea. Cim looks at me curiously as we sip coffee and his dachshund Elvis jumps onto my lap. He (Cim, not the dog) asks how often I brush my hair. My silence and blushing might be down to the brisk bike ride along the water, but it also speaks volumes of my mess of a nest, in dire help of some TLC. "You don't own a brush?" he asks. "We're gonna have a talk about that."

This is my first lesson in grooming like a Scandinavian. I can't even remember the last time I used anything other than a wooden hotel cosmetics comb. "The hair is nourished via the blood, and when you brush your hair regularly - specifically with a Mason Pearson hairbrush - you increase blood flow to the root, thereby optimising hair strength and density."

Mahony continues: "The natural oils from the scalp are absorbed by the wild-boar bristles and carted into the length for maximum shine and less weight at the roots, helping achieve full volume. It's a win-win situation."

In pastel-painted rooms decorated with vases of freshly cut flowers, stuccoed ceilings and parquet floors echo with Elvis's pitter-patter. While, Cim calmly deals with my knots and foils me up, he tells me that Andersen was a friend of the family who owns this very building, which lies on the historic Bredgade street, just off Nyhavn. He would likely have hung out in this very room, Cim speculates.

It's said that Andersen's letters to Riborg were uncharacteristically emotional. What he believed was unrequited love was simply a affection that could not be; his writings, a bouquet and a photograph of the poet were found in a secret drawer of his beloved's when she died.

There was a brief time, I'm told, as I pet my new pal Elvis, when Lotte broke things off with Cim when they were just shy of 20 years old. "I practically ate, slept and worked within the confines of a London hair studio workplace at the time," smiles Cim. "I couldn't think of anything else. I was a total, lovesick wreck." Fortuitously the youngsters' separation, emphasised by an ocean between them, was brief and Lotte hopped to London to be with her love.

In typically Nordic style (the term "Nordic countries" being a broad term for Denmark, Norway, Sweden, Finland and Iceland, plus Svalbard, Greenland, the Faroe Islands and the Åland Islands), everything is at its most effective and beautiful when it's in its most simple form. Things here are untampered, unspoiled, devastatingly perfect and design conscious.

Let this ethos be a guide for your minimalist mane (and let it be known that Cim will have his way when it comes to radical suggestions involving picture references from your 2015 home-dye job). Soon after I arrive, Cim gently declines my request to go dark blonde, instead mixing up the potions to tone and lift my dark chestnut locks to something that suits me so hard I will now stay forever true to my roots.

I loved the results, and found Cim's gentle but cool assurance and confidence the exact opposite of over-enthusiastic, buoyant, experimental hairdressers I'd woefully trusted in the past. Notably, they were not Scandinavian and the vibe here is far and away from mundane hairdresser chit-chat: "Been anywhere nice on yer holidays?"

This man doesn't succumb to trends; he creates them. We talk about Talk Talk and Prince as he blow dries me.

While London and beyond is still somewhat in the clutches of the kaleidoscopic hues of that Bleach brand hype, such colour play never really made it to Scandinavia. What I'm talking about here isn't an aversion to seafoam-green mermaid tresses (each to their own), however, but actual greenwashing - spreading misleading environmental claims - something unfortunately and unsurprisingly rifer than ever within the grooming and cosmetics industry.

Around 15 years ago, when running a successful studio in London, Cim noticed a shift in the product market and began researching the organic possibilities in the stuff he was stocking and using on clients. By 2007, more than 80 per cent of his kit was clean. Naming no names, Cim tells me about big companies who greenwash and have made their names as organic suppliers, but who run off the power of dubious loopholes and financial get-outs.

What makes something truly organic and sustainable, and not just de rigeur? I ask Cim. "It needs to be common practice, it needs to be lawful," he replies. "Products should contain no PPD [a potential irritant and allergen often found in hair dye] and strictly no ammonia, which poses an airborne risk."

One of the palatial reception rooms in Cim's studio displays an entire wall that looks like a Victorian-meets-New Age apothecary, stacked neatly with Mason Pierce brushes and organic products from all over the globe. Some are from the Vienna-based company Less Is More, described as"'biologically exquisite, naturally pure, completely native, socially fair, future-oriented, clean and consistently transparent".

Scandinavia is, of course, teeming with organic cosmetics brands. Among my favourite items is the herbal shampoo and acai body balm (used all over, including the scalp) by Copenhagen company Rudolph Care. When creator Andrea's body (including her blood) was tested by Greenpeace for harmful substances as part of a chemical footprint campaign, the results were shocking enough for her to create her own line, produced exclusively in Denmark and certified with both the Nordic Swan Ecolabel (the official ecolabel of the Nordic countries) and the European-wide organic certification COSMOS.

Together with Lotte, we enjoy a vegan salad for lunch - while, mid-treatment, I'm covered in film and looking like a tadpole. It's such a comfortable and warm ambience, like lounging with your chicest, city-centre friends among their coffee table books and insane light fixtures. We get to talking about London, music, love and ambition. This is practically a night out - but with better stories.

While the rest of 90s London was busy getting wasted, sleeping in and missing shoots for i-D, The Face, Vogue et al, Cim - then 19 - kept on the straight and narrow, and filled in for some of the major hair players at the time when they were a no-show. He quickly garnered major attention and scooped the prize for World Champion in Ladies' Evening Style at Wembley arena.

Fast forward five years and Cim ran his own London studio, travelled the world styling A-listers' barnets for coveted magazine covers, prestigious red carpets, lauded campaigns and more. A few years ago, he and Lotte returned to Scandinavia, setting up a new life in Copenhagen where today the studio draws the city's glitterati and hosts fashion shows and campaigns for the likes of Saks Potts, Ganni, Helmstedt and other white-hot labels.

Many of my personal idols - Michael Pitt, Charlotte Gainsbourg, Prince Frederik and Princess Mary of Denmark - have had their crowns tended to by Cim. Now I have too, I feel as if there's nothing standing between me and stardom/ royalty /looking my best every day. Should you be visiting Copenhagen, be sure to make an appointment.