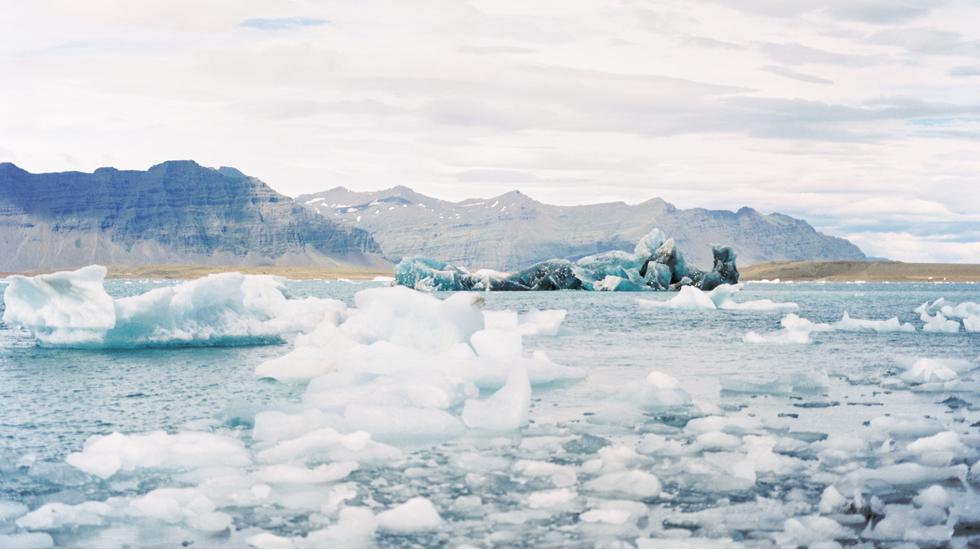 Iceland Iceland is a small island between the North Atlantic and Arctic Ocean. A place defined by dramatic landscapes and vast areas of wilderness where active volcanoes, geysers and monumental glaciers might convince you you'd stepped off the plane and onto another planet.

We arrived at eight o'clock in the evening and picked up a motorhome to help us discover this stunning island at our own pace. Summer time here means long hours of daylight with no real darkness, so we still had time to find some spectacular ice glaciers jutting out of the dark blue ocean. Contrasts are everywhere, like the black sand slammed by the clear white froth of a booming shore break.

Taking a less travelled path, we followed a river which turned into a roaring waterfall cascading between lush green hills in a scene which was more akin to my native Austria. But wait a minute, these hills were on fire! Or so it seemed to my untrained eye. The scientific explanation tells us this natural phenomenon is caused by geothermal activity, where steam escapes from the many cracks and crevices of the mountain.

An incoming weather warning from the motorhome rental agency (and the dark wall of cloud creeping menacingly towards us form Mordor) forced us into cover. Holding up for the night, we endured a veritable lashing of heavy rain and force 11 winds huffing and puffing until I thought it would blow our house on wheels down.

The next day, all was calm. And a week's worth of good weather enabled us to uncover many hidden gems not within brochures and tourist routes. I'll never forget wondering within the magical energy of Fjaorargljufur Canyon or the long hike up Reynisfajall Mountain where we stopped to rest and gaze over the sheer cliffs into the translucent sea, not expecting to find puffins nesting and flying over our heads.

The famous Blue Lagoon allowed us to bathe and relax in an otherworldly moon-scape of cream silicon mud and icy-blue geothermal seawater. Set amid ancient, black lava rock and rising steam quelled by pure Icelandic air, this tranquil haven was inherently different to anything I've ever seen, and the perfect environment to end a most enlightening trip.