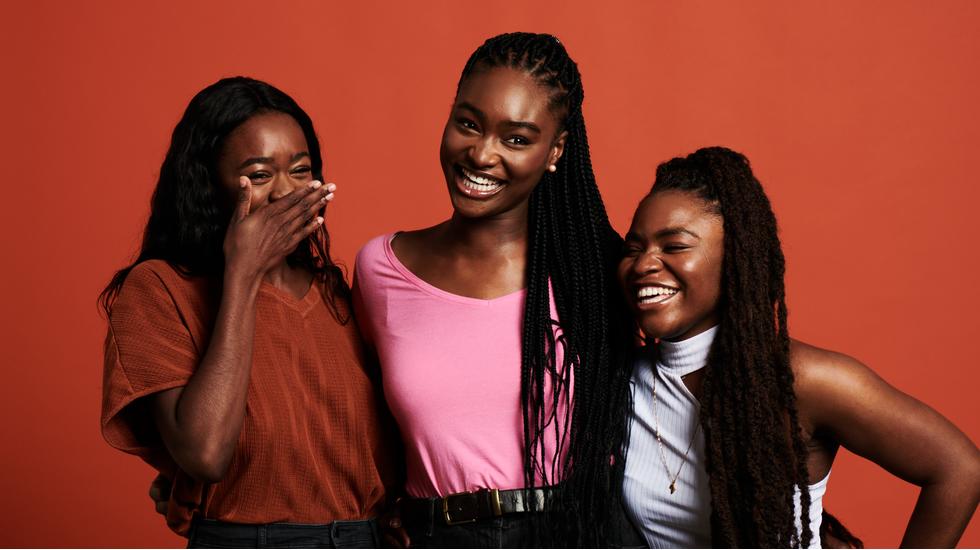 Have Have you ever stopped and asked just why the British curriculum is so white? From the authors we study to the artists we emulate to the hideous atrocities that belie Britain's colonial glory, the education system is a polka-dot of blindspots. It's high time someone did something about it.

Cue: The Black Curriculum, a social enterprise that was founded in 2019 to address the lack of Black British history in the UK's national curriculum. "The central curriculum doesn't outline in much detail the experiences of Black people in Britain, and what that does is it sends the message that we're not part of history, or history hasn't been shaped by us and that's not true," says Lavinya Stennett, founder and CEO of the initiative.

Along with her fellow campaigners, Bethany Thompson and Chantelle Minta, Lavinya sat down with the activist Jaz O'Hara, director Adrián Shankar Filho and Joshua Coombes, founder of Do Something For Nothing to discuss education reform, the nuances of rewriting the history books and exactly how The Black Curriculum came to exist.

Rewriting the History Books: In Conversation with The Black Curriculum

Jaz: Could you give us an introduction to The Black Curriculum?

Lavinya: The Black Curriculum is a social enterprise, and our main aim is to give people a sense of identity through the teachings of Black history, bringing empowerment through knowledge. So we deliver this in UK schools as a syllabus that we created last year, as well as workshops and longer programmes. We also go into schools to help teachers do this better, because our research has shown that there's a lack of confidence, a lack of resources and, more generally, not much of an impetus to teach Black history. That's what we've all experienced here: that the central curriculum doesn't outline in much detail the experiences of Black people in Britain. It sends the message that we're not part of history, or that history hasn't been shaped by us - it's not true. We aim to empower young people through our materials and also teachers to implement this collectively.

Jaz: That's amazing. I think the speed at which it's all come together shows how important it is. How did The Black Curriculum start?

Lavinya: The idea crystallised in New Zealand, but I'd say that my degree in African studies was the eye-opener for me, because I hadn't learned anything about Black history in school. University definitely shaped my ideas of the world, being more grounded in literature and history that was non-European. When I went to New Zealand, I saw how they teach Māori history in schools and I thought well, why can't we have the same thing here? We needed a curriculum, and we needed change on an institutional level, not just individual teachers.

Josh: After coming back from New Zealand, what were your initial steps to start something and bring your ideas into fruition?

Lavinya: I had a sense of urgency; I had to write it down. I applied to an arts foundation to fund the building of the curriculum, and when I came back to London in October, the UK's Black History Month, we got the grant. Over new year, I asked a friend if she could help put together this curriculum. She introduced me to Bethany.

Bethany: And then we met! We sat down and Lavinya explained what she wanted to do and Chantelle and I went through our ideas too. After our first focus group, we started interviewing people to create the syllabus for us. We had content creators, researchers and advisors, and in about four months we created the syllabus. It had four modules: migration; art history; land and the environment; and politics and the legal system, which focuses on contemporary history too. Some of our modules even covered Grenfell Tower.

Chantelle: We talked about not teaching chronologically because people have this mindset that something belongs in a certain period. We see that things that happened 200 years ago, but they didn't start and stop there; they've just morphed into something new. Even with events such as the Windrush scandal, people are being sent home today, though started such a long time ago.

Jaz: What about the last few months? How have they impacted the direction of The Black Curriculum?

Lavinya: Coronavirus shifted a lot of things. We were planning to do workshops in Manchester, but then a load of our bookings were cancelled. So we pivoted and did a contingency plan from April to June which focused on the digital side of things. We started online programmes and animations. The death of George Floyd amplified everything we were doing. It was really interesting to see how things changed. The schools we reached out to before were suddenly getting back to us. So in June, we decided to run a campaign, #TBH365 targeted at the government specifically; there was no better time to take action.

Chantelle: I think people began to listen online. When we started getting more followers it showed that we were doing something right. The day we launched #TBH365, we started with 1,350 followers on Instagram, and by the end we were on 11k. In that same week, we hit 74k.

Josh: What I love about the #TBH365 campaign is the message that it's not just one month, that we should learn about Black history 365 days a year. Was this your first campaign or did you have any campaigns before?

Bethany: TBH was running since we started on social media, but we focused on a two-week campaign period in which we wanted to get a response and generate interest. I think it was successful; the campaign started partnerships and got people listening. And also I think it helped people recognise that schools teach a lot of American history, like Rosa Parks and Martin Luther King. Of course they are important, but that's not Black British history.

Josh: You're completely right, the small amount of Black history we are taught in school is focussed on America and doesn't stray far from the slave trade. You only learn about things like Windrush as an adult.

Jaz: I guess what we need in the UK is for the government to start taking action to implement this and make it mandatory in the curriculum. I saw that you guys had this amazing win recently with a response from Nick Gibb [Minister of State for School Standards]. Is the government supportive?

Lavinya: I guess it's important for the government to recognise us, but it's not essential as they don't set the rules on everything taught in schools. Most schools still follow their own curriculum. We had conversations with different people in politics, outside of politics and we gained support from over 45 MPs across different parties. One response acknowledged the work that we do but said that they didn't have time to address it because of Covid.

Adrian: I also want to ask: as individuals, how have you felt over the last few months with this intersection of Covid and the George Floyd protests?

Bethany: Tired. I joined The Black Curriculum before everything happened, when it was still small on social media and working things out. When everything blew up there was just so much noise. I wouldn't call myself an activist, but being involved in certain movements was tiring, having to redress the same issues that we have always been talking about. I think one thing that exhausted me personally was just seeing the devaluing of Black women. Black women are also victims of police brutality. We have this whole other layer to deal with. But it was good to have support networks like The Black Curriculum where you can talk to others and express how you feel.

Chantelle: I think it's also been eye-opening because we've known this as an issue for so long. In some ways, it's like we can breathe now; we don't have to constantly fight. It's there, it's right in front of you and now people are recognising it. It's liberating but also tiring because now the scramble is on.