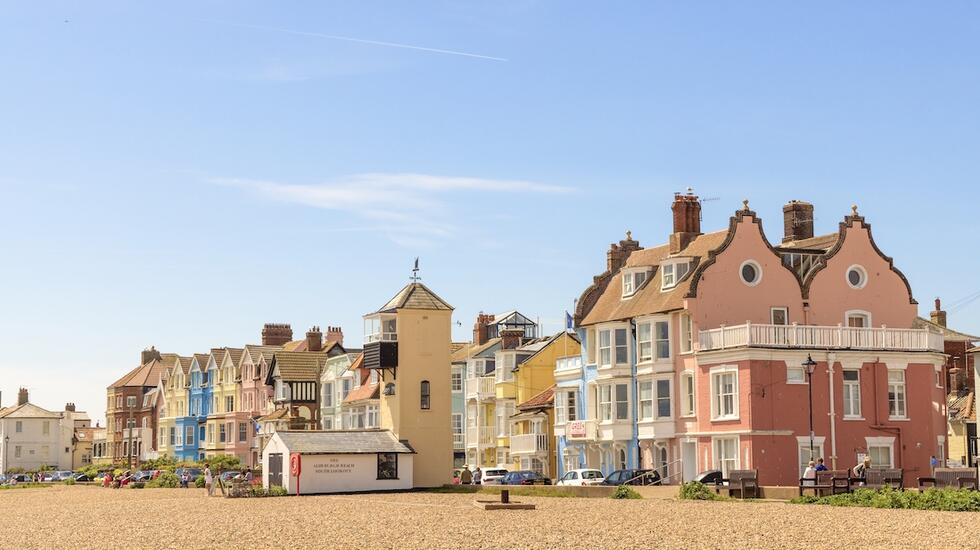 The The origin story behind The Suffolk, a new restaurant with rooms sat beneath the watercolour skies of the county it shares its name with, is a classic cliché. (No judgement here; we stan a love story). When restaurateur George Pell (the former managing director - and now partner - of Soho's L'Escargot) arrived in the sleepy seaside town of Aldeburgh to direct a pop-up project, he wasn't expecting to fall head over heels. Ergo, he did, wooed by wide skies, shingle beaches and the tiptop local produce.

"When the freehold became available for the building, I thought it was too good an opportunity to pass up," he says. "I was excited at the chance to bring a sense of life and purpose back to this great spot and make it, once again, the heartbeat of Aldeburgh."

Take a slow stroll through Aldeburgh and it's easy to understand the appeal. Blustery beaches, pastel-hued terraces, independent stores and artisan bakeries put the destination in contention with the likes of Hastings, Frome and Southwold for the UK's most picturesque place. Pell's new restaurant, housed within the storied walls of a 17th-century inn, The Suffolk, opened in August. The 60-cover Sur-Mer is already welcoming dinners, with six softly hued rooms open for bookings by September's end. The menu from head chef James Jay is a tribute to a Blighty beach barbecue (if your pit set-up is more "G7 leaders frolicking al fresco" than "foil barbie in the dunes"). Of a hefty spread of dishes, Pell picks the signature shellfish bisque as his favourite, followed closely by a samphire butter-doused monkfish tail cooked over hot coals. Where possible, produce is sourced from the area, including dairy from an acclaimed Fenland cheesemaker and oysters hatched down the coast.

Likewise, much of the furniture and curios set to fill the six rooms was found in antique stores across town. It's a pretty parcel of a seaside escape just under three hours from London by car - and the focus is squarely on feeding guests well, both in and beyond the doors of The Suffolk.

We sat down with George to hear about Aldeburgh's best eateries, markets and gourmet delights, from beachside fry-up breakfasts to five o'clock G&Ts.

Aldeburgh is steeped in history. It's a fishing and boat-building town first, but Benjamin Britten, the great composer, was also born here, which has led to it becoming a home-from-home for creatives. It's a place for people to come and escape; there's a laid-back approach to life here.

When's the best time to visit?

There's something different going on at every time of the year. In winter you see unbelievable sunsets over the marshes and it's all blustery and very romantic. Summer is joyous - especially if you do late-evening walks along the beach.

We're staying at The Suffolk - which room is your favourite?

Rooms aren't quite ready yet - they'll be opening in late-September - but Orford Ness, named after the area of shingle spit just south of Aldeburgh, is the one I'm most looking forward to seeing come to life. You'll get a glorious sea view from the bathtub.

That's our autumn break booked. Where should we head for breakfast?

Aldeburgh Café, near the garden centre at the top of the town, is a great spot for a full English. Many a hangover has been busted there. The local sausage is unbeatable.

What about a low-key lunch?

Aldeburgh Market is a great little deli-come-restaurant if you want to lunch like a local. A dressed crab or kedgeree always goes down a treat, and it's right on the high street, so perfect for a stroll along the beach afterwards.

Best bites for dinner if Sur-Mer is all booked up?

The Lighthouse serves home-cooked, simple fare and has a lovely neighbourhood vibe. I'm partial to their salt and pepper squid. For something a little more spicy, there's Sea Spice - an Indian where all the food has bags of flavour. Such a friendly front-of-house team there, too.

You've got the shacks along the beach in Aldeburgh that serve smoked fish - perfect for a box of prawns by the sea. There's also Butley Oysterage in Orford, run by Bill Pinney, who has some of the best smoked products I've come across. He and his family have been running the place for decades. It's all so simple and delicious. On a cold day I often pop there to devour a fish pie. The oysters are from their oyster beds just up the road (we now serve them at Sur-Mer) and the Dover sole is a triumph of refined elegance.

Any other food-focused spots to make time for?

Maple Farm is the home of Pinch, a new project from chef Alice Norman. She knocks out some of the best pasta outside of Italy, with unreal sauces. For a bit of indulgence, try the epic cruller pastries, which make a great takeaway treat.

Most of the Sur-Mer menu is sourced from local growers and producers - where can we get our mitts on some to take home?

One of my favourite dishes is our cheese course - whipped Baron Bigod with game chips and shallots. Baron Bigod is a brie-style English cheese from Fen Farm Dairy, local to Suffolk, and it's marvellous. Decent cheesemongers all over the country stock it and I would recommend getting your hands on some.

Time for an evening drink - where shall we meet you?

Step back in time just a little and visit the garden terrace at The Wentworth Hotel - the place is like a time machine, in a good way. It's great for a gin and tonic.

Any cultural experiences we should be checking out?

Snape Maltings has a world-renowned concert hall and an amazing antiques centre with shops and cafés. You've got to spend an afternoon moseying around there taking it all in. It's also home to the Aldeburgh Food & Drink Festival, which takes place on 24-25 September - that's a real foodie treat.

We've heard exciting things about the bedroom interiors at The Suffolk - anywhere we can pick up similar pieces?

Yoxford Antiques Centre and Gardens is a local treasure trove - it's where we got lots of bits and bobs for the bedrooms at The Suffolk. It's filled with over 70 independent dealers, selling everything from old books and side tables to grand period furniture.

Anything a drive away that's worth a visit?

Drive to Tunstall Forest (about 20 minutes by car), which has beautiful scenery to explore. You'll see birds galore around these parts, like nightjars and woodlarks. The air just smells so clean and pure.

Head to Woodbridge to explore the rambling cobbled streets and lovely little boutiques. Be sure to visit New Street Market, too. It's housed in an absolutely stunning building, run by the lovely Sam. She brings together the coolest stuff in fashion and homewares under one roof.

A book to read while we're in town?

Benjamin Britten: A Life in the Twentieth Century by Paul Kildea. It's a fascinating read about the Aldeburgh-born composer, conductor and pianist.

Something to bring back as a souvenir?

A Sur-Mer tote bag filled with wine from Richard Kihl's wine shop on the high street and some local cheese from Slate deli, a few doors down. Perfect!