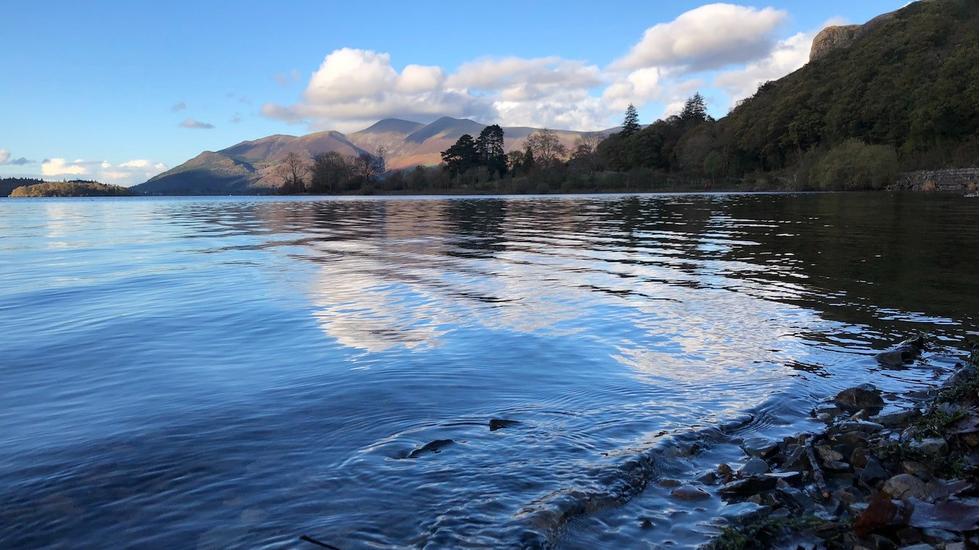 Trace Trace the footsteps of the UK's most celebrated authors, from Virginia Woolf's Sussex to Shakespeare's hometown and the city that bore Harry Potter. We've had a nosey around writers' former homes and romped across the real-life landscapes that inspired their novels to find these destinations worthy of a literary pilgrimage.

High-flyers are ten a penny in Oxford, and sure enough, the city has inspired a host of literary household names. Many of them were academics at the University of Oxford, including J. R. R. Tolkien (who dreamed up Middle Earth while teaching Anglo-Saxon history at Pembroke College), C. S. Lewis, Oscar Wilde, William Golding and later Helen Fielding and Philip Pullman.

Visit Oxford Botanic Gardens to sit on Will and Lyra's bench from the His Dark Materials trilogy, find the doorway to Narnia along St Mary's Passage or pay your respects to The Oxford Dodo (which made its way into Carroll's Alice in Wonderland) at the Oxford Museum of Natural History. Worked up an appetite exploring? Stop by The Eagle and Child pub on St Giles' where The Inklings literary discussion group once gathered in the Rabbit Room.

The English capital has a roll call of great writers and, with them, more literary locations - from the bougie Bloomsbury of Virginia Woolf and co. to the down-and-out Dickensian London - than we could hope to visit in a year, never mind cram into this round-up. Stealing the spotlight is Sherlock Holmes, whose character is as captivating today as when Arthur Conan Doyle created him in 1887.

221B Baker Street is now a museum, and many of the detective's favourite haunts - The Langham hotel, Simpson's in the Strand restaurant - remain. John Keats' Hampstead home is another must-visit; it's where, inspired by birdsong on the Heath, the Romantic poet drafted Ode to a Nightingale. If you get your kicks from memorials, head to Poets' Corner in Westminster Abbey where the likes of Geoffrey Chaucer and Jane Austen are commemorated.

Lit lovers typically gravitate towards the Southbank's Globe Theatre, where actors have trodden the boards since 1599 (with a pinch of salt; the theatre you see today is a reconstruction built in 1997). Hardcore Shakespeare fans make the pilgrimage (read: two-hour drive from London) to the playwright's former home of Stratford-upon-Avon, where you can swoon over Anne Hathaway's cottage before snagging tickets for a Royal Shakespeare Company show. Nevertheless, we want to make much ado about Shakespeare's Way, a footpath that opened in 2006, mimicking the route that its namesake would have taken between his places of work and birth. We're not suggesting you walk the full 240km, but the stretch between Kew and Shakespeare's Globe is particularly lovely. If travel be the food of love, journey on.

A. A. Milne, Virginia Woolf

A. A. Milne hatched the idea for Winnie the Pooh when taking his son, Christopher Robin, on walks around Ashdown Forest - that's Hundred Acre Wood to you and I. An hour's drive south of London, you can stroll through the forest to Gills Lap where "the whole world spread out until it reached the sky" and pass by Owl's Tree before playing a game of Poohsticks à la Pooh, Piglet et al. at Posingford Bridge. Should your writing tastes lean toward the more adult, the Sussex landscape also features heavily in the writings of Virginia Woolf. Though she's often considered a London writer, Woolf and her husband Leonard moved to Monk's House near Rodmell in 1919, where her writing lodge - a room of her own - overlooked Mount Caburn. Of course, she would go on to drown herself in the River Ouse at Lewes in 1941. If this piques your interest, read To The River by Olivia Laing.

A wealth of patriotic Scots have waxed lyrical about the wild Highlands - from Sir Walter Scot's heroic exclamations ("Land of brown heath and shaggy wood / Land of the mountain and the flood / Land of my sires! What mortal hand / Can e'er untie the filial band / That knits me to thy rugged strand") to Nan Shepherd's introspective Living Mountain. Yet it's the Scottish capital's wizarding pedigree that has us under its spell. Be prepared to contend with a gaggle of Potterheads if you drop by Edinburgh's The Elephant House café, where J. K. Rowling wrote Harry Potter and the Philosopher's Stone - by the time she was writing the Deathly Hallows she was holing up in one of The Balmoral's Grand Suites. It's believed that the turrets of George Heriot's School were a forerunner to Hogwarts, while Greyfriars Kirkyard is home to the gravestones of a certain Thomas Riddell and William McGonagall. Coincidence? We think not.

Dickens spent much of his childhood around Chatham Dockyards, holidayed in the seaside town of Broadstairs (where he wrote David Copperfield while overlooking Viking Bay) and spent the last decade of his life in Gads Hill Place in Gravesend. Making something of a heel turn, the Grade II-listed building that inspired Bleak House is now a high-end wedding venue and guest house. A few miles and several centuries away, we encounter the Kent (14th-century Canterbury, to be precise) of Geoffrey Chaucer. The so-called "Father of English literature" wrote the Canterbury Tales in which a hodgepodge of 29 pilgrims travel from Southwark's Tabard Inn to Thomas Becket's shrine at Canterbury Cathedral. The shrine was destroyed by Henry VIII in 1538, but there's a candle now in its place - especially dramatic at evensong.

Together with their clergyman father and dissolute brother, the Brontë sisters lived and wrote in the family's parsonage in the town of Haworth. Visit today (it's now open to the public as a museum) and you'll see why Charlotte, Emily and Anne had such fervent imaginations - it's a pretty cramped spot compared to the brooding moors. Several walking trails take you past landmarks that wormed their way into the sisters' novels - a highlight being Top Withens, a ruined farmhouse which inspired Wuthering Heights. Over in Whitby, the haunting 13th-century ruins (there are, apparently, a lot of ruins in Yorkshire) of the abbey gave Bram Stoker his cue for Dracula. Today you'll have to ascend 199 steps to reach Whitby Abbey, but the North Sea vistas make it well worth the climb.

Such is the beauty and tranquillity of the Lake District that it has inspired countless thinkers, artists and writers - chiefly those of the Romantic predilection. It was on a walk across Grasmere that Wordsworth spotted "golden daffodils… fluttering and dancing in the breeze… tossing their heads in sprightly dance" and thus penned his most famous poem, I Wandered Lonely as a Cloud. Visit Dove Cottage (the poet's former home) for daily readings or the 17th-century Hill Top house, where Beatrix Potter wrote and illustrated her much-loved children's storybooks - bonus points if you spot Peter Rabbit in the garden.

Cornwall's craggy coastline sets the scene for ancient myths and modern tales, spawning the legend of King Arthur - born in Tintagel Castle - along with Alfred, Lord Tennyson's poetry and Winston Graham's Poldark series. Yet few 20th-century writers set as many tales in the area as Daphne du Maurier, who lived in Fowey, first in Ferryside house and later on Menabilly estate (which inspired Manderley in her bestselling work, Rebecca). Today, the desolate moors, creepy creeks and gothic mansions that inspired du Maurier to put pen to paper have changed little. Travel across Bodmin Moor to Jamaica Inn or walk the South West Coast Path from Helford to Frenchman's Creek.

Of English literature's greats, none are so entwined with God's Own County as Thomas Hardy. Conjuring rural Britain of the 1800s, his novels - Far from the Madding Crowd, Tess of the d'Urbervilles - paint a picture of society in flux against a backdrop of Dorset's villages and the dramatic Jurassic Coast. "He looked and smelt like Autumn's very brother," Hardy writes in The Woodlanders. "His face being sunburnt to wheat-colour… his hands clammy with the sweet juice of apples, his hat sprinkled with pips, and everywhere about him the sweet atmosphere of cider… at its first return each season." Indeed many of the author's so-called "Wessex" towns can be mapped onto real-life locations in the South East - Shaston, for instance, is a thinly veiled reference to Shaftesbury. Farther along the coast, readers can trace the fearless footsteps of The Famous Five - the ruins of Corfe Castle (partly demolished by Parliamentarians during the English Civil War) inspired Enid Blyton's Kirrin Island.

Sure, Jane Austen is typically linked with Bath, where she is the focus of various attractions and festivals. Nevertheless, the Pride and Prejudice author's brief stint in the spa town (from 1801 to 1806) was an unhappy one, which is why we're spotlighting Chawton Cottage instead. Having moved to this Alton estate in 1809, she wrote six of her most famous novels including Sense and Sensibility, Northanger Abbey and Persuasion. The cottage now serves as Jane Austen's House Museum and is a 90-minute drive south from London.

Born in Torquay, the creator of Hercule Poirot and Miss Marple spent much of her married life accompanying her archaeologist husband Max Mallowman on digs across the Middle East. Yet every summer from 1938 to 1976, the Queen of Crime would return to the English Riviera to complete and edit her books. Plan your visit in time with the annual International Agatha Christie Festival and follow the Agatha Christie Literary Trail which links 20 local landmarks - the Imperial Hotel, Beacon Cove, Princess Pier - that inspired her works. Set on the wooded banks of the River Dart, Christie's magnificent Greenway mansion is now open to the public - peek inside the boathouse which sparked the idea for Dead Man's Folly, or check in to the self-catered apartment on the top floor.