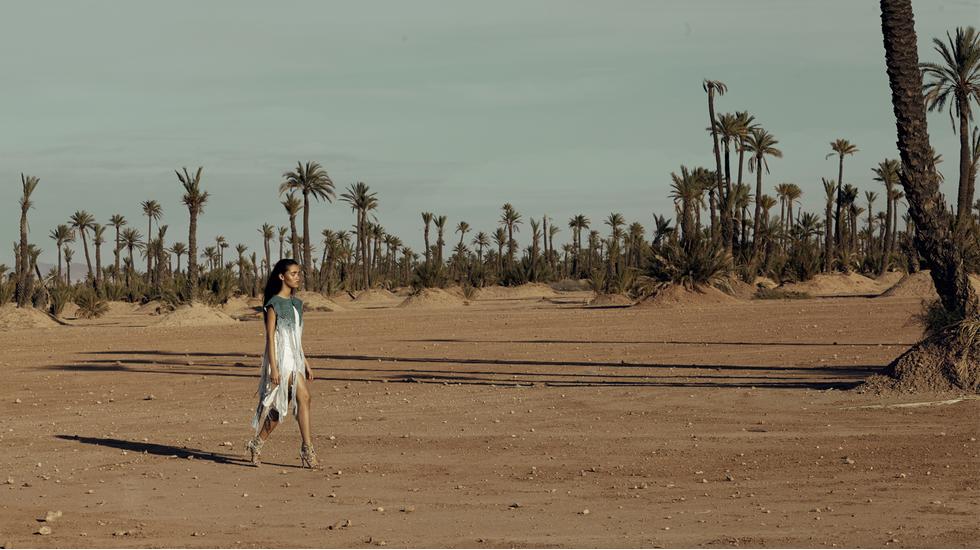 Astor's remark inspired multimedia artist Lina Iris Viktor to paint the walls of her exhibition space at the SCOPE Fair in Art Basel Miami Majorelle blue. She tells art writer Flora Ogilvy: "It was important for me to transport people and create a break in the space-time continuum of art fairs, which feel like endless repetitive mazes."

A basic appreciation of art can enrich our understanding of destinations, but it would be misguided to visit museums in the hope of finding meaning neatly summarised in a series of frames along the walls. It is telling that many galleries have updated their curation techniques to offer more immersive exhibitions, like the Benesse Art Site Naoshima in Japan, which has been described as "the ultimate art pilgrimage". In this age where people have exhausted the importance of experience, sometimes art needs to be lived to be understood.

In New York, the story of 20th-century American art can be traced along the city's streets. Once a hotbed for artists, sky-high rent prices and limited studio space have finally pushed out creatives and many are migrating upstate to the small town of Hudson. But there is still something to be said for paying homage to the city's established galleries in the Upper East Side, walking in the footsteps of Greenwich Village bohemia and the raucous counter-cultural movements of Soho and the Lower East Side - wandering the streets that inspired Louise Bourgeois, Andy Warhol and Patti Smith decades before.

Creativity has less of a price tag attached to it in Mexico City, a capital that offers incredible depth and breadth across every artistic discipline. DF (el Distrito Federal) as the locals call it, or La Ciudad de México as it is now officially known, has a burgeoning fashion scene, a growing number of cutting-edge galleries and design projects that have earned the city the accolade of World Design Capital for 2018. Contributing Editor Alexa Firmenich advises visiting UNAM, Latin America's largest university, explaining: "There you will get a much better sense of what's going on right now than you would at the Frida Kahlo museum." Her thoughtfully curated neighbourhood guide offers a lively snapshot of a megacity whose star is rapidly rising.

A few hundred miles south of the Mexican capital, I met a dynamic cast of creatives in the state of Oaxaca (pronounced wa-ha-ka). Discourse about Mexican folk art is often wrapped up in clichés of magic, folklore and myth, but by opening my mind, I discovered indigenous crafts are now tied to an emerging contemporary scene.

Morocco has a rich artisanal cultural heritage, which continues to thrive in the historic Medina of Marrakech. And thanks in part to the Marrakech Biennale, launched in 2009 by Vanessa Branson, the city has secured an international reputation as a centre for fine art. It was the city's young curators, designers, architects and restaurateurs who caught the imaginations of our food editors. From one of the Medina's many rooftops, Meg Abbott writes: "The future of Marrakech is tied to this small group of creatives". Meanwhile photographer Hassan Hajjaj celebrates his friends - the people he considers to be artists in their own right - in his colourful series My Rock Stars Volume 1.

Just as art can be experienced across different cultures, creativity can be expressed in many different forms. Jasmine and Melissa Hemsley, the poster-sisters for wellbeing, turn to the kitchen to express the art of good food (p. 36), while the poet Cleo Wade uses photographs and words to celebrate her hometown of New Orleans, "a type of Disneyland for art and music lovers".

Art is an industry kept afloat by a number of people working behind the scenes. SUITCASE's CEO Serena Guen takes the opportunity to profile some of the young men and women working in the art world's upper echelons - in foundations and as dealers and critics.

Many of these influencers credit a specific piece of art for inspiring them to pursue a career in the industry. It was initially a challenge for me to understand the idea of an epiphany triggered by artistic brilliance, as it was not something I had ever encountered. But in my first issue as Editor-in-Chief, art has taken me off-canvas, showing me how it can inform travel, help us explore communities and allow us to understand the cultural contexts behind extraordinary creativity.