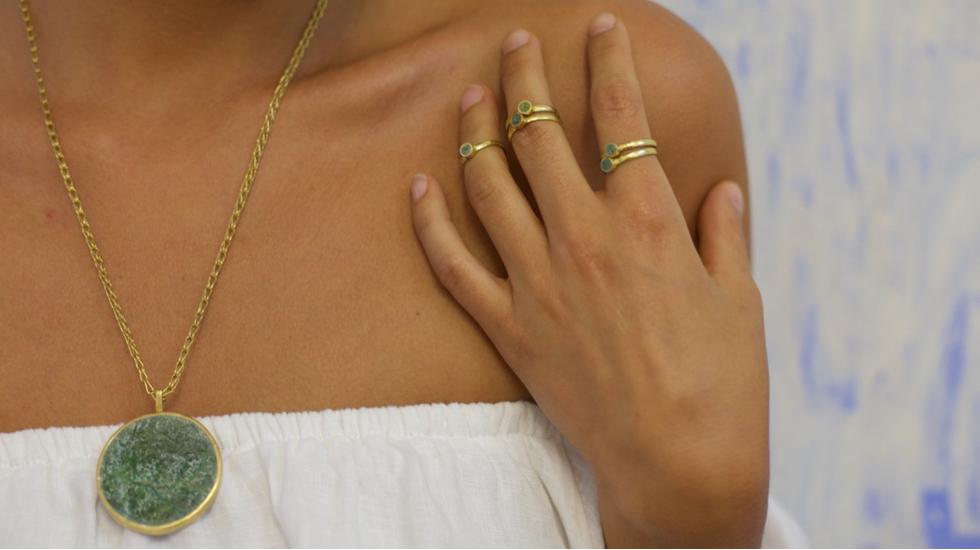 Hearing Hearing Flore and Edmund reminisce about Kabul, I quickly find myself drawn into the romance of Afghanistan. It is hard not be intrigued a country that is so off the beaten track it represents what Edmund calls a "black spot" on the map. Their fond memories go so far as to hint at the idea that this is an emerging destination for travel, much like Colombia 20 years ago.

Not yet though; Afghanistan is still incredibly dangerous. But with ISHKAR the pair have created a way to challenge the narratives that fill western media. "If we understand that Afghans, Syrians and Malians arriving in Europe come from places of extraordinary heritage and culture, integrating them into our communities will be easier than if people only view them as refugees and opportunistic migrants", explains Edmund. Through monthly talks in their shop space - the latest one by award-winning Syrian architect Marwa al Sabouni - carefully researched blogs and films, ISHKAR is revealing a side to war-torn countries which we rarely see.

Currently based between Paris and London, Flore and Edmund met in Afghanistan in 2013. Though both seeking something foreign and unknown, they had different reasons for being in the country. Flore was consulting for organisations including the World Bank and the United Nations, while Edmund was working for Turquoise Mountain, a NGO established by Prince Charles in 2006. Aged 18 and living in Xinjiang, a Chinese province bordering Afghanistan, Edmund was always curious about the country just over the border: "Afghanistan is one of those forbidden places, I was desperate to see the land behind the Foreign Office travel warnings." Flore, on the other hand, was inspired by a French book by Joseph Kessel called Les Cavaliers: "It depicts Afghanistan in a timeless way with mountains, nomads on horses and lively bazaars."

The Kabul they describe is rich in these elements. But the city changed a lot in the years they were there - and even more since. As security declined, concrete blast walls increased and Kabul has become a place where checkpoints and armed men are as common as traffic lights (though the city has few of those, they note). But despite being at war for nearly 40 years, this is a relatively new reality. The city they describe is built on steep hills, decorated with colourful mud-brick houses and surrounded by snow-capped mountains stretching into the distance. Kabul is scattered with crumbling fortresses and markets selling everything from pomegranates to antique swords - as well as one dedicated only to birds.

"The war lords compete to outspend each other on their private zoos" Edmund explains. "They also have this sport where they train female pigeons to respond to flag calls and all the male pigeons follow them. During spring, if you look out over the rooftops of Kabul you see swarms of birds following men with flags below. Like most popular Afghan games there is a fighting element to it; the aim is to fly your pigeons into another group of pigeons and steal the male pigeons away."

So what about ISHKAR's products? The pair only work with craftsmen in countries that have been largely cut off from international markets by conflict and insecurity, purchasing the majority of their products through local NGOs and therefore ensuring profits go back into development projects. A large part of their ethos is keeping ancient craft traditions alive for future generations. "In the last five years, handmade crafts have made a real comeback in the West, both in terms of buying and making. Practising craft has become known for its meditative benefits," explains Flore. So are the Afghan craftsmen driven by this meditative process, perhaps as a way of keeping calm in the chaos? "For most its simply following what their fathers did, and their fathers before that. To think of a job for what it offers you is a luxury in a country like Afghanistan - putting food on the table comes first'."

The problem is the current "craft" trend is a distinctly western phenomenon. In the poorest countries the reverse trend is actually happening. What is chic in Afghanistan is factory-made products which are cheap, smooth and regular. A dramatic contrast to ISHKAR's characterful collections. These products give you a window onto individual behind the product. That's their charm.

So have they noticed any difference in the craftsmen they work with in Mali and Afghanistan? "Their similarities are more striking than their differences", admits Flore "Whether in dusty, manic Kabul, or laid-back Timbuktu, the atmospheres of the workshops and ateliers are identical". Calm, quiet concentration; the feeling of makers who have pride in their work.

Looking to the future, ISHKAR is expanding its scope to work with refugees too. The Pin Project is one of their current campaigns, a joint initiative with social enterprises in the US and Toronto to help displaced persons, returnees and refugees achieve long-term self-reliance through making design-led brooches make pretty gifts.

They also have their sights set on expanding their product line. "We know this amazing Afghan farmer who has been replacing poppy fields with orange and rose orchards and distilling these into essential oils. We want to collaborate and make these into a perfume."

Edmunds sums up ISHKAR: "we don't mind what we sell as long as it is handmade, and has a powerful story. That allows us to sell anything from Kilims, to jewellery and perfume. What connects it all is the ethos behind it."

And if you ever find yourself in Kabul, these are the places to go...

To stay: the Fort of Nine Towers, a crumbling fortress and one of the most evocative inhabited forts in Kabul. It doesn't normally host travellers, but if you know the right people it's an experience not to be missed.

To eat: the bread. There are bakeries everywhere and you can't go wrong. The Afghan bread is so good we almost missed our flight home for it.

To do: walk around the old city walls and visit the Ka Faroshi bird market.

To shop: Chicken Street. Ask for Waheed at Herat Carpets - he'll sort you out.