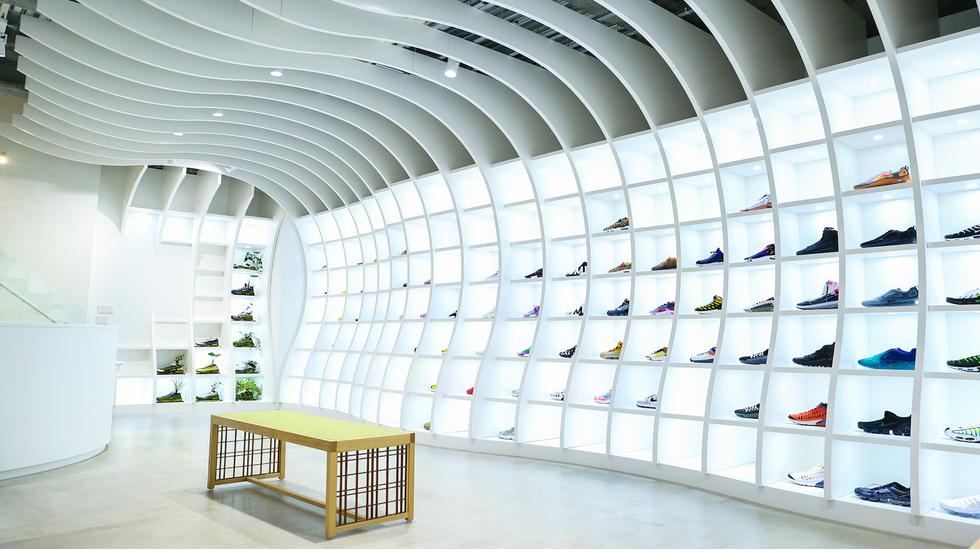 Famed Famed for its hyper-aware streetwear style, Japan's a white-hot stomping ground for sourcing fashionable footwear. Many of the big international brands have tapped into the clued-up market and have started to release region-only exclusives, giving trainer nerds a chance to purchase pairs that aren't being released worldwide.

Most top-drawer trainer stores are situated in the streetwear mecca of Shibuya, but catch a train further afield for the chance to buy one-off collaborations, retro runs and sought-after sneakers from a handful of carefully curated shops.

Having collaborated with pretty much every big name in the business, there's no denying mita Sneaker carries clout. Head to their store in the Ameyoko market area to cop all your standard brands, plus a line of exclusives. We've got our eyes on mita sneakers x ASICS Gel-Lyte III OG.

Those rare Air Force One's you've been eyeing up on StockX? You'll find them here - without the hyper inflated resell price - alongside rows of iconic Nike silhouettes from Virgil Abloh's "The Ten" collab with Nike and rare Reebok Satellite Lows to the extremely limited YEEZY Boost700 MNVN.

Hailed as the Shangri-La of sneakers, Kicks Lab looks like a walk-in wardrobe of sneakerhead dreams. It's stocked floor-to-ceiling with limited-edition models, fresh-off-the-runway pairs and never-seen-before Air Forces.

One of Japan's biggest sportswear stores, it's in Atmos' flagship store in Shibuya that you'll find the "only available in Japan" models of your favourite brands. The two-floor store is a specialist in showcasing new-to-the-market models alongside Tokyo's up-and-coming designers in their gallery space. Also worth a visit is their Sendagay store, who debuted a range of customer-savvy tech.

Japan's biggest and oldest sportswear brand, step into any Onitusuka Tiger store in the country and you'll be met with a rainbow wall of iconic Mexico 66 remakes from the 60s, 70s and 80. Each store is a cornucopia for the avid collector but it's worth noting that the Omotesando shop in Tokyo houses the largest selection of the brand's high-end made-in-Japan collection.

If naff souvenirs aren't for you, consider buying a pair of Hender Schemes - a Japanese artisan footwear brand renowned for their super-exclusive styles. It's a bit like visvim before it went mainstream. Browse the meticulously displayed arsenal in the flagship store in Ebisu.

Situated above SOPHNET's - another streetwear stalwart that's worth browsing - A&S houses a mixture of limited-edition Swoosh footwear and high-end brands, including region-specific releases like Balenciage's two-tone Triple S. Hailed for its clean lines and beautifully designed space, A&S unites the worlds of footwear and Japanese minimalism.

Converse has built a cult following in Japan - you'll see them paired with everything from suits to shorts. Stepping up its shoe game, White Atelier by Converse allows you to customise yours by selecting a colour, adding hand-drawn doodles and tweaking the laces. Your masterpiece will be ready to pick up that evening. Keep an eye out for their pop-up stores in Kyoto, Osaka and Kobe.

Catering to collectors and hardcore trainer fans, SKIT is one of the OG shoe stores in Japan. Hundreds of plastic-wrapped Jumpmans, ASICS and sacai x Nike line the walls with the rarest pairs kept in locked glass cabinets. It's a meticulously honed selection - they hand-pick nearly every make, model and size - definitely worth the 20-minute train journey to Kichijoji from central Tokyo.

Stocking your domestic brands, international bestsellers and an eclectic selection of thrift-store finds - all in small sizes - the ladies-only outpost of Atmos is all bleach-white tiles and pops of neon pink.

Rows upon rows of vintage kicks line the walls at Soma Shimokitazawa in Setagaya. Most are sourced in Japan but a carefully curated selection is also shipped from North America. It's here you'll find a set of original adidas All-Stars and retro, first-release New Balance.

Often likened to Brooklyn, the Daikanyama neighbourhood is a honeypot for the clued-up shopper with its lines of concept stores, brew pubs and co-working spaces. If you're wandering through, stop by Pistacchio Daikanyama. Despite its tiny size, it's garnered a red-hot reputation among trainer aficionados thanks to their ability to announce exclusive drop dates first. Their Instagram is filled with street-style trainer shots and worthy of a follow.

This LA-born brand is the undisputed king of streetwear. Having quickly gained a die-hard following, you'll find their stores popping up in all of Japan's big cities but it's the Cat Street store that you should stop by first - mainly for their coveted Undefeated x adidas designs.

Don't be disheartened by their bargain-basement shop front; inside you'll find a premier collection of always-sold-out Supreme, Off White and YEEZY. Fool's Judge is a lesson in not judging someone on their sneakers - those beat-up kicks could be worth a bomb.