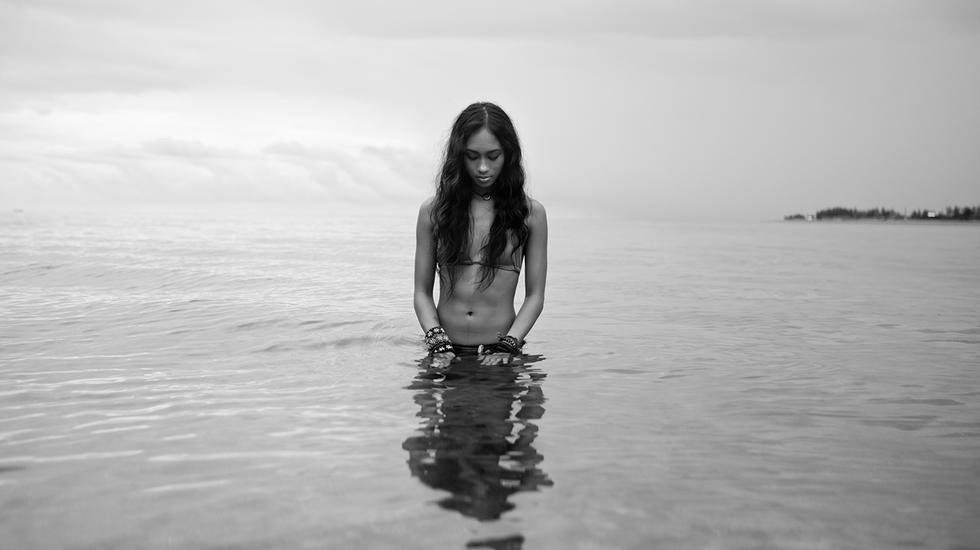 We've We've been floating on a cloud of June Marieezy ever since Juicebox introduced us to her hypnotic tunes last year. But back in March when FKJ (French Kiwi Juice) remixed her track, Fly, we thought we might just sail away. This Saturday there's reason to come back down to earth, as June will be making her London debut at the Juicebox + SUITCASE summer day party at The Shapes terrace in Hackney.

Dubbed the next Jhene Aiko, the influences of this young artist sway back and forth between her hometown Dallas, Texas and her family roots in the Philippines. It was on the Filipino island of Palawan that she recorded most of her music while "listening to nature and travelling inward, living off the sole electromagnetic fields of the Earth."

It's a beautiful coincidence that the country which played a special role in June's musical discovery was also one of our main destinations for Volume 11, The Water Issue. We spoke to June about her time in a treehouse studio in the Philippines, her first show in London and her journey so far.

SUITCASE MAGAZINE: You always write very powerful lyrics, what is your favourite lyric and what does it mean to you?

JUNE MARIEEZY: "Je suis infini, but my body will always bleed." I wrote it in France. It means I am infinite. This comes from my feeling of getting younger but of having lived forever.

SM: You're playing your first show in London with us, what has been your experience of London so far?

JM: In the past two weeks I was able to breathe in Finsbury park, get lost in Notting Hill and was with my mother for her first time in London too. I felt the vibes at Deviation - met Gilles Peterson, Benji B, Sampha, Jamie xx. Just really great sounds being played there. I like how it's more about the music here and less about selling sex.

SM: You were born and raised in Dallas by Filipino parents. How did they find themselves in Dallas?

JM: They moved to Dallas from the Philippines for a better life, school, job, $$$, and a nice house...you know..that American dream. They met there and viola, there I was. I would not be on these travels to the Philippines without their sacrifice, love and support in following my heart. They do think I'm crazy though.

SM: You moved back to the Philippines at age 16. What led you there?

JM: It was a futuristic whisper to say yes to the adventure. It wasn't easy at first (an understatement) especially since I was by myself, but the risk is worth it every time (an even bigger understatement).

SM: What made you stay and why did you leave again?

JM: Musical pathways and the ocean made me stay, family for the holidays made me leave for Dallas. Lack of funds made me stuck, music/Malasimbo Music and the Arts Festival flew me back to the Philippines, getting my passport stolen made me stuck. This time however it was the best problem I have ever had in my life. It forced me to find ways to make sure my income would be greater than the cost of my creations and my off-the-grid lifestyle, which isn't much.

SM: When you are making music there, what was your daily routine?

JM: I've have been making music up in the mountains. I wake up, body scrub, run around for coconuts to open, download information from the sun, go to the beach, read, write, pray, offer thanks to ancestors and nature spirits, meditate, ride motorbikes, capture light (photos/videos), explore sound (music), surf if there are waves.

SM: Where did you make music?

JM: I've always dreamed of a treehouse studio and I stumbled across it in real life while I was there. It is at an artist's residency in an eco-village I am lucky to be a part of with Bahay Kalipay (bahaykalipay.com) who do programs that include everything from raw food programs to yoga and inner dance energy school. I immediately set up in the open space to create while exploring mind, body, spiritual endeavours, listening to nature and travelling inward. Since it is self-sustaining and food naturally grows there, I was living off of the electromagnetic fields of the earth. My solar panels were enough to power all of my music gear. The view is a humbling reminder that my time here is relatively short. The vision of love there is what I was hoping for in this world, which happened to already exist in one of the best islands of the country I hoped to build it in.

SM: What sort of idea of the Philippines did you have before you went?

JM: My grandma would tell me and my cousins a lot of ghost stories. They would also mention how kids in the city streets are starving in the Philippines when I didn't want to finish my food. I realised the gravity of that when I saw for myself.

SM: How has the Philippines changed since you first visited?

JM: I have noticed an influx of people who don't know how to take care of it, and I noticed when there's demand in untouched lands, business people start to come in and strip its purity. One of my favorite serene beaches nearby has coconut trees marked for cutting down. It's kind of fucked up. Some of my friends and I are in the process of buying land so we can protect it from being cut down and abused.

SM: You've said you want to build up a third world country through building up yourself through music. What are the biggest issues facing the Philippines currently? And how do you think you can help generate change?

JM: I'm sure there are millions of problems in the Philippines to mention, but I believe the root of it is deep within the psyche of the people. The environment they live in reflects it like a constant feedback. Living in places off the grid made me sensitive to these different energies. The city (Manila) is a very unhealthy place to live but many people buy in to the hype and forget that we are already blessed with the richness of the land and of ourselves. I want to generate change by teaching through being able to express and create as minimally and harmoniously with the land as possible.