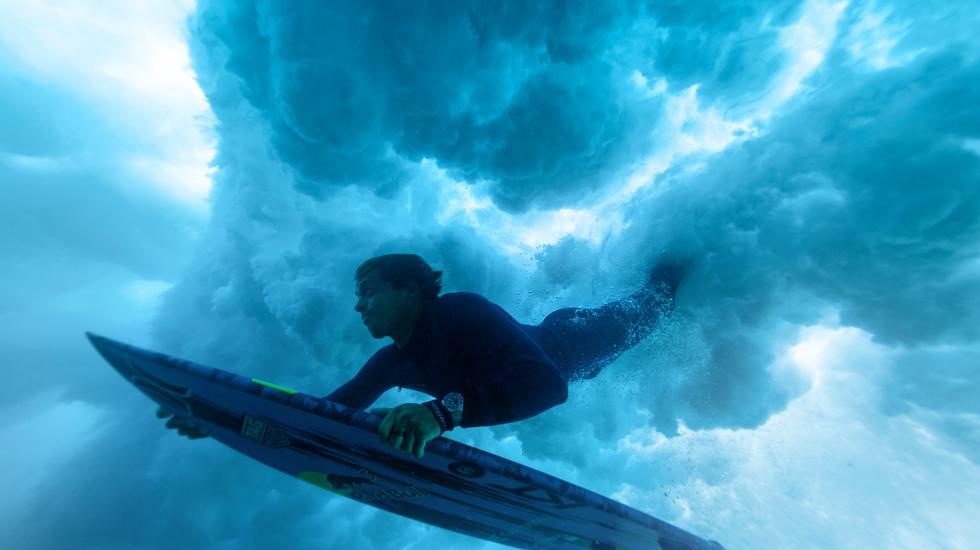 To To seasoned surfers, Kai Lenny is a legend. To adrenaline junkies, an icon. To the uninitiated that have gasped and grimaced at his hair-raising (and viral) YouTube videos as he tames 50ft whoppers, he's crazy. To all, he's the most gifted waterman of our time.

Born and raised in Maui, Hawaii to swell-obsessed parents, Kai became enthralled with surfing from the tender age of five. He quickly graduated from boogie boards to big waves and was behind a kite before the age of ten. You could say he took to surfing like a fish to water.

Today, as a TAG Heuer ambassador, Kai is a multi-hyphenate of the sea. Racking up accolades in stand-up paddleboarding, kitesurfing and big-wave surfing is the result of years spent honing his craft. In addition to gruelling workouts and training camps, the athlete's speed, time and precision has helped him push the boundaries of what many think is humanly possible.

Beyond raw talent, it's Kai's grit, resilience and his meaningful connection with the ocean that has helped him tame waves that are the same height as the White House. This is a man that lives life on the edge. That could mean channelling fear into top performances, slipping into a meditative state when he wipes out, and sheer determination to get back on the water afterwards.

We chatted about how the big-wave surfer deals with failure, the mental strength needed to tackle tsunami-grade waves and how his TAG Heuer Aquaracer is key to defining his legacy.

Where are you from?

I'm from Maui, Hawaii. Born and raised on this cool island in the middle of the Pacific.

How has that shaped and inspired you?

If I'd been born elsewhere, I probably wouldn't be doing what I do. But I was bitten by the surf bug on Maui's South Shore, and since then my life has revolved around the waves.

Growing up in the 90s, watersports such as windsurfing and big-wave surfing were emerging. Stand-up paddleboarding was becoming popular after a 1,000-year hiatus and kitesurfing was being invented in my backyard. It was the pinnacle of watersports and I had a front-row seat to the best watersport athletes on the planet.

Athletes like Dave Kalama, Rush Randle and Laird Hamilton - who became known as the "Strapped Crew" because they were the first to strap their feet to boards - were pushing the boundaries of what was possible in the water. Some kids idolised Superman; to me, these guys were superheroes.

Fear is a tool. You’re able to get much more out of your fight-or-flight instinct and do things you never thought you’d be able to do before.

What else drives you?

It's interesting because, as I've grown, my perceptions and ambitions have completely changed. Right now, my driving force is progression. I need to be in a place, physically and mentally, where I can challenge myself to do things that have never been done.

Physically, I need to make sure my body can endure every minute of sunlight we have. For days on end, I need to be in the water, chasing waves. Mentally, I have to truly believe in the goals I'm chasing. I need to feel it in my bones. Then I go out and do it. It's often hard to reach that mindset because I'm trying to believe in something that I haven't achieved yet. Perseverance, patience and practice are key.

Describe the feeling of big-wave surfing.

Pure bliss. Like you're skipping through the water. It's satisfying but also motivating; you want to chase that euphoria. Sometimes I look at my watch thinking I've been on the water for 45 minutes and I've actually been out there for two and a half hours. I've been lost in a vacuum of fun.

We've watched the Youtube videos. Seen you, mentally and physically on the edge, tackling waves 70ft high. You look fearless…

I'm the furthest thing from fearless. But I do think fear is misinterpreted as negative, something that no one wants to experience. For me, fear is a tool; if channelled correctly, you're able to get much more out of your fight-or-flight instinct. You're about to do things you never thought you'd be able to do before.

What mental strength do you need to succeed at big-wave surfing?

Trust in yourself. At times when I'm riding inside the wave - inside the tube, a big aerial manoeuvre or evening surviving a wipeout - I think: how did I pull that off?

It's not always a conscious effort. Sometimes it's like I'm watching a movie and my body is just unfolding on its own. It's a leap of faith. You have to let go of everything - attachments, fear, anything back on land.

How do you prepare for a wipeout?

When you get hit by a 60ft wave or bigger, you have to do the exact opposite of what your instincts are telling you: to fight and claw your way out of there. You have to relax and go limp. There's no way to fight the ocean, not with that sort of velocity and violence.

I'm happy as long as I know what's around me. That doesn't mean seeing; it's like a sixth sense and I've spent my life working on it. I have to know where the board is, if my body is contorted, which way is up.

Every wipeout feels like a small failure, but then, the ocean is the greatest teacher. It has given me great rides but also the best feeling in the world: surviving.

Has your connection with the ocean helped you overcome any obstacles?

Every wipeout feels like a small failure, but then, the ocean is the greatest teacher. It has given me great rides but also the best feeling in the world: surviving. I've felt scared, like I'm not going to make it out alive but, obviously, I always have. So what am I going to do? Be mad at the ocean? The ocean doesn't care! All I can do is try again. If you give it the right energy, go out with the right state of mind, it comes back in return.

One thing you pack before setting out to surf…

My TAG Heuer Aquaracer is always with me. No matter where I end up, what waves I face, it's the one piece of equipment that always stays on me - it's that durable! I can hand it down to my future kids and say "that watch survived the biggest wave on the planet". The watch is part of my legacy.

Durable. Meaningful. A friend. Every time I glance down, it reminds me how much I've achieved.

How has the TAG Heuer Aquaracer watch helped you achieve greatness?

Time is crucial in a competitive setting and to surviving big waves. I time the frequency of the sets, how long does it take to arrive onto the reef to break, is it three minutes, 10 minutes or, for large waves, half an hour.

Some people think it's luck being in the right place, at the right time to score one of these record-breaking waves, but it's not. It's a lot of methodical planning, reading the forecasts, the data and then referring to my TAG Heuer Aquaracer and timing, to precision, when the next wave break is going to be.

We want to push our bodies to the limits. Do you have any tips?

You need to have the inner willingness to go out and find that opportunity. Not because you got lucky, but because you decided to push yourself. Once you do that you'll either encounter the best ride of your life… or the worst wipeout - on or off the water.

Finally, we caught up with Kai Lenny to get his insider guide to Maui, Hawaii...

What's the first thing we should do when we reach Maui?

Of course, my number one is going to be Jaws, which to the uninitiated, is the break on Pe'ahi where you'll find all the big waves.

Few travellers have Haleakalā volcano on their radar. I love going up to the top of the mountain where you're hovering above the clouds. It's calm. You can gaze out across the rest of the world. I feel very centred there.

What about if we want to hit the beach?

I love the beaches on the South Shore. There's little to no wind so you won't find many waves, but you will find warm water and that typical laid-back, Hawaiian lifestyle.

Somewhere for an adventure-packed day…

You want to head east where you'll find a ton of waterfalls. It feels like you're in Jurassic Park as they gush straight out to the ocean. In terms of waves, some of the best breaks happen in Honolulu.

We want to practise surfing. Where can we go?

Hokitika Beach. I live just down the street and you'll often find me there practicing everything from surfing to kiting. The waves suit any watersport, so I use it as my training ground.