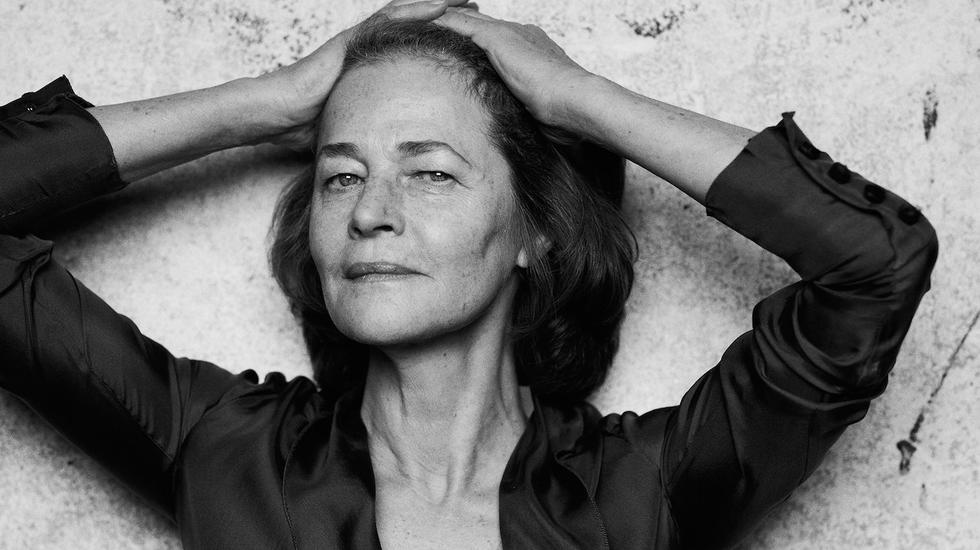 The The first time I met actress Charlotte Rampling was at the Berlin Film Festival in 2012. Just 16 years old at the time, my fascination with Charlotte was akin to that of child's admiration for a cool older cousin. At 66 years old Rampling's haunting beauty and intense, hooded gaze made obvious what led Dirk Bogarde, her co-star in cult classic The Night Porter, to famously label her 'the look' decades earlier.

Rampling has proved herself unashamed to test boundaries in her professional acting career. She has played challenging roles with sensitivity and insight: from her early days in Georgy Girl (1966) where she portrayed a woman completely lacking in maternal instinct, to her role in the immortal nightmare Zardoz (1974); to having an affair with a chimpanzee in Max Mon Amour (1986) and more recently touching on the issue of sex tourism in Heading South (2005).

Unafraid to take on other industries in her stride, Rampling set the fashion world ablaze in 1973 when she became the first woman photographed naked by Helmut Newton. Later she would clutch Juergen Teller to her breasts in a Marc Jacobs campaign and become the face of Nars cosmetics at 68; all confirming Francois Nars' summation of the legend as an "endlessly watchable mystery".

Earning best actress at both Berlin and Edinburgh festivals this year for the film 45 Years (in cinemas this August) Rampling has not finished challenging audiences worldwide. 45 Years explores the long-term relationship of a married couple and the struggles they endure in the run-up to their forty-fifth wedding anniversary. Electra Simon talks to 'La Légende' about beauty, wisdom and enacting your dreams.

ELECTRA SIMON: Your recent film 45 Years exposes the complex structure of a marriage. What do you think is essential in a relationship?

CHARLOTTE RAMPLING: You need a lot of ingredients: tolerance, endurance, the ability to hold the tension. Not overreacting to things and trying to keep a distance are both important. It is a kind of équilibre, like someone walking on a tightrope.

ES: Balancing your own life with someone else's?

CR: Yes, you have to keep your life balanced; you can't just give over to somebody else. That's a real recipe for disaster for both sides. Even though your partner might put you in that position, they will not end up liking you for it.

ES: Right, keep your own interests.

CR: Yes, and keep a certain mystery. Keep things slightly hidden, nothing serious, but keep your life partly to yourself; don't give over everything. That's important, people like that. People like to think they haven't discovered everything about the other person all at once.

ES: In Max Mon Amor, Margret and Max [the chimp] cannot communicate by talking. Do you think a quiet, or even silent, relationship can be more intimate?

CR: I advocate that actually, as I am not a very chatty person. I'm not good socially because I don't understand chitchat. So I lead quite a silent life, and the man I live with is silent too, it's good that way.

ES: So you only really talk when you want to say something meaningful?

CR: Yes, and then the other listens. There is a lot of chitter chatter in our heads that we ought not to share - it is just useless words. Sometimes in a conversation I just pause for a minute and think, 'who is actually listening to anybody?' so I just stop talking.

ES: You have a reputation not just for your professional talents, but also for your unchanging beauty. Do you feel that being physically beautiful gives people an advantage in life?

CR: It is a huge advantage, but it demands its price. It's a God-given gift because people are always attracted to beauty; even as a child you're going to be the one that stands out from everyone else. That is the strange, almost ridiculous thing about beauty; it opens all the doors. But only just; then you really have to know what you are doing and surf this opening very intelligently. Also, the glorious beauty of youth doesn't last. Even if you are a beautiful older women, eyes just aren't looking at you in the same way they did before. Not because you're looking horrible, but because you're not that kind of beautiful anymore, not that 'it' sort of beauty. You need to develop all the other stuff as you grow up. I think that if you have done the interior work inside yourself as you get older; developing as a person and not as just an outside manifestation of yourself, then you have really learnt how to live. Anyone can present themselves with confidence, and that is really attractive.

ES: What is it that makes you choose particular roles?

CR: The role has to call me in; I always need the stories that are psychologically aware. I need to be really interested in the woman that I am going to be playing - it's got to be worth investing in - otherwise I'd much rather do something else. Even when I wasn't earning much, I have always passed by those 'wishy-washy' roles that are going to bore me. As for choosing, I just get that feeling in my stomach, and I have to say yes. That goes back to what we were saying about confidence: I wasn't confident as a youngster, (as youngsters aren't) but I would give the goddamn impression that I was. People thought I was so sure of myself, which of course I wasn't. But I thought, "If I am carrying it off, it must be there somewhere there within me", and I started to believe that inner voice. Then when that inner voice says, "Do it", you believe it. You can ask others, but it is only your voice inside that makes things move.

ES: If you are playing a character that interests you psychologically, is acting almost cathartic for you?

CR: You could say it is therapeutic, because what I wanted to do was to use film to illustrate the life I was leading. It didn't have to necessarily be my life, but a parallel life; people that I could have been, that I might have wanted to be, or were scared of becoming. Investigating these routes was interesting. That is therapeutic, because you can project yourself in to other people's minds and imagine what it would be like to be something to excess.

ES: That sounds just like what character Sarah Morten in Swimming Pool does in her writing: live vicariously through her characters.

ES: What are you most afraid of?

CR: Fear, and what it does to you. We need fear - it's a fuel - but when it overwhelms you it's paralysing. I have been paralysed by fear; there was a moment in my life where I felt like I was carrying the fear of the world on my shoulders.

ES: In The Night Porter, I was enraptured by the infamous scene where you slink around in a pair of braces singing 'Would I wish for trouble times, or purely blissful days? If I had a wish to make - I don't know what I'd say. A little touch of woe, for if it were not part of my life, I'm sure I'd miss it so.' What do you think a life without melancholy and woe would be like?

CR: The thing is, we cannot live without the contrast. We cannot love without hating, or know what satisfaction means without dissatisfaction. We need melancholy to feel deep joy. In films and literature we talk about how lovely it would be if we were all at peace. But if everyone was peaceful the whole time, they'd all be so bored [laughs]. We'd all be apathetic, like in Zardoz; they had nothing to do and they were so bored out of their minds.

ES: So our lives would become purposeless and consequently intolerable. We wouldn't be scared of the world in the same way. But what would you say is the best cure for emotional pain?

CR: To confront it head on. You can't avoid it; nothing will make it go away, tranquillisers will only prolong it. Don't try to work it out; you can't, You just have to go through it. Be your own best friend even if you have no confidence left. Say to yourself "We can do this, it is just a matter of time."

ES: Putting the power to make yourself happy back in your own hands is quite a liberating idea.

CR: Well it is you that is going to have to do it - it is only your attitude that is going to bring about what you could become. But there is also help out there in the atmosphere. Not necessarily God, but just help: you have to ask for it sometimes, and I have done that so much.

ES: For me, asking for something means I have to properly formulate in my head what I want. Just that act of clarification makes my goal easier to obtain.

CR: Absolutely. It is almost scientific. You're telling your own brain; 'If it isn't clear, nothing will change.'