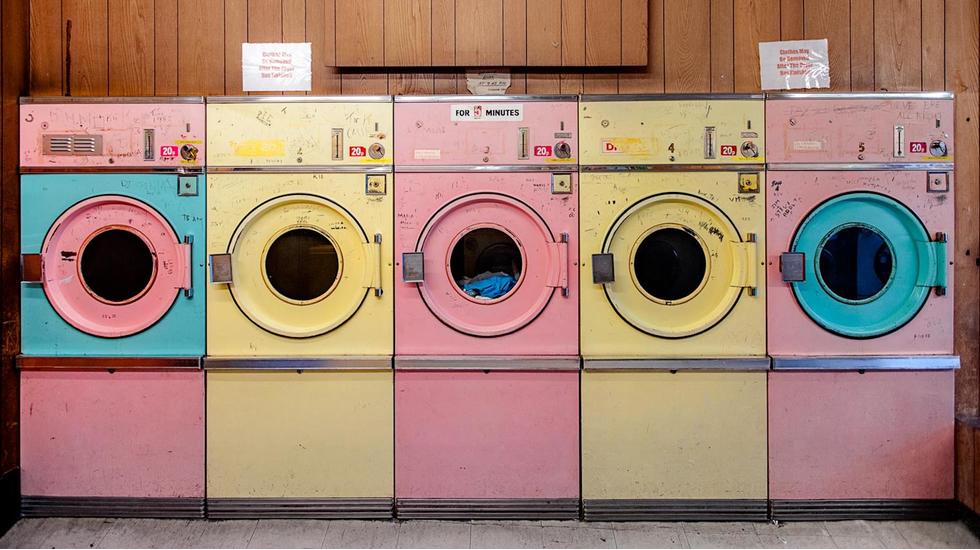 What What is it about launderettes? I've been asked this question a lot over the last two years. I started photographing launderettes in December 2017. My first was Central Wash on Queensway in west London - coincidentally, the first coin-operated launderette in the UK, opened in 1949. I was drawn like a moth to the flood of neon spilling onto the street at night and stood in the road taking pictures.

Before long, I began disappearing at strange times to visit local laundromats and then those farther afield. It wasn't just their compelling geometry or marble-effect wall covering I admired, I loved everything about them. The smell of clean clothes tumbling in dryers; the sound of washers rinsing and spinning; the bright pastel colours particular to launderettes… it was a surfeit of sensation, reassuring and familiar. Those American machines from the 60s and 70s are like catnip to photographers, with their colourful enamel and analogue industrial design. A Speed Queen dryer could make my day, while the Nordwash machines in Colliers Wood, all burgundy and brushed steel, made me skip.

But this fascination with launderettes was about more than retro fetishism. My plan was to visit every launderette in Greater London. To this end, I had a map, a spreadsheet and 462 names.

What started as a portrait of London's launderettes was becoming a portrait of London itself, with each launderette bearing the imprint of the community it served and the customers who visited it. Laundrette owners are a microcosm of London's beautiful, rich cultural diversity and changing urban landscape. In the last 30 years, over three quarters of the city's launderettes have closed. Gentrification, rising rents and changing household habits have all played their part. I was seeing this change happening in real time as I travelled the city. I'd see launderettes boarded up or find ones already converted into a coffee shop or artisan baker. Launderettes I'd visited at the start of my project had closed down 18 months later.

The steady decline of this high-street fixture is especially sad given the unique relationship launderettes have with the local community. They are a space where people come together, noisier than libraries and more inclusive than pubs. For some customers, launderettes might be the only social contact they have all week.

Yet while launderettes struggle in the real world, one place they're flourishing is in our cultural imagination. In the imaginary world conjured by fashion and advertising, launderettes are almost revered. As a photographer, I'll admit to having been enchanted by this sense of nostalgia too. In an increasingly homogenous world - fast, convenient and digital - the launderette is resolutely analogue, both in spirit and practice. It is out of time and out of place - literally and emotionally - simultaneously creating the reason for their appeal and the cause of their decline. A launderette's physical space often contrasted with its emptiness. They have become a living remains of a London that's passing.

Launderama by Joshua Blackburn is published by Hoxton Mini Press.