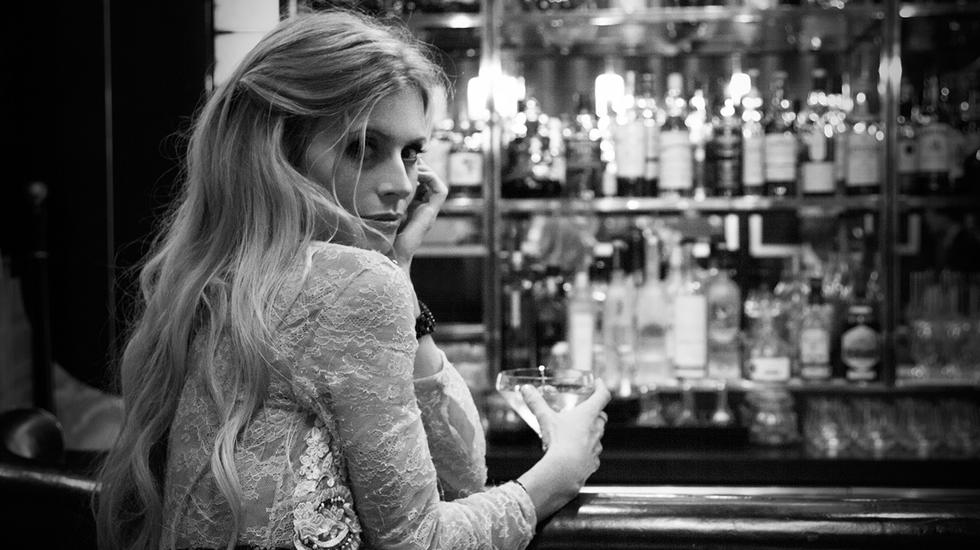 This article first appears in Volume 9: Food and Drink.

The The decadent pursuit of the perfect cocktail hour, evocative of stolen twilight zones and dangerous liaisons. The heady chase of heat and fizz at home or abroad. City memory maps studded with whispered secrets and nocturnal promise. Of all the bars in all the world, here are a few of my favourites from London, Paris and Rome.

A Root Negroni at Spring

Arrive from the Strand at the Courtauld Gallery. With the festive sweep of the courtyard before you, ice rink et al, bear right towards Spring, Skye Gyngell's brave new world - a feast for all the senses. Her exquisite food is the main draw, but I'd be happy to sit for a while on a blush pink sofa or in the garden salon and linger over a seasonal cocktail, or simply the greenest of Granny Smith apple juice, saving the hard liquor for later. The ingredients of October's 'Root Negroni' read like artisanal medicine; beetroot campari, Great King Street whisky, barolo chinato and ginger. Rich winter pickings in a room with a view.

A Bellini at Le Fumoir, Claridge's

Le Fumoir is an open secret, a bar in miniature (12 or so guests maximum), cocooned in the heart of the iconic Claridge's. Thirties décor, old-school charm and a red velvet corner seat in eternal golden twilight. A Bellini is the traditional choice, an optimistic punctuation mark between what remains of the day and the approaching night's promise. Silver-service peach fizz - the epitome of glamour in a momentarily perfect world.

A Godmother at Moral Fox at The Globe

Vodka and amaretto, southern style (along with the accompanying chicken and triple-fried chips.) Sweetness and light vs trouble and strife. As a vegetarian, my Moral Fox diet is purely liquid, but 'The Godmother' has fast become a kind of code amongst a certain group of friends, transmitting a desire for escape, distraction and a cocktail hour or two, a stone's throw from home.

An Old-Fashioned at Le Bristol

Late in Paris. After work. On the way to bed. The siren call of a hotel bar. A desire to be the kind of girl who drinks whisky, not white wine. But I don't know what I like, or how to order it if I did. Overdue a serious education, I copy my friends and opt for a back-in-fashion Old-Fashioned. No fruity frills, no nonsense. Archetypal cocktail alchemy - a spirit, a sweet, a bitter, a sour and water - extra soda my only sheepish violation. And in future, when travelling alone, I'll nurse my whisky at the bar, convincingly lost in thought and film noir fantasies.

After a particularly high-spirited trip to Brazil, it took me a long time to rediscover the Caipirinha. My craving was rekindled at Thoumieux, fuelled by nostalgia and curiosity. The waiter was balancing a tray of ten goblets, as the kind of friends who see each other once or twice a year picked up the threads of old stories in multiple languages on a sugar/cachaça high. The crunch and the squint of a sweet and sour summer, Parisienne-style.

A Mojito at Ferdi

One of my favourite spots in the 1st, Ferdi is consciously 'non chi-chi', and Alicia and Jacques Fontanier have a loyal band of regulars. A mojito wouldn't be my usual choice, but somehow, here, it is the obvious selection, complement- ing both the eclectic ambience and the family-style tapas. There is sometimes a table for two perched on the sleepy street outside where we end up in between- times. The transient restlessness of fashion shows and shoots briefly rooted by a rendezvous at Ferdi. Apero - the French version of happy hour. Precious rituals.

On the edge of Piazza del Popolo, and a stylish stroll from the Spanish Steps, the Hotel de Russie is a perfectly positioned show-off, boasting both the ancient and the modern, style and soul. The picture-perfect courtyard bar mixes martinis for the jet-set by night but it's the morning-after breakfast on the terrace in the vast garden beyond that truly serenades the senses. I hide behind big shades and the Herald Tribune with a Bloody Mary, eavesdropping on la dolce vita.

A Negroni at Pierluigi

An emotional favourite, Pierluigi calls me back. Idyllically perched on the almost secret, sleepy Piazza de Ricci, the restau- rant overachieves with a little help from its miniature cocktail bar on the side, where my friends and I whiled away a summer's night promising to learn Italian. Truly one of the most romantic spots in Rome, the place you tell your friends to go if they have just one night...I order a Negroni. On the rocks. When in Rome.

An Americano at Bar del Fico

Before its makeover, del Fico was part street theatre, part unreconstructed raw 'fico' (meaning 'cool' as well as 'fig' for the tree that marks the spot.) A glossier chic has taken over, but the chain-smoking chess players remain, along with tourists meandering from nearby Piazza Navona and loyal locals savouring aperitivi on their way home from work. A glammed-up neighbourhood landmark with enough rough edges to appease old friends. Prosecco, possibly, or an Americano, alone. An all-Italian cocktail despite the name. A Roman holiday kind of classic.