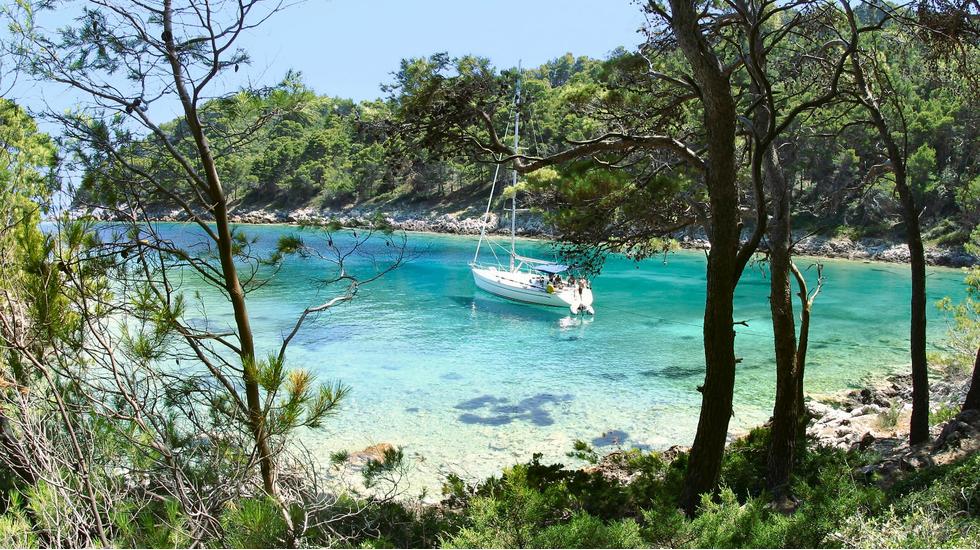 Several Several big names spring to mind when you mention Croatian islands - and we're not talking about that time Beyonce, Leo and our favourite royal redhead frolicked in the Adriatic. The party island of Pag has become synonymous with summer hedonism, while the glitteratti hit up Hvar - often with a yacht in tow. But look beyond the thumping beats and flashing lights of these well-trodden islets and you'll discover a wealth of lesser-known but just as beautiful enclaves. Forget fighting for space on crowded beaches and instead practice the Dalmatian art of "polmalo" (translated to mean "take it easy") among hidden coves, deserted bays and pine-covered forests.

The furthest island from mainland Split, Vis is halfway to Italy and a popular stop for those sailing the Adriatic, though remains less crowded than the larger islands. Despite carrying the accolade of one of the beast beaches in Europe, Stiniva beach doesn't attract the same hoards - partly due to the fact the horseshoe, white-pebbled cove is obscured from view from passing boats and largely due to the difficulty in accessing it. Choose between descending a narrow, cliff-clutching path or hop aboard a small vessel from neighbouring Rukavac. When you tire of the beach, climb Mount Hum for views of Italy across Komiža bay. Come dinner, Konoba Jastožera is widely cited as securing Vis' reputation as the culinary hub of Croatia. Head to this old lobster pothouse for catch of the day grilled, creamed, steamed or paired with a hearty portion of linguine.

A third of this idyllic island is occupied by Mljet National Park, while the other part is covered in dense forest with a smattering of small fishing villages. Better suited for those who favour walking shoes over bikinis, rent a kayak to explore the two saltwater lakes and paddle through the channel that connects them both. Tourists are deposited in Sobra as the lakes make for a popular day trip, so to avoid any contact with snap-happy holidaymakers head to the islands oldest hotel, the Odisej Mljet. From here you can explore the lush foliage before heading to a trio of sandy beaches in Saplunara on the island's eastern tip. Resist the temptation to settle on the first beach and instead continue through to the third, which you'll have almost to yourself (though Prince Charles is said to be a fan).

Nicknamed the "emerald isle", Korčula is renowned for its sprawling olive groves and vineyards producing crisp, dry white wine called grk, cultivated from grapes found only in Dalmatia. What it's less well-known for is softly powdered beaches - of which there are three - that offer a welcome alternative to the otherwise pebbly Croatian coast. Between early morning wine tastings (island life has no regard for convention) peddle through the narrow lanes lined with grape vines to Lumbarda, where a crescent of soft sand awaits. Ancient Greek settlers dubbed the isle the "black Corfu" due to its rich resources, yet despite its similarities it has not yet received an influx of tourists. Take advantage of the solitude and check into Kis Residence, situated just outside the bustling city Račišće. Wake up to the soft sounds of lapping waves and the smell of freshly baked bread, as owner/chef Veselka "borrows" produce from neighbouring gardens to whisk up an overwhelming breakfast display each morning.

Probably the most known on this list but still often overlooked, Brač is a good option for those who still want a toe in the heady Croatia scene. As the main entry point to the island, Supetar is the busiest town while on the other side of the island Bol brings in crowds of sun seekers due its seafront proximity. Ignore both and opt to stay in Postira, where the rolling hills and fig trees flank whitewashed buildings. Zlatni Rat beach in Bol is the most obvious choice for whiling away sun-filled days, so ditch those packed sands and head instead for the tiny Lovrecina Bay. Best to bring a picnic, as the single beach bar is limited in its offerings.

Close to Split in terms of proximity, but miles away in terms of pace. Wave goodbye to the crowded shores and ride the short ferry over to Rogač. Although attractive and easily reachable, Šešula Bay features on plenty of excursions itineraries so go it alone and travel up to Zaglav Bay. Only a smattering of houses line the sparkling waters meaning the rocky cove remains largely undisturbed. Sample the wildflower honey that is unique to the island, while the olive oil that accompanies every bowl of bread is worth transporting back home in bulk. Most of the accommodation on Śolta can be found in charming guesthouses or family-run apartments, except the converted baroque castle Martinis Marchi. Stealing the spotlight from the mainland high-end offerings, arrive in style by speedboat and be whisked away to one of seven exquisite suites.

Car free, carefree and sparsely populated, Lopud is the most developed of the Elafiti trio - despite being home to just 200 people. The sandy coves of Sanj bay are easily reachable by bicycle or take a pleasant stroll through the dusty tracks framed lush vegetation. Venture the seafront promenade of Lopund (also the name of the islands only village) come nightfall where it is brimming with feverish activity. Slightly set apart from the small collection of restaurants hugging the harbour is RobiNzoon. The family-run affair offers homely dishes like lamb chops served with rosemary potatoes - a welcome change from the plentiful seafood offering.

Despite being the most populated island in the Adriatic, Krk is also one of the most underrated. Connected to the main land by a bridge, remnants of Roman occupation are evident in the main town, while the shores of Stara Baška are lined with peaceful, flat-rock beaches. Stay in the medieval town of Vrbnik, perched on a limestone outcropping that fiercely juts out to sea. The narrow labyrinth of lanes lead onto small, organic vineyards harvesting Žlahtina, a dry white wine produced solely in the region. After spending a view days sampling the local grape, continue your Adriatic adventure with ease as Krk is easily connected to the rest of the archipelago.

Hailed as one of Croatia's best kept secrets, the sleepy fishing island of Dugi Otok consist of just twelve small villages, each as charming as the next. With its sun-bleached houses, summer festivities and vicinity to nature park Telašćica, Sali is the best connected. Head to the North side of the island to seek out the intense, azure waters of Sakarun beach, a paradise void of pebbles with an uncanny resemblance to Carribean sands. Watch over the island pines from your lighthouse apartment, housed in the 19th century Veli Rat (located next to Sakarun beach) the novel lodgings boasts the arguably the best view on the island, plus the necessary 21st century mod cons and a lighthouse keeper thrown in. Should you wish to venture out from your blissful solitude, the marble-paved city of Zadar is just a two-hour ferry ride away.

Encircled by ancient walls, Rab is a cultural jewel in Croatia's crown. Rab Town is a haven of whitewashed buildings, rust-red roofs and four soaring bell towers. Take time learning the history of the island (which dates back to 360BC) by visiting the cluster of churches found in the picturesque old town. Throughout the summer months, regular fisherman nights are hosted in the marina, where you'll more than a bellyful of fresh fish sizzling on ramshackle barbecues. The secluded beaches, that were once a haven for naturists (and allegedly scandalous royals), still have a bohemian edge meaning clothing is largely optional. Soak up the rays at nudist Sahara, or cover up at Cifnita.

Cres has stolen the best parts of each island and slung them together. Beach bums should head to Sveti Ivan; almost always deserted, the cove twinkles below the medieval village of Lubenice and the bay is perfectly tranquil for aimless star gazing. Ramblers should stay in the north of the island in Beli, situated near to the hiking trails that run through the heart of the Tramuntana forest. Staying in the mini-capital Cres Town will give you the best of both. Elements of its Venetian rule are weaved through the renaissance, pastel architecture and evident in the grand collection housed at the Venetian palace. When it comes to food, having once been the site of three entrepreneurial siblings selling ice cream on the waterfront, MaMaLu now steals the crown as Cres's best restaurant. Still family-run, the fish is fresh, simple and the portions are huge.