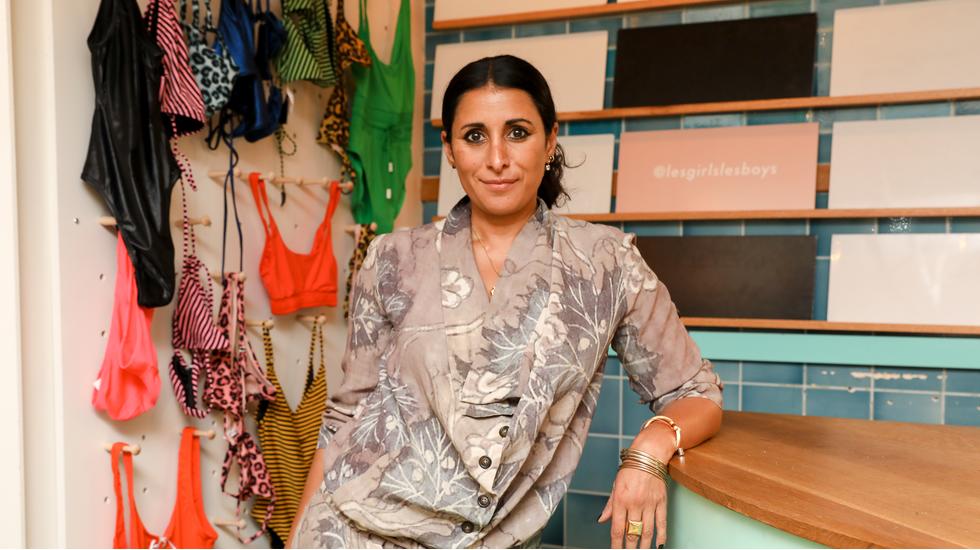 Launched in 2017, les girls les boys is "cross-generational, cross-cultural and cross-gender". Subverting gender norms, the brand is all about empowerment. Basics are its bread and butter - think comfy tracksuit bottoms, simple shirts and plain underwear - but the collection is vamped up with add ons of velvet swimwear and tiny triangle bikini tops.

We checked in with Rees at the Freehand in New York, where the brand is taking over the hotel's The Shoppe for the summer. We may have done some browsing (and buying) while we were there.

I am a Londoner, born and bred. I've lived here practically my whole life, and a few other places in between, but I am a Londoner. London has totally shaped me into the person that I am today and inspired me on every level. When I step out onto the street, the people I see, the things I see - everything from art, music, fashion, odd strange people, cool people, the nature in our parks - inspire me on a daily basis. I love it, and I can't imagine living anywhere else.

What's the last city you visited?

New York City - we've just opened an office for our US les girls les boys team so I was out there visiting them.

We've just opened two new pop-ups - our first-ever New York pop-up shop in the Freehand hotel (open until 30 July) and a swim pop-up shop on the west side of NYC celebrating World Oceans Month (open until 19th July). A portion of proceeds from the swim pop-up (and any swimwear purchased online) will benefit the 100k Initiative to reduce single-use plastics and help protect marine wildlife.

Why do you think pop-up shops have become so popular?

Retail has become so extremely expensive, and many businesses have started to work direct-to-consumer - only talking to their customer online and through social media - that they lost that feeling of experience. You can experience a brand only to a certain degree online. I have had many shops in my career and I really believe in retail; I think it's a wonderful thing. Pop-ups give brands the opportunity to create an experience for a day, a week, a month or six months and try out different ideas. You can make your customer think in a different way, let them experience your brand in a different way, in different cities and see what works for you as a brand.

What other hotels would you like to see your designs in?

Any hotel with a swimming pool! I love hotels; I would actually be quite happy to live in a hotel or several hotels - high and low. I'd like Les Girls Les Boys to be in a hotel that preempts your needs and wants. It's quite interesting the things that we forget when we are packing, and it's nice when a hotel has a shop that stocks everyday items like underwear, t-shirts, swimwear and even a comfy pair of sweats. That's the sign of a great hotel - making people feel comfortable and letting them enjoy their experience there.

Tell us about your design process…

Because we are young brand, we always start with what this brand is, what this brand means, what the people we design for want and how they live, how they exist and how they want to be. So our design process is quite easy, and it's very different for other ready-to-wear designers who have to think about what theme they are doing this season, you know is it "Eskimo-meets-cowboy in the desert" or something like that; it's not like that for us. Les Girls Les Boys is a way of life, a way of being and about our connections and relationships with other people and indeed ourselves. Throughout every single day of every week, I am constantly looking at things around me, taking and collating references on a daily basis. When I get to the beginning of the season, I bring all of it together, I brief my design team on our direction and we work as a team to design the collection.

What creative references you return to time and time again…

It's interesting because my creative references are the same as some of the creative references I had when I was 24. So again, my references are art, music, fashion; it could even be certain colours or a scrap of fabric. I recently found a scrapbook from 20 years ago and I looked through it and there are still things that I feel very strongly about and are still relevant to what I think, see and do now. There's photos, cuttings, funny little things that were going on around me that felt important to me, ideas and things that you love and make you click and have attitude.

Considering the brand's name, les girls les boys, does it suggest that the brand is gender fluid?

You state in your Instagram bio that your brand "celebrates the fluidity of love and friendship cross-cultural mindsets and diverse identities". How does it achieve this?

We believe in allowing and encouraging people to be themselves, and be happy as they are, whatever or whoever they are, or however they look and whatever their sexual preference is. We also recognise a generational crossover. We see a mum wearing the same les girls les boys swimsuit as her daughter, a dad wearing the same sweatshirt as his son - it's all types of people sharing clothes, sharing ideas, sharing on Instagram. This concept of "sharing" who you are and what you wear is what makes Les girls Les boys cross-generational, cross-cultural and cross-gender.

You live in London; what are some of your favourite places in the city?

I love the energy, dirt and grit of Soho; I love our beautiful parks; I love being able to walk and drive all over.

Tell us about some interesting destinations your work has taken you.

For our most recent swim collection, we cast and shot the collection on Venice Beach. As we went along, we asked kids and their groups of friends to pick out clothing and we shot it. The light there was spectacular, and the beaches are so endless. I'm used to European shores which are much smaller. Pre-sunset the colour of the sky reflecting on the water, with all the kids hanging out around us, was quite amazing - totally insane but also inspiring.

You state that les girls les boys permeates a new market segment in the apparel industry: "bed to street". What is the best bed you've ever slept in and where is your favourite street in the world?

Best bed? My bed! Not sure if anyone else thinks its the best bed nor am I inviting the rest of the world to come try it either, but it's my favourite in the whole world. Best street? If I had to pinpoint the most magical, I'd have to say the streets of Venice - you never know when you turn the corner if it might be a dead end or something else super exciting.

Do you have any in-flight rituals?

I always take this little cushion from a fab shop called Caravan, my cashmere blanket, always take my own food, I remove all my makeup too - I cleanse my face and put tons of cream on - I don't drink alcohol and do drink loads of water. I like flying because no one can bother me so it's nice to read and watch movies.

In no particular order: Apple Music, MyTaxi, Instagram, iTranslate for when I'm travelling, and a tonne of exercise apps that I've downloaded but don't have the time do… yet.

Don't get angry. There are lots of annoying people in this world and they are in your space and it gets frustrating. Keep calm and enjoy it.

I always pack a Cire Trudon candle, phone and computer charger, a les girls les boys swimsuit (regardless of where I'm going), hoodies and trackies for travel and, of course, too many shoes.