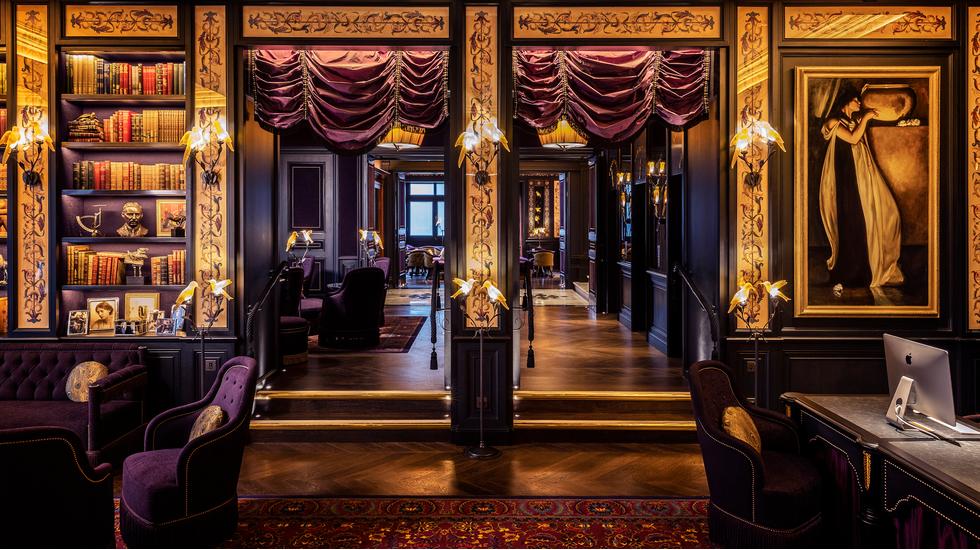 Unapologetically indulgent and just the right side of OTT, L'oscar is a far cry from London's standard industrial-chic hotel. Set in the heart of Holborn, its luxury boudoirs and delectable dining seduce those with a taste for debauchery.

"Every saint has a past; every sinner has a future." - Oscar Wilde

So sets the tone for the first London hotel from Jacques Garcia - the illustrious décorateur behind Hotel Costes in Paris and La Mamounia in Marrakech - who has breathed life into a grade II-listed former baptist church in Holborn with his trademark flair of devilish decadence.

L'oscar's interiors ooze a sense of luxury that begins in the lobby, a heady incarnation of aubergine velvet, glossy black lacquer and lashings of gold reflected in the staff's decadently embroidered uniforms. Garcia's distinctive animal motifs flutter through the hotel in the form of glass kingfishers, woodpeckers and parakeets, each illuminated by a soft glow that emanates warmth into the grey streets outside.

Throw in a seven-storey chandelier, hand-painted peacocks, Doulton fireplaces, pastel stuccoes, crystal butterfly-wing taps and endless marble floors and you'd be forgiven for thinking that this baroque darling has strayed (or indeed crashed head-first) into the wrong side of OTT. But Garcia is no fool, and much like its namesake, L'oscar nails outrageous asceticism, seducing guests with an unapologetic indulgence that is refreshing among the copycat industrial-chic hotels of today.

In its own words, "L'oscar is a place to stay and play". This is a hotel that doesn't take itself too seriously, and we're already wishing the walls could talk.

Thirty-nine bedrooms in eight different categories are individually designed but all done up in similarly ravishing jewel tones with heavy silks, sumptuous carpets and beckoning chaise longues. Beds are so large that they hint at a ménage à trois, while the mammoth bathtub is made for after-dinner bubbles - we were somewhat surprised that champagne was more easily come by than bubble bath, which is not among the bespoke Roja Dove toiletries.

You'll be ordering to the boudoir, of course. The usual avocado sourdough and co., join delectable treats such as fig and blackberry mascarpone with honey and candied almonds, though the sausage bap tickled our fancy. Those who do drag themselves from the bedroom will be rewarded by the top-notch service in laid-back Café L'oscar on the ground floor.

Tony Fleming (of Michelin-starred Angler fame) heads up the Baptist Grill in the mezzanine layer of the domed octagonal chapel. A seasonal British menu revolves around the grill; expect dishes such as Orkney scallops with apple and coriander dressing or colourful coal-roasted beetroots scattered with hazelnuts followed by lemon dover sole, curried shepherd's pie or a choice of steaks.

The extensive wine list is particularly interesting, offering up bottles from Slovenia and Hungary alongside the usual suspects. At lunchtime, pop into Cafe L'oscar for a more relaxed, bistro-style affair.

Yes. Beneath the restaurant, a moodily lit enclave intoxicates with a Saints and Sinners cocktail menu divided into new and old testament via seven heavenly virtues and seven deadly sins. As if you needed further stimulation, DJs, musicians, contortionists, aerial acrobats and theatrical performers provide entertainment throughout the week.

Two private event spaces (The Library and The Committee Room), access to Gymbox a two-minute walk away, 24-hour butler service and free WiFi.

L'oscar has one of the highest staff-to-guest ratios in London.

It's slap bang in the heart of Holborn, which is admittedly not the sexiest part of London. Bypass office workers and lunchtime food chains and make your way into Soho to continue L'oscar's commitment to debauchery. If you want to experience quintessential London, Leather Lane is nearby, as are the Inns of Court. The neoclassical John Soane Museum is also worth a look in.